Former president Bill Clinton and Mayor Bill de Blasio shared the stage today to tout a new Harlem food festival and confirmed they remain as tight as ever.

Since he left Washington in 2001, Mr. Clinton has become a regular in Harlem, choosing the neighborhood to set up his office and foundation. Today, he and Mr. de Blasio stood side-by-side at one of the neighborhood’s best-known restaurants, Red Rooster, to tout Harlem Eat Up, a new food festival slated for May 2015 that promises to enliven the neighborhood.

Even the host of the event, chef Marcus Samuelsson, seemed in awe of the two Bills–appearing in disbelief that he was on stage sandwiched between the political heavyweights.

Mr. de Blasio–playing the role of mayor and MC–offered his unwavering support of Harlem’s renaissance and joked back and forth with Mr. Clinton, his former boss or, as he put it, “the man that’s looming behind me”.”

The two men go back more than a decade. Mr. de Blasio, a former Democratic operative, worked on Mr. Clinton’s re-election efforts in New York and managed his wife, Hillary Clinton’s 2000 campaign for senate. The relationship has remained strong ever since, with both Clintons appearing at the new mayor’s inauguration, and Mr. de Blasio occasionally calling the two for advice.

Indeed, Mr. de Blasio today cited the former president and his family as a constant source of support and wisdom, thanking Mr. Clinton for “taking time to advise me and coach me.”

“When President Clinton speaks, I play close attention. He’s been an incredible wise voice in my life, he’s been an example I borrow from all the time,” Mr. de Blasio said.

Mr. Clinton, meanwhile, there as a converted Harlemite, toasted the festival as a job creator and said he hoped it would encourage people to eat more of the neighborhood’s food, listen to its music, and visit its beautiful churches.

He kept the mood light, joking to the 6-foot-5 mayor that, “You know folks, I was just thinking that, uh, forty years ago, when I got into politics, I was taller than Bill de Blasio. If I could just live long enough, we’ll be seeing eye to eye again.”

He also heaped praise on the mayor saying, “Mr. Mayor, I hope that in some small way Harlem has made its contribution to what is clearly an emerging brilliant first year of your leadership.” 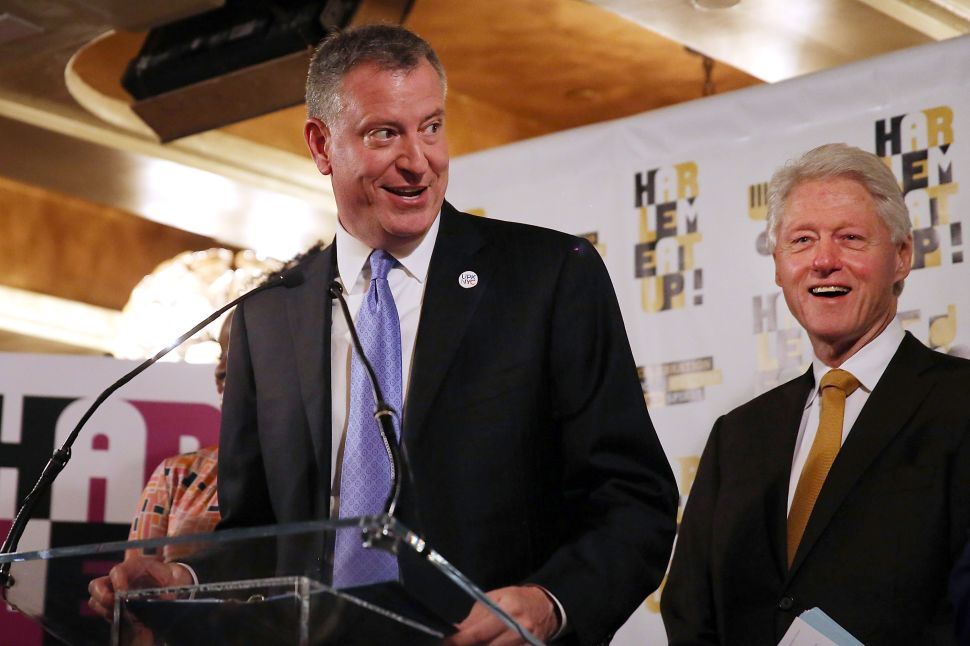