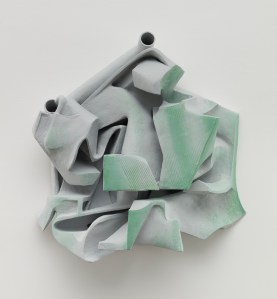 ‘Untitled’ (2014) by Fecteau. (Courtesy the artist and Matthew Marks Gallery)

Vincent Fecteau wears his heart on the wall. At certain angles, it reveals a protean burst of mad gargoyles and respectful silhouettes. But its construction depends so heavily on the flat plane at its back that it would feel disingenuous to look into it any way but head on. Constructed in resin clay from overlapping petals, sharp elbows and obtuse turns and painted in the utilitarian colors of a Scandinavian garbage truck, it’s an organ of its own becoming, the free-form but laborious construction of a complex body around a center of nothingness.

Mr. Fecteau works on multiple pieces at once, and the current show, comprised of the total efforts of his last two years, includes five such iterations of the cardiac seat of his soul, all untitled, along with seven smaller, thoughtfully handsome, mixed-media photo collages. The first heart is shaped roughly like a star of David and painted gray. One corner is white and marked with light scratches like a well-handled plaster cast or the bract of an alabaster rose, a rectangular shape sticking out like the end of a two-by-four is dusted with purplish maroon, and a heavy, greenish block emerges like an animal from Solaris. One protuberance folds down across the piece’s open center like a demurely crossed leg, touching down against a pointy, hoof-shaped piece with a long, straight join where it was sliced through and reattached.

Each beat is the same but different: One has a beige stovepipe for its vena cava, like the heart in a cartoon; another is a green felt yurt; another, off-white, is a futuristic macaroni spaceship, its long, narrow pipe, both ends pointing at the viewer, cocked across the top like a self-reflective telescope. The last is a visual synecdoche for that other ceaseless wellspring of metaphor, the ocean.