Summer can be hell, and we’re not talking about the heat. With the arrival of a stack of oversize, illegible, cream-colored “Save the Date! I’m Getting Married!” cards, New Yorkers begin blocking out prized weekends, booking rental cars to New England and rifling for that perfect flight to San Francisco. Shindigger loves to celebrate amour, but at times, it really depletes our wallet, not to mention the arduous comingling with relatives, exes, enemies and the generally tasteless. But let’s focus on the positive: the booze, the dance floor and those delightfully uncouth encounters taking place in the shrubbery.

“I never deejay weddings,” declared Harley Viera Newton, who was spinning some mean tracks at the début of designer Christine Innamorato’s Bonpoint concept store in Soho, where a who’s who of French New Yorkers had amassed. “You don’t want to be a wedding deejay,” she warned, although she did admit to enjoying the spectacle of drunkenness and debauchery.

“My favorite weddings are those where you’re invited to share an intimate moment with the couple,” said jewelry kingpin Greg Kwiat at the American Museum of Natural History’s 2014 Museum Dance. However, he recalled one wedding where “everyone got dressed and ready” and then the groom failed to show. After the bride’s side left, the catastrophe turned ebullient. “There was a great band,” Mr. Kwiat explained.

Spring is also peak time for Shindigger’s semi-annual binge of bridal fashion weeks. First was New York with frothy, romantic gowns from Oscar de la Renta and Amsale, then on to London and Paris, where a client tried on pricey confections from Elie Saab and Alice Temperley, and finally Barcelona, where brands like Rosa Clarà and Pronovias held court, the latter celebrating 50 years of history with a splashy runway show at the Pabellón Italiano de Barcelona.

“I started hearing about Pronovias in Brazil,” said Camila Alves, the wife of Matthew McConaughey and a designer herself. “I’ve become a big fan.” Beside Ms. Alves sat supermodel Bar Refaeli, who yearns for her bridal moment.

“I would celebrate my wedding in the middle of a field with a simple dress, not too loose or tight,” she divulged. “Something practical you can sit, dance or walk in.”

Pronovias’ over-the-top runway show embodied romance to near heavenly proportions. More than 50 bridal looks paraded out of a Mudéjar-style replica of the brand’s flagship store in Seville, a World Heritage landmark.

“The Pronovias fashion show is style, glamour, elegance and a commitment,” cooed Czech model Karolina Kurkova, who closed the event in a sheer, body-con number.

Later, at an enormous banquet in the Museu nacional d’art de Catalunya, in-demand deejay Mia Moretti said, “I’ve seen some extravagant weddings but never that many wedding dresses in one sitting.” Unlike Ms. Viera Newton, Ms. Moretti doesn’t mind playing for the happy day. “There’s something incredible about deejaying a wedding,” she enthused.

Deejay Chelsea Leyland was at the same table gobbling up charcuterie. “I avoid weddings,” she said. But she admitted she would be deejaying the upcoming wedding for Anna Wintour’s son. “You can’t really say ‘no’ to Anna,” she sighed. Otherwise, “if I say ‘wedding deejay,’ it ain’t a compliment.”

“I grew up a wedding singer,” Ms. Menzel told Shindigger after her performance. “There were lots of bridezillas and drunken grooms.” A bit of advice: “Never sing ‘Stand By Your Man’ or ‘Saving All My Love [For You].’ One’s about abuse, and the other is about a man sleeping with a mistress!” 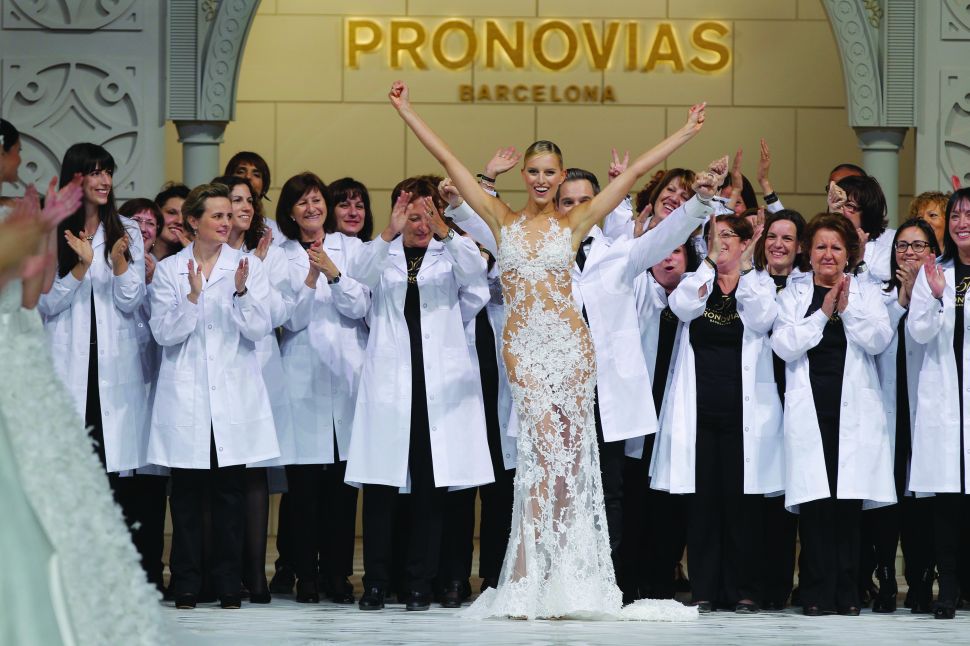