1. Why doesn’t Reek allow himself to be saved by his sister? And why does this prove to Ramsay that he’s capable of transforming back into “pretend” Theon?

Theon, or “Reek” as he now thinks of himself, has been totally Homelanded at this point in the game. He’s a eunuch who has endured so much flaying that his instinct when the door opens in the dog pen is to cringe away from the light, expecting a beating. And remember, Ramsay Bolton first came to Theon as a spying servant sent to save him. He helped Theon escape, killed some of his own men, and claimed he’d help him back to the Iron Islands at the behest of his sister. At the time, it worked as a really good reveal: the show’s writers throwing off rabid fans by introducing Ramsey in a different way and obscuring his identity for the greater part of the episode. Now we see it pay off as a bit of Bolton’s psychological warfare technique that seems pretty ahead of its time. Yara is right: “Theon” is dead, only Reek remains.

Ramsey’s got to be pretty convinced that his broken half-human play toy can do a convincing job pretending to be the man that he used to be in order to do a deal with Moat Cailin (see here for more about that deal), without fearing that Reek would revert back to his old self and betray him. But maybe he’s got one of those Manchurian Candidate code words he can use if Theon tries anything funny.

But he may have miscalculated in letting Theon’s sister, Yara, live. She’s now convinced that Theon is as good as dead to her family, making him a worthless negotiation tool for the Boltons.

2. How does Dany’s conversation with Hizdahr zo Loraq illuminate her developing sense of what it means to be a ruler?

Daenerys’s arc from season one has been from little girl to candidate for the Iron Throne to liberator of Essos. (Well, parts of it, anyway.) But now we’re seeing that being a good person doesn’t necessarily make you a good ruler. (Just look at Tommen, who is nice and all, but is…like…a baby.) Dany’s also finding herself in a little bit of trouble that our current politicians should find familiar: she went and “liberated” all these countries, only to have them implode once she leaves town. Astapor has been retaken by a crazy butcher calling himself “his imperial majesty.” So instead of just charging on with her dragons and armies to take over Westeros, Dany wants to find out if being a queen is actually worth it. Or if she’s good at it. Or something. Which leads us to the most fun part of any type of ruling…dealing with 200+ irate “supplicants” whose goats have been destroyed by your dragons and whose dads you have murdered.

Loraq argues that his dad–who Dany crucified alive as retribution for all those dead slave girls– had actually argued against nailing young children to crosses, but was overruled by Meereen slavers.

“Is it justice to answer one crime with another?” he asks.

“My treatment of the masters was no crime,” Dany replies, sounding a wee bit like Tywin Lannister. “You’d be wise to remember that.” (As opposed to papa Lannister, who tells Jaime that Tyrion’s death for Jofrrey’s poisoning “won’t be murder…it will be justice.”)

Depending on how you look at it, this could be Dany’s first major act of royal hubris: believing that being in power makes you above the rules…in fact, turns your actions into rules. By that logic, what the slavers did to the Meereen girls wasn’t a crime either until Dany infiltrated their troops.

3. So, wait, does Varys also want the Iron Throne? Is his endgame the same as Littlefinger’s? It makes sense…those two hated each other.

Not exactly. “Lord” Varys may have talked a good game tonight in his conversation with  Prince Oberyn and his indictment of Tyrion, but he’s after a much different outcome than Petyr Baelish. In fact, it’s unclear if either of them wants the throne, despite Varys’ knowing glance towards it when he tells Oberyn, “The absence of desire leaves one free to pursue other things.”

Littlefinger just wants the world to burn because he’s bitter and also, chaos ladders. Varys is more like the Lorax, but instead of speaking for the trees, he speaks for the realm. His endgame isn’t to achieve any sort of personal power, but to keep the fate of Westeros secure. He might have his weird predilections like keeping wizards in trunks, but he will sacrifice anyone and anything–Tyrion included–in order to keep the peace. Again, it’s all about subtext, but you could read the Oberyn conversation as Varys saying that having no desires has freed him from seeking the crown for himself.

That being said, Varys’ schpiel about doing what he has to do “for the good of the realm” is starting to sound a little bit like Walter White saying he’s building a meth empire for his family. Who is this guy to say he knows what’s good for the entire fucking kingdom? And though he plays it close to the vest, you know Varys just gets a kick out of feeling way smarter than everyone else in the room…that’s the one thing he and Baelish had in common, and also why they hated each other so goddamn much.

4. Why does Shae betray Tyrion in court?

In the books, Shae turns out to have been a Tywin Lannister plant the entire time. Tyrion has spent years in love with yet another whore who turned out to be on his father’s payroll, just like his first wife. (To people about to freak out about Tysha: I know, but we’re not there yet, okay?)

In the show, they’ve written a more believable motivation for Shae than “super secret sex spy.” For two seasons now, she’s been getting increasingly more resentful of Tyrion’s marriage to Sansa, and has twice refused to be sent away for her own safety. Varys tried to pay her off to leave the kingdom when Cersei and Joffrey were murdering any whores even associated with Tyrion, but this seemed to incite her further. The last straw came when Tyrion pulled a Harry and the Hendersons move…essentially telling her that he had never loved her and she had meant nothing to him. Of course, this was just to make her want to leave and save her life, but you could see how that might hurt a woman’s feelings.

Still, Shae’s mounting stupidity and blindness to reality has culminated in one of the shittiest betrayals thus far. And that’s saying something after Ned’s beheading and the Red Wedding.

In Westeros’ justice system, the people are represented by two separate yet equally important groups…ha, nope. That’s Law & Order. In Westeros’ actual court system, a verdict is obtained one of two ways: either in one of these show trials that make Egypt and Russia look like the Dutch, or in a trial by combat. The first kind, which Tyrion subjected himself to last night, is such a farce that we’ve never seen it in action before this case. If accused, you don’t get your own counsel, and people just come up and slander you while a team of judges (well, usually the king himself) hears the case and then decides your fate. Ned Stark might have had one of these trials had he not confessed, thinking it would save his life.

So far we’ve seen better luck with defendants in trials by combat, where you either fight to the death with someone nominated to represent the people, or you get a witness to fight in your place. Tyrion went through one of these before, when Lysa accused him of murdering her husband at the Eyrie. (Side note: he basically made the same “guilty of being a dwarf” speech then, but it was much more light-hearted.) Bronn stepped up to be his champion and won against the Vale’s combatant, thus Tyrion was “innocent.”

The other time we’ve seen this “fight till the death” justice in action was when Ser Beric Dondarrion challenged the Hound to pay for the Lannisters’ crimes. The Hound killed Dondarrion (who was brought back to life, because sometimes that happens on this show, but never with anyone you care about), and was found innocent. Which brings in a whole other question: Trial by combat is supposed to work because the gods decide your guilt, but Dondarrion and the Brotherhood without Banners don’t even worship the same god as the Lannisters. So why would they keep this anachronistic brand of justice? 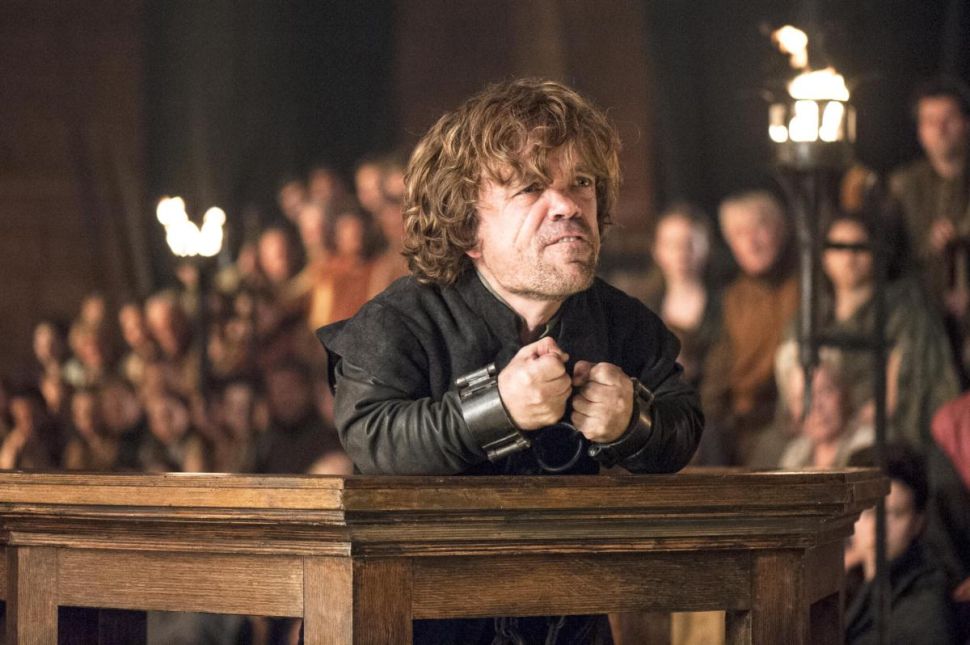