1. What’s up with this Mountain guy? Why is everyone, including Jaime and Bronn, so afraid of him?

Oh, he’s just a terrifying psycho—illustrated in this episode by his merciless disemboweling of prisoners for sport and pleasure—who also happens to be a knight. Gregor Clegane, known as “The Mountain that Rides,” or simply The Mountain, because he is almost eight feet tall and ridiculously strong. He’s the older brother of Sandor “The Hound” Clegane, and is the one who burned the Hound’s face all to shit, apparently because little Sandor was playing with his toys without permission. Some folks think he also killed their father and their sister, both of whom died under “mysterious circumstances.” And sometimes he just kills people he doesn’t like. You know, for funsies.

Dude is a bloodthirsty nightmare. Guys like this are not supposed to become knights, which is considered an title bestowed on only the most honorable men. But Tywin Lannister, who presumably wanted to keep the Mountain around as bodyguard and killer, asked Prince Rhaegar Targaryen to knight him. Later on, during the sack of King’s Landing, the Mountain returned the favor by murdering Rhaegar’s kids and then raping and murdering his wife, Elia (who was Oberyn Martel’s sister, which is why he hates the Mountain so much and is willing to fight on Tyrion’s behalf).

We’ve seen this guy before, but it’s not your fault if you don’t recognize him, since most of the time he was a) wearing armor, and b) played by a totally different actor (two of them, actually). Most memorably, he’s the guy who killed a knight during the jousting tournament in the first season. (People get killed in jousts, but usually by accident. Gregor just full-on kills his opponent on purpose.) And in the same tournament, he beheads his own horse to gain the advantage over his opponent, Cersei’s sparkly fiance Loras Tyrell, and would have killed him too if the Hound hadn’t intervened.

It’s hard to blame Bronn here: nobody wants to fight the Mountain, because you will probably die. It’s sort of hilarious that Tyrion even for a moment thinks that Cersei might choose Meryn Trant—or really anybody else—as her champion. If you have a Mountain, you’re going to use the Mountain.

2. What is Jorah Mormont talking about, telling Daenerys that he sold men into slavery and that Ned Stark could have killed him? When was he a sellsword? And why does Daario call him “Jorah the Andal”?

Originally, Jorah was the head of House Mormon and the lord of Bear Island, a remote island in the north sworn to the Starks and Winterfell. He fell in love with and married a woman who was considered somewhat above his station. She was used to a luxurious life, and when he brought her back to cold, harsh Bear Island, she had trouble adjusting, so he showered gifts on her to try to make her existence as comfortable as possible. And drove himself deeply into debt in the process. Desperate for money, he sold some poachers he had captured into slavery.

Slaving is a huge no-no in Westeros (as opposed to Essos, where it is legal in most cities), and when he was caught, Jorah was sentenced to die. But rather than being beheaded by Ned Stark and his gigantic, gigantic sword of justice (currently enjoying a second life as two Lannister swords, one of which is now in the possession of Brienne of Tarth), he fled with his wife to Essos. While he was there, he did whatever he could for money, including working as a sellsword. Oh, and his wife left him for some rich dude.

In his travels on the eastern continent, Jorah spent a lot of time with the Dothraki, which is how he came to know their language and customs, and was thus so valuable to Daenerys. The Dothraki gave Jorah the nickname Jorah the Andal, Andal being their word for all inhabitants of Westeros (although Jorah, being from the north, is more likely a descendant of the race that preceded the Andals on Westeros, the First Men). Originally while in Daenerys’ service, Jorah was working for Varys as a spy, but he has obviously come to be totally loyal to Dany—he has even been offered a pardon for his slaving ways if he returns to Westeros, but has turned it down.

3. Who is the extremely talkative chef at the inn who tells Brienne that Arya is alive? Where have we seen him before?

That’s Hot Pie! And yes, that’s his real name. Or as much of a real name as he’s got.

He was an orphan boy in Kings Landing who was apprenticed to a baker. Until he was recruited for the Night’s Watch and taken north in the same group that Arya, disguised as a boy, joins after her father is executed, to go look for her brother Jon Snow.

Many adventures ensued: Lannister soldiers looking for Robert Baratheon’s bastard son Gendry attack the group and take them all prisoner at Harrenhal. Hot Pie goes to work in the kitchens there, and Arya, still pretending to be male, becomes Tywin Lannister’s cupbearer. Eventually the Faceless assassin Jaqen H’ghar helps Gendry, Arya and Hot Pie escape…and they are immediately captured by the Brotherhood Without Banners, a group of outlaws that banded together to fight the Lannisters in the Riverlands. They also capture the Hound, who recognizes Arya, and outs her as a girl, and a noble-born one at that.

Eventually Hot Pie is sold by the Brotherhood to the owner of an inn (where Brienne and Podrick find him). As he says to Arya, “It’s not me the Brotherhood wants. My brother’s not a king. I’m not a Stark of Winterhell.” Arya: “It’s Winterfell.” Hot Pie: “Are you sure?” And when they part, he gives her a loaf of bread he baked in the shape of her house symbol, the direwolf

If we know anything about H.P., it is that he is obsessed with two things: food and armor. Brienne gives him an opportunity to talk about both, but eventually he comes around to the topic at hand and gives her both a clue to Arya’s whereabouts and another (better) direwolf loaf.

4. Did Littlefinger have a stroke?

No, though it might seem that way, since the actor, Aidan Gillen, has begun talking exclusively out of the right side of his mouth. Maybe he is method acting? After all, this is the guy who played the character called CIA in The Dark Knight Rises! (This proves nothing one way or the other, but I really wanted a chance to show you this clip.)
[youtube http://www.youtube.com/watch?v=urVn65Dd53I]

5. Why does Brienne of Tarth want to find Sansa Stark if Catelyn Stark is dead?

Brienne is one of those incredibly stubborn-headed individuals (no wonder Jaime thinks she could be a relative of his) who needs a lot of oaths and credos to live by. Since she swore to protect Renly Baratheon (FAIL) and to bring Catelyn her daughters (FAIL FAIL), Brienne is just itching to follow through on one of her assigned duties. Now tasked by Jaime to keep the Stark daughter(s, since Arya is still alive, as Hot Pie confirmed) safe, you’d think Brienne would realize that her mission is doomed to fail…her best bet for keeping those girls healthy is to forget they ever existed. But Brienne, noble though she may be, has never been the smartest haunch of mutton in the butcher shop, so she is off trying to protect the girls from exactly someone like herself, with the best of intentions, who would inevitably land both girls in the last place they should be…namely, King’s Landing.

Think about it: if Podrick is correct and both Stark girls are being taken to the Eyrie and their Aunt Lysa (whom no one seems to know is actually a crazy person), wouldn’t that literally be the chillest place for them to hang out, besides the wall with Jon Snow? They’d be with family in an impenetrable stronghold–one of the final bastions of safety outside of shipping them off to the Free Cities to live with Dany and her dragons or sending them North to find Bran–available. But Brienne infiltrating the Eyrie would compromise their position, as her pledge to Jaime makes her more of a Lannister pawn as she would like to admit. Sure, we all loved Jaime last season, but ever since he raped his sister, we wouldn’t touch his decision-making regarding the Starks with a 10-foot golden hand. After all, what if he tries bargaining with their lives to save Tyrion’s? At least we would understand that kind of filial love. 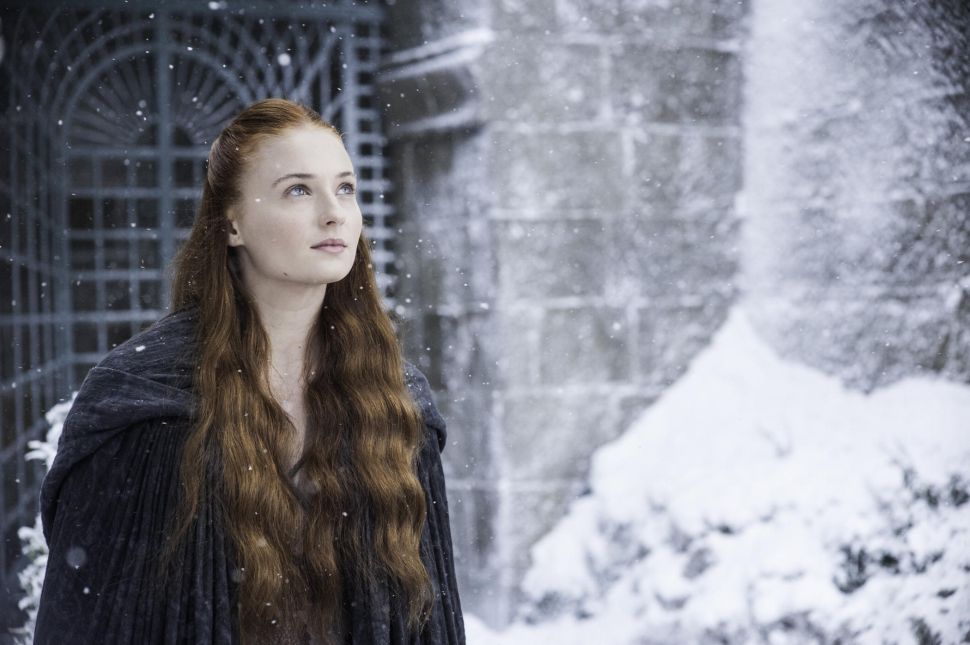