Take a stroll through the aisles of the third edition of the annual Frieze New York art fair on Randall’s Island this week and the commerce, while discreet, will nevertheless be palpable. The VIP preview day on Thursday is all about business. Millions of dollars worth of art will be sold, or put on reserve for future sale. Dealers will sell artworks not on view at the fair based solely on jpegs popped up on iPad screens. And the seeds of future deals will be planted. Less obvious, but just as important, is the art fair’s overall economic impact on New York City.

To try to get an idea of it, Frieze New York recently enlisted Arts and Economics, a firm headed up by art economist Dr. Clare McAndrew—the firm also does analysis for the prestigious TEFAF fair in Maastricht—to draw up figures on what kind of contribution Frieze’s 2013 edition made to New York’s economy. They started with the basics: 940 dealers were employed for at least 17 days, resulting in 15,980 equivalent full days of employment directly in the art trade. (Frieze’s official total attendance for 2013 was 45,000, a figure that does not include exhibitors.)

If those numbers sound high for a young fair, it’s important to remember that Frieze hit the ground running. By the time Frieze launched its first New York edition in 2012, the fair had become an established brand through its 11-year-old annual event in London and, of course, its namesake art magazine, founded in the early 1990s. Over the course of the London fair’s existence, that city has seen an energizing of its contemporary art scene and market, with increased attention paid to the auctions there, a number of new galleries opening and established dealers expanding. The fair has been part of that transformation. But even given all of that, the fair’s most recent London figures are impressive: For Frieze London’s 2013 edition, which includes a two-year-old second branch of the fair across Regent’s Park for historical art called Frieze Masters, the amount spent on accommodation was £9,584,770 ($16,264,700). Other spending (shops and restaurants) was  £13,134,808 ($22,288,800) and auxiliary spending was £17,289,948 ($29,339,800).

Frieze Co-Director Amanda Sharp said that while the fair didn’t come to New York with specific goals with regard to its economic contribution, it was modeled with London in mind and “a hope that you could do something comparable. We are looking at an equivalent art center, with a rich museum culture and gallery system—a place where artists make work.”

One shorthand way to measure a decently attended art fair’s baseline impact, a seasoned art fair organizer told Gallerist, is to assume that 10,000 people are coming to the city from out of town and spending a minimum of $2,000 on hotels and restaurants. That adds up to a cool $20 million. (After all, this isn’t an office-machine convention—visitors to art fairs tend to include a decent number of ultra-high-net-worth individuals.) In early March 2013, on the eve of New York’s other art fair week, the one that has long included The Armory Show and The Art Show, Mayor Bloomberg said he expected the fairs to draw more than 66,000 attendees and generate more than $54 million in economic activity in New York City.

Back in 2007, the Armory Show retained the firm Audience Research & Analysis (ARA) to estimate the fair’s impact on New York City. They concluded that the fair generated an estimated $86.9 million in economic output, that direct spending by out-of-town visitors whose primary reason for being in New York was to attend the Armory Show was $33.8 million, and that visitor spending impact totaled $41.9 million. (Included in the total impact, the study noted, was $6.7 million in direct spending by the Armory Show, its sponsors, partners, exhibitors and exhibitors at other shows.)

Why all this study of the impact of art fairs? One reason has been the attention drawn by the raging success of Art Basel Miami. The transformative economic impact on the city of Miami of the annual Art Basel Miami Beach fair, and its surrounding activities (other fairs and parties) is generally put at $500 million. The success of the 12-year-old Miami fair has drawn cities around the world to the art fair concept. Chicago, for instance, already had a strong tradition of having a contemporary fair; the fair there in the 1980s and ’90s, which fizzled in the early 2000s, was the most important in the United States. Three years ago, when Tony Karman launched the international EXPO Chicago fair, he was already thinking in terms of what kind of effect it would have on Chicago, and has since created partnerships with the mayor’s office and the tourism office. “You can see where an art fair is doing several things,” he told Gallerist. “It’s not only creating an economic impact for the city in restaurants, hotels and other purchases, but it’s also having a huge economic impact on institutions because the fair is creating a week of activities all under one umbrella—museums, galleries, parties and events. So in Chicago you have local visitors, you have people coming in from out of town and from countries around world, then you have that general citywide engagement from an art fair done right.”

Then again, it’s not exactly simple to measure all of this. Last December, Miami-Dade county was reportedly frustrated in its attempt to conduct a study measuring the precise economic impact of art fair week in Miami. The county commissioners ran into roadblocks in their attempts to get precise revenue figures from private commercial art fairs, figures that would have rounded out their understanding of the fairs’ impact. “Just in the nonprofit art world it’s $1.1 billion a year that gets produced in Miami-Dade County,” Michael Spring, director of the county’s Department of Cultural Affairs, is quoted saying in an article in Miami Today. “I think you can conservatively double that number if you took into account all the commercial activity that goes in here as well. I would estimate more than $2 billion of economic activity attributable to the arts and cultural events.”

But as much as she is focused on her own fair’s economic impact, Ms. Sharp, the Frieze co-director, is looking just as hard at other indicators of success, ones that are perhaps less measurable. For Frieze, she said, it’s “not just about dollars into hotel rooms, it’s how you impact culture, how you bring audiences to art. Spectacle, enjoyment, joy. Those are measured using different metrics. We are still working out how to best benefit the nonprofits in this city, like giving them free space in the fair.” This year, several nonprofits, such as Artists Space and White Columns, are participating. “They can then meet people, and do something tangibly beneficial,” Ms. Sharp said. She is also looking at educational programs, such as a new one this year, that allows a group of New York high school students to follow an artwork’s progress from studio to display at Frieze.

Frieze New York is, like any other international art fair, part of an globe-spanning art ecosystem and market, but at the end of the day, Ms. Sharp said, there’s also an idealistic side to the enterprise that is essentially about spreading the word. “Culturally, there is a great war to be won of bringing contemporary art to more people,” she said. “The battle has just started on that one. We [at Frieze] are pretty evangelical about contemporary art. It brings enormous richness to our lives. So I think in terms of education and outreach there is a massive opportunity. What we need to be clever about is how we benefit the rest of the city economically.” 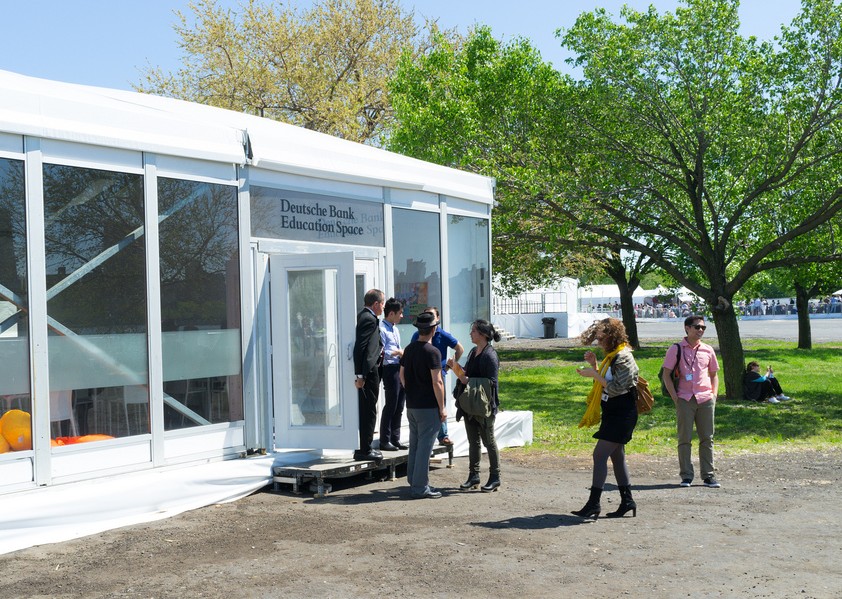