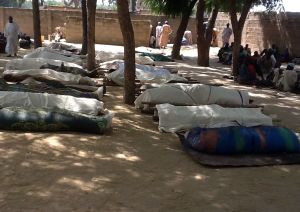 People stand next to dead bodies, which are laid out for burial, in the village of Konduga, in northeastern Nigeria, on February 12, 2014 after a gruesome attack by Boko Haram Islamists killed 39 people. “Up to 39 people have been killed and over 70 percent of the village has been razed to the ground,” Borno state Governor Kashim Shettima told reporters in the village of Konduga, blaming the February 11, 2014 late attack on the Islamist rebels.
AFP PHOTO/STRINGER (Photo credit should read STR/AFP/Getty Images)