PATERSON – This mayoral election has been unsettling – even agonizing – for Assemblyman Benjie Wimberly (D-35), Paterson, the man who might have run for mayor himself, who didn’t run and controversially backed another man for the job.

But amid a back boil of racial anger and street charges that he finds himself deflecting about loyalty and race-identity, on one level it’s getting easier for Wimberly now, he says – easier to fight for Council President Andre Sayegh, an Arab-American.

“You can be an albino transvestite from Yugoslavia and if you can get the job done, are competent, and can balance the budget, I will be with you,” said Wimberly.

Within a community that represents roughly 32% of the city, African-American leaders have pushed back against the assemblyman – who is black – protesting his affirmation of Democratic Party support for Sayegh.

With incumbent Mayor Jeff Jones up for re-election and yet perceived to be flailing politically in part because of his decision to support loser Steve Rothman in the 2012 Democratic Primary showdown with Paterson’s Bill Pascrell, in part owing to administrative misfires, Wimberly’s backing of Sayegh proved disappointing for those who want to coalesce around the incumbent.

Another candidate in the mayor’s race, speaking on condition of anonymity, said he listened, attentive to what he described as real political power – as a black leader stood up and reminded an audience at a forum that the African-American community does not have factories or businesses in Paterson.

“But we have City Hall – don’t lose it,” was the exhortation, a pitch on behalf of the mayor.

As the contest intensifies heading into Tuesday, Wimberly says he doesn’t regret his endorsement of Sayegh, made painfully under a hail of critics at City Hall, mostly campaign allies of former Mayor Jose “Joey” Torres.

“The day you serve only your own race is the day you become ineffective,” said Wimberly, head of the city’s recreation department, who teaches his players “to be colorblind,” as he sat in the dugout on Sunday coaching a little league baseball game.

Jones is a friend.

But the assemblyman assessed the mayor’s record, including Hurricane Irene overtime pay taken and – under political pressure – returned, and doesn’t get the sense that Jones wants the job as much as Sayegh.

The top vote-getter in the 2010 local Paterson election and often credited as giving Jones a lift to victory over Torres, Wimberly says he can work for a candidate, but only if the candidate is a worker.

Sayegh attended an event last night hosted by Wimberly and showed him a face of exhaustion.

“That face showed me a lot,” said the Democratic Assemblyman. “It shows me you’re giving it your all.”

Wimberly said the Democratic Party in his county has taken pains under the leadership of Chairman John Currie to celebrate diversity.  In fact, “Without John Currie as chairman you have no diversity, and that goes for Congressman Bill Pascrell, too,” said the lifelong coach turned lawmaker.

“It’s really unfortunate that race is a factor in this election, but my ethnic pride has not wavered at all,” he added. “I can’t judge the person by the color of their skin. If there are some people uncomfortable voting outside their race, hopefully this election makes a difference, and proves that Hispanics are not afraid to step out to support others, and the same with Blacks. I see the team behind Andre Sayegh; people like [Assemblywoman] Shavonda [Sumter], [School Board Commissioner] Many Martinez, and others and I see true cultural diversity.”

Wimberly says he feels angry when he hears the criticisms within his community of Currie, who last year supported the all-female gubernatorial ticket of state Sen. Barbara Buono and labor leader Milly Silva.

“I personally value being part of his team,” said Wimberly.

But Sayegh’s not the only one desperately trying to shore up African-American support from under the perceived politically ravaged Jones in a rundown with Torres.

The returning Torres – bucking the party this time and intent on appearing as more than simply the strongest Latino in the mayor’s contest – is also making forays into the Black community.

“We don’t want the county coming in here and telling us what to do,” the councilman told an energized crowd at a Torres rally this weekend in a slap at the Passaic County Democratic Party mobilized behind Sayegh.

In a charged atmosphere, insiders give credit to Torres for landing the endorsement of the longest-serving member of the governing body.

Torres also told the Bergen Record that he backs the re-election of 12-year incumbent African-American Councilman Ken Morris, Jr., who won’t endorse in the mayor’s race, but has known political ties to the former mayor and is a formidable candidate in pursuit of a fourth term in office.

Distrustful of Sayegh’s mayoral candidacy, Morris fears a takeover of the city council by the Democratic Party and an independence-crushing change-over from nonpartisan to partisan elections.

Almost reacting to McCoy’s endorsement of Torres, the Sayegh Campaign responded with the formal addition of another ally.

Running for re-election to his at-large seat, Councilman Ken McDaniel – arguably buoyed by a week’s worth of intensified discussions within the African American community by Currie, Wimberly and Sumter – on Friday backed Sayegh on the same week that McCoy threw in with Torres.

Running a campaign with no money and few endorsements, Jones still says he feels confident.

He sees the gritted teeth and public people praying for microphone squeal to leave obscured their announcements of support for a certain candidate, namely Sayegh, says the mayor.

“Chairman Currie told the establishment he brought them [Wimberly and Sumter] in, though they refused to endorse early on, and came out only after all the rabble rousing,” Jone said. “It’s questionable. I’m a fighting Democrat. I know when you’re committed to a cause. But these things have been serpentine at best.

“Last week the chairman had to come back out, it seems, and go back to the public and make it very clear, ‘We’re supporting Andre. We’re really, really supporting him,’ with people kicking and screaming at the twilight hour. The question is ‘why didn’t they come out early?’ It’s the same old thing of people trying to get cover now at the end. If the party puts you on the line, everything you say must be party; and now they’ve changed rules for a nonpartisan race and made it so everything you say must be party.”

Jones said he won’t let the party divide him from his brother Wimberly.

He still loves Wimberly, he said.

“But I’m looking at what friendship means and whether friendship in politics can exist,” the mayor said. “Dr. King said something once, about how prolific and profound were not the words of my enemies but the silence of my friends.”

But Wimberly too, separate from Jones, quoted King as his justification for politically parting company with Jones, and in Sayegh, a man he backed for school board commissioner a decade ago, he says he’s convinced he found someone hungry to be mayor and if not of the same color, of substantive character. 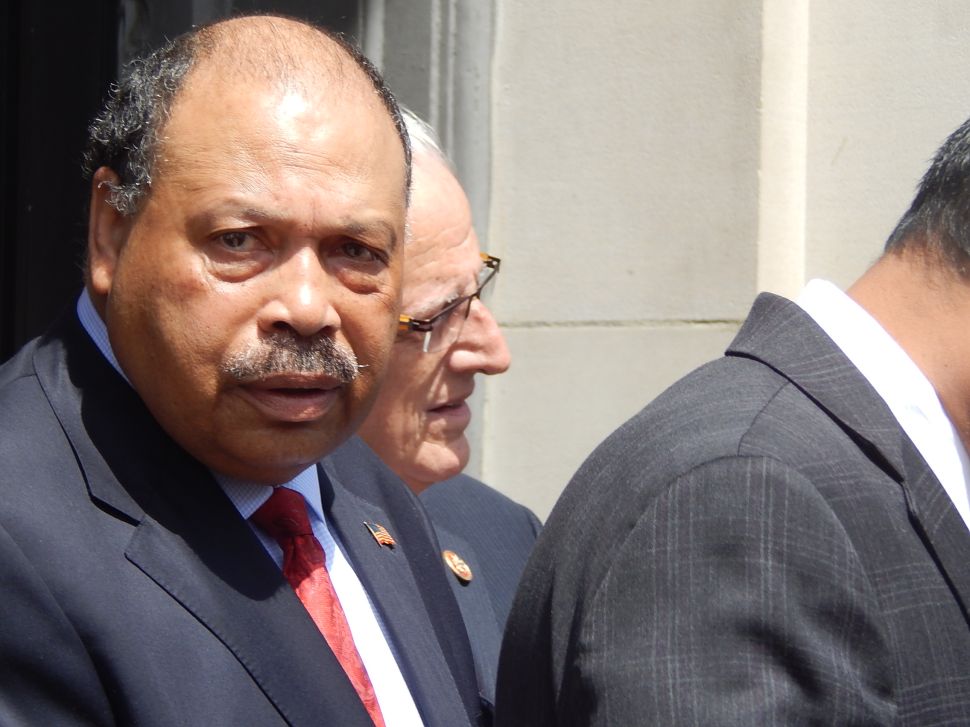