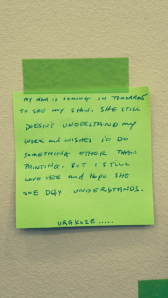 At Frieze, New York- and Paris-based Galerie Lelong has installed a participatory artwork by Yoko Ono that has already elicited some very personal reactions. For the artwork, My Mommy Is Beautiful (2004/2014), visitors are invited to jot a note to their mother on a Post-It note and tape the note to the wall. At the end of the fair, all of the notes will be given to Ms. Ono.

Lelong’s Mary Sabbatino explained that she asked Ms. Ono if she could show the piece with Sunday’s Mother’s Day holiday in mind. “Yoko has made many participatory artworks,” Ms. Sabbatino said. “This one results in something that is unique to each person.”

One of the notes, taped up amongst the “I love you”s and “I miss you”s in various languages, had particular resonance on Frieze’s opening day, recalling all the artists, including such masters as Manet and Cezanne, whose parents objected to their creative paths through life. The note, which also appears in the attached image, reads as follows:

My mom is coming in tomorrow to see my show. She still doesn’t understand my work and wishes I’d do something other than painting. But I still love her and hope she one day understands.

It is signed simply “Urakoze.”