Gohamist got a hold of an email from straphanger Andrew Lincoln, who was riding in the first car in the 7 train that filled with smoke and left passengers in a frenzy earlier today. Mr. Lincoln clarified the incident, detailing that passengers could see fire out the front window.

“The claims that fresh air was circulating, at least in that car, are bogus,” Mr. Lincoln claimed. He added that fans did not start within minutes as reported by the MTA, but only circulated air when the train was reversing to Grand Central.

“My main takeaway: the MTA has no way to deal with stuff like this, and there might not be a way to,” Mr. Lincoln noted.

According to Mr. Lincolns email, the atmosphere was mixed between people attempting to crack jokes and others praying to God. One passenger reportedly reassured everyone with “don’t worry everyone, my cousin died in 9/11!”

“You know how people block the doors trying to get on the train before you get off?” Mr. Lincoln chillingly reported, “People did that to this train, even though it came in the wrong way. There was no one to even tell them ‘Hey, these people have been deprived of air for 20 minutes, so give them a break.’… It was a reminder or warning that, yes, dying on the subway is possible.”

According to bewildered farers, the smoke signal was a loud popping noise right before the train entered a tunnel.

“There was a rushing noise,” one witness remembered. “Like an airplane was about to ascend, followed by a ball of orange.”

It was all smoke and mirrors when the power shut off, but fans started circulating air within minutes and the MTA reported that no one was endangered by the incident.

But passengers (understandably) found it hard to remain calm. “The car filled with smoke, people were crying, people tried to drop down to the floor, they covered their mouth with shirts, and throughout all this there was no public address system announcement about what was happening,” a commuter told CBS 2. Several others passed out.

The train, traveling between Times Square and Hunters Point Ave, stalled for 20 minutes on the tracks before reversing to Grand Central. After evacuating straphangers, the FDNY worked on scene, cutting off service between Queens and Manhattan for 90 minutes.

Great day to walk, no? 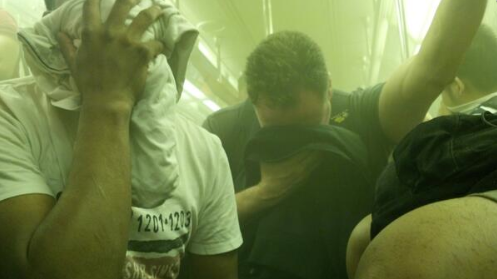