Metastasis is the Spanish language drama set in Colombia, based closely on AMC’s hit Breaking Bad. Vinnie Mancuso is a TV writer that doesn’t speak any Spanish. This is his attempt to recap Metastasis episode 1, El Laboratorio de Metanfetaminas.

Right off the bat, I can tell that Metastasis shares an affinity for tighty whities with Breaking Bad.

We are immediately treated to a shot of our main character, Walter Blanco (lol) wildly driving a school bus down a dirt road. And yes, he is only wearing a gas mask and some dirty underwear. Props to the casting department for choosing an actor with basically the same middle-aged dad body of Bryan Cranston.

For those wondering why a school bus instead of an RV, I’m guessing that in Colombia RV’s are pretty much only used to cook drugs in. Like if Walter tried to secretly cook meth in an RV in Colombia the cops would be all like, “Hey that’s an RV over there. There’s probably someone cooking meth in it.”

But I digress. Walter hops out of his not-RV, video camera in hand. Speaking in to the camera he, uh, well let me tell you he looks pretty upset about something. Not too sure what, but Walter is definitely distraught. Oh! I caught “Walter Jr.” That is a thing I know from the other thing. Okay, Walter’s definitely maybe pretty peeved about something and it may or may not involve Walter Jr.

Sirens can be heard in the background and Walter menacingly raises a gun. Because apparently he was also holding a gun.

After some opening credits we apparently jump back to a time where Walter Blano was not a gun-toting, underwear-showing badass. He is at home in bed with his wife. The words “Tres Semante antes…” flash across the screen. That’s probably important. Someone should Google that.

Walter has breakfast with his wife and Walter Jr., because apparently even in the Spanish remake Walter Jr. loves himself some breakfast. Mrs. Blanco says “feliz cumpleaños” to Walter at one point, which what I’ve learned from having friends that took Spanish in high school means it is Walter’s birthday.  I’m nailing this.

Walter then proceeds to have a really shitty birthday. We see him fist at his day job as a teacher. Based solely on the fact that he can change the color of fire with a spray bottle I’m going to say chemistry. A student whose name I didn’t catch, let’s call him Unruly Teenager #1, generally just acts like a dick.

Later, at his second job at a car wash. Walter gets in to a fight with someone who may or may not be his boss and most definitely looks a little like Mickey Rooney. As punishment Walter has to clean some tires and would you look at that the tires belong to Unruly Teenager #1. Unruly Teenager #1 again generally acts like a dick about the whole situation.

Walter comes home to a surprise birthday party. This poor bastard can’t even enjoy this because Spanish Uncle Hank (who disappointingly is only half bald instead of full-Dean Norris-bald) is being all macho and pulling out his gun and stuff. Based primarily on body language and the level of awkwardness, Walter feels emasculated.

Now this is where shit gets real on Metastasis (I think). Walter collapses at his job and is forced to go to the doctor. There is a long talk between Walter and the doctor but, and I don’t know if you’ve picked up on this, I don’t speak much Spanish. What I do know is that Walter makes a whole ton of faces that are all like, “Ooh, that’s pretty bad news.” The doctor makes a lot of “I know, bro, you’re totally sick” faces. So I guess you could say Walter’s pretty sick. The scene ends with Walter pointing out that the doctor has a stain on his jacket. No amount of faces could tell me why that happened.

Later at home Walter either doesn’t tell his wife that he is sick or she just really doesn’t care that much when he does.

Luckily for Walter, one of the side effects of his new sickness is growing a pair of man balls. There is a scene where he beats the shit out of some kid for making fun of Walter Jr and another one where he flips out on Mickey Rooney Car Wash Boss. Finally, he goes on a ride-along with Spanish Uncle Hank, which ends with him at a drug bust. It is there we finally meet Spanish Jesse, who falls out of a window in front of Walter much like the American version. (Note: The character’s name is not Jesse on the show, but for the life of me I don’t know what it is).

Walter follows Spanish Jesse home and honestly, for a little while here, it is mostly just Walter and Spanish Jesse talking intensely for a few scenes. Spanish Jesse speaks really fast and points a whole ton. Walter looks sheepish a lot but also steals some chemistry equipment from his school. Somewhere along the line Walter convinces Spanish Jesse that it is a good idea to start making some drugs. Spanish Jesse shows Walter the run-down school bus from the opening. Walter looks hesitant either because he is having second thoughts or he doesn’t like the drapes. I couldn’t tell.

There was a drug-makin’ montage but honestly I got pretty distracted because the montage song was in English and I latched on to things I could understand. Either way. at the end of it Walter and Spanish Jesse have a sweet batch o’ drugs. Spanish Jesse is pretty proud of it and whoa jump cut we find ourselves in a pretty intense dog fighting ring. Like, there was pitbulls with spiky masks on their faces and stuff. It was quite jarring.

Back at the school bus Walter (in tighty whities, of course) waits for Spanish Jesse, who shows up with Dog Fight Thug and friend of Dog Fight Thug in tow. Some pretty ominous music played so I gathered that was not the plan. Turns out I was right. Dog Fight Thug takes Walter in to the bus and either demands he make a batch of drugs or breakfast at gunpoint.

So after an hour of confusion, I’ve learned one thing. A guy in a bad wig and his underwear standing on the side of the road next to a crashed bus is a pretty normal sight in Colombia. 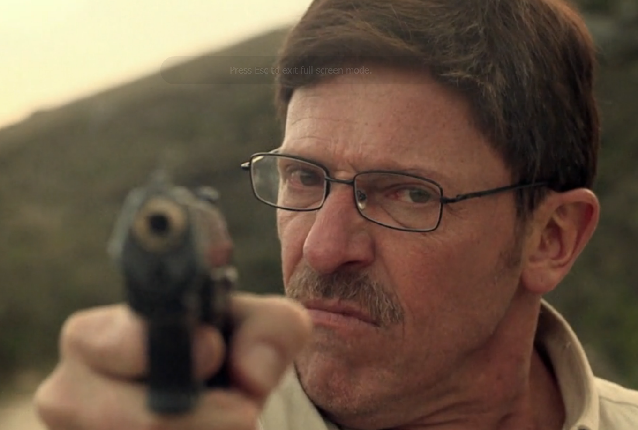