As Ninth Circuit Chief Judge Alex Kozinski has written, prosecutorial misconduct has become “an epidemic.” And evidence has come to light that our president, the nation’s chief law enforcement official, seeks his counsel from the worst.

If ever a picture was worth a thousand words, it is a recently released White House photo of President Obama and his muses—if one only knew the truth behind those muses whispering in the President’s ear as they strategized in the aftermath of the Benghazi tragedy. To understand the (politely-put) “lack of transparency” from the White House, the enormous politicization of the Department of Justice, the release of Taliban leaders from Guantanamo, refusal to cooperate with congressional investigations, the IRS’s harassment of political opponents, and the cover-up of Benghazi, read on.

President Obama’s right-hand woman Kathryn Ruemmler, conveniently seated to his right, was his longest serving White House Counsel and remains one of his closest and most trusted advisors. When Mr. Obama selected Ms. Ruemmler to advise him on the most important legal matters, including the selection of federal judges, responses—actually oppositions—to congressional investigations, assertions of executive privilege and expansive executive orders, Mr. Obama said she “was an outstanding lawyer with impeccable judgment.” The press reported that Jamie Gorelick said Ms. Ruemmler knew “the traditions and values of the administration.”

Upon her recent departure, the President said he “deeply valued her smarts, her wit, her impeccable judgment — but most importantly her uncanny ability to see around the corners that nobody else in the room anticipates.” More aptly put, she had an uncanny and nefarious ability to circumvent the rule of law by cutting those aforementioned corners.

Ms. Ruemmler returned as a Partner to the prominent international law firm Latham & Watkins, where she has sheltered intermittently between stints in the Department and the White House.

If you were feeling some sense of relief that Ms. Ruemmler is no longer in the White House, let that be fleeting. Obama also said that he “will continue to seek her counsel, and most of all, I am proud to call her a close friend.”

Disturbingly, evidence has surfaced that the President Obama’s close friend and senior advisor violated her oath “to protect and defend the Constitution of the United States,” the rules of legal ethics, not to mention the law. As a senior member of the Enron Task Force, Ms. Ruemmler prosecuted four Merrill Lynch executives and sent them to prison on an indictment that was “fatally flawed.” The conduct the prosecutors alleged was not criminal. At the same time, she deliberately hid exculpatory evidence—that is, evidence she was constitutionally compelled to hand over to the defense. Indeed, the prosecutors not only acknowledge the evidence as exculpatory, they yellow-highlighted it as such—then buried it.

Not only did Ms. Ruemmler hide the evidence she had identified as crucial to the defense, but she signed the false and misleading “disclosure letter” to defense counsel. Ms. Ruemmler then elicited hearsay testimony from witnesses that was directly contradicted by the first-hand evidence she and her Task Force hid. She capitalized on and compounded the injustice, repeatedly telling the court and jury “facts” that were directly refuted by the evidence she hid.

The Fifth Circuit Court of Appeals ultimately reversed 12 out of 14 counts of conviction against the executives, acquitting one entirely. All the defendants were released, after having spent up to a year in prison on a sham indictment, while Ms. Ruemmler and her cronies continued both to hide the evidence that defeated the government’s case and to demand that the Merrill executives be prosecuted a second time on the same indictment.

Mr. Obama’s second muse, directly to his left in the photo, is Lisa Monaco—probably just a coincidence that she’s a close, longtime friend of Ms. Ruemmler—who also served on the elite Enron Task Force. Ms. Monaco was implicated in the prosecutorial misconduct that infected the Enron Broadband case prosecution. Houston Judge Vanessa Gilmore was irate with the prosecutors. They elicited false testimony from a government witness, threatened witnesses for the defense with indictment if they testified, and used evidence already ruled inadmissible. The Broadband jury wised up. It hung on some counts and acquitted the defendants on others. Of course, the prosecutors demanded a second trial. Drunk on unlimited taxpayer resources, they continued fighting to keep the evidence hidden and protect the ascension of the cabal.

Obama chose Ms. Monaco to be his Counter-Terrorism advisor. Was that because of Ms. Monaco’s experience with the “terror of a prosecutor” Leslie Caldwell, also from the Enron Task Force, who now heads the Criminal Division of the Department of Justice? Ms. Caldwell spearheaded the destruction of Arthur Andersen LLP and its 85,000 jobs only to be reversed 9-0 by the Supreme Court because of the flawed indictment and the absence of criminal intent.

Or was Ms. Monaco chosen because of her illustrious rise in the Department of Justice following her Task Force stint? And there was also her close connection with the FBI, where she had served as Director Mueller’s chief of staff, apparently while Enron Task Force Director Andrew Weissmann (who helped Caldwell destroy Andersen) also served as special counsel to Mr. Mueller. Mr. Weissmann later became General Counsel for the FBI in 2011 while Ms. Monaco was heading the Department’s national security division.

It leaves one to wonder why the former Enron Task Force cabal dominates the president’s inner circle? All of their trials were tainted with Supreme Court and appellate reversals, outrageous abuses of government power, a plethora of prosecutorial misconduct, and even guilty pleas had to be withdrawn because of their over-reaching.

The picture is rounded out, shall we say, by the presence of yet another Obama muse: Susan Rice. She was not on the Enron Task Force, but is, as George F. Will politely described it in the Washington Post, “accident-prone.” Individually or combined, their disregard for truth, for individual rights and liberties, their willingness to hide evidence and intimidate witnesses, and their contempt of Congress and for the Rule of Law, is staggering. Bowe Bergdahl, the Taliban leader-release, and the Benghazi cover-up are but a mere sampling of the corruption. Perhaps the President would “rather laugh with the sinners than cry with saints,” perhaps his muses are much more fun, but where does that leave the rest of us?

Attorney General Robert H. Jackson once said, “The prosecutor has more control over life, liberty, and reputation than any other person in America. His discretion is tremendous. . . .While the prosecutor at his best is one of the most beneficent forces in our society, when he acts from malice or other base motives, he is one of the worst.” A prosecutor has almost unilateral, unchecked ability to destroy the lives of those he charges. It is beyond troubling that our top law enforcement officer chooses the company of those who repeatedly failed their duty. 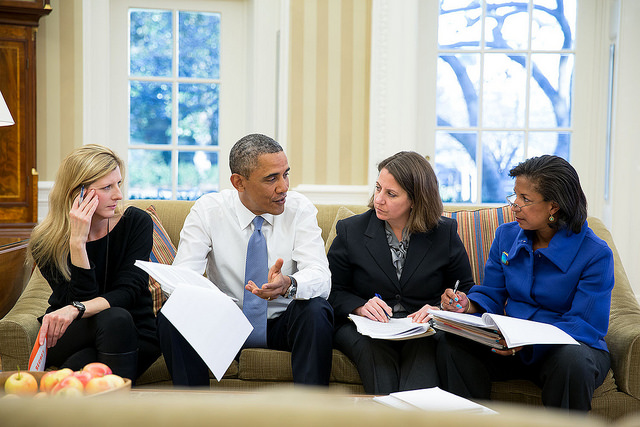