WebMD announced they’d be beefing up patient-doctor interactivity, but there’s one thing they forgot.

First Derm lets users send in pictures of their infected business to a doctor for a painless diagnosis.

The whole process is quick and anonymous — perfect for people who don’t have the time or desire to find a real-life testing center.

All you have to do is submit two photos of your junk (a close-up and an overview) and you’ll get a result from a dermatologist within 24 hours.

The diagnosis costs $40, but cutting out the awkwardness of a doctor’s visit is most likely worth it. Additionally, 70 percent of the cases can be treated with over-the-counter medications, so chances are you won’t have to step foot in a doctor’s office at all, according to their site.

Despite the fact that the app has expanded to detect other skin ailments, 70 percent of the photos First Derm receives are “below the waist,” according to Techcrunch.

That’s saying something considering you can get a diagnosis for more than 90 different skin conditions.

With that in mind, you might want to download First Derm if you’ve been Tindering a lot, studies show. 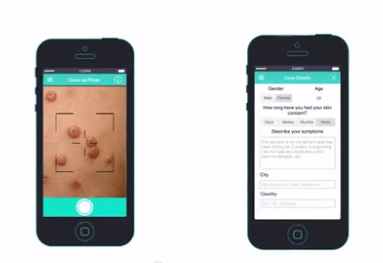