TRENTON – In the face of Democratic proposals seeking to solve the state budget impasse that include a potential millionaires’ tax, state Assembly Minority Leader Jon Bramnick (R-21) targeted the operative three-letter word, then unloaded with an anti-tax tirade.

“No more taxes. Not now. Not $1.6 billion,” said Bramnick during a Monday morning press conference at the State House, backed by 22 other GOP state legislators and referring to recent budget proposals made by State Senate President Steve Sweeney (D-3) and state Assembly Majority Leader Vincent Prieto (D-32). “[The Democrats] are raising the price of living in New Jersey, and are playing to a specific constituency, not to the average taxpayer.”

Sweeney’s original proposal to close the budget gap would raise $1.6 billion, an amount equal to the next pension payment promised by lawmakers’ original pension reform plan signed in 2011, over the next fiscal year by imposing a 10.25 percent tax rate on income over $500,000, and a 10.75 percent tax rate on income over $1 million. Comparatively, the state’s top tax rate is currently 8.97 percent, levied on income above $500,000.

Prieto, however, reportedly expressed his displeasure with Sweeney’s proposal during back-room budget discussions last week. Sources told PolitickerNJ.com that Prieto is instead promoting a true $1 million-and-more salary threshold for the proposed millionaires’ tax.

PolitickerNJ first reported on an agreement between the two leaders here.

Governor Chris Christie’s plan calls for cutting $2.4 billion in pension contributions to public employees between now and 2015 to make up for an estimated $800 million revenue shortfall.

Emphasizing that Governor Christie has shown zero indication that he will even consider raising new taxes, Bramnick reiterated a familiar Republican mantra about the efficacy of taxes.

“One point six billion dollars in new taxes is simply a bad idea, especially if you combine $1.6 billion in taxes with hundreds of tax increases over a decade that the Democrats have delivered to the state of New Jersey,” Bramnick said. “Where are we going when Senator Sweeney and Speaker Prieto have ended reforms in the state of New Jersey? If you recall, just a short while ago we were all on the same page, making New Jersey more affordable [with] less taxes and no new taxes. What’s changed?”

Bramnick then took an indirect shot at both Sweeney and at one of Prieto’s main political allies, Jersey City Mayor Steve Fulop.

“What’s changed is a fight within the Democratic ranks for a primary bid in the gubernatorial election a couple of years from now,” referring to an anticipated fight between North Jersey’s Fulop and South Jersey’s Sweeney to be the Democratic standard bearer in the next governor’s race. “So now what the Democrats have done is basically gone back to their old tools, which is raising taxes. This is the worst policy that you could put forward.”

“The Republicans made clear today why they continue to be the minority party – they’re bereft of ideas, favor the wealthy over the middle-class and offer nothing more than knee-jerk criticisms instead of honest discussion,” countered Tom Hester, spokesman for the Assembly Majority office. “Democrats are offering a fiscally responsible plan that meets the needs of New Jersey’s working class and fulfills our obligations, while the Republicans continue to support Gov. Christie’s failed fiscal policies that have led to painful property tax hikes, credit downgrades and massive deficits. Middle-class New Jerseyans are smart enough to know the Republicans offer no real solutions.” 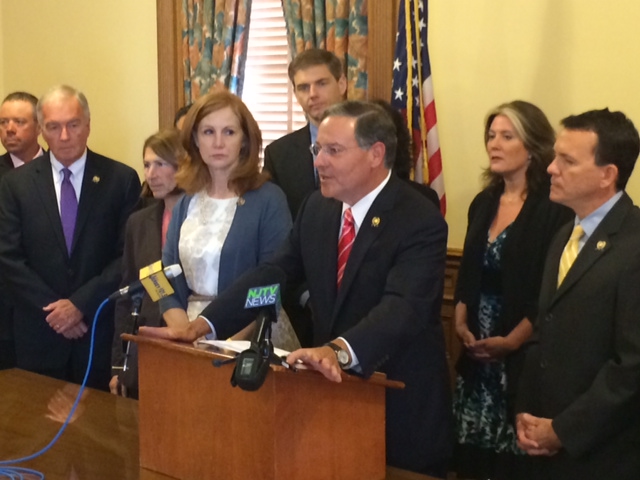