Drew Nieporent is a big man who fits into small spaces. Since 1985, the agile 60-year-old restaurateur has been the lessee of a diminutive storefront on West Broadway in Lower Manhattan, formerly known, under chef David Bouley, as Montrachet. Montrachet did well but closed in 2006. In 2008, the space reopened, reconfiguring to the whims of its new chef, enfant terrible Paul Liebrandt, with a geographical shift in name and cuisine to Corton, 23 kilometers northeast. Last year Corton closed too and Nieporent did that jingle jangle entrepreneur dance—not quite the Wobble or the Dutty Wine—to reinvent his space yet again. The result is Bâtard, his new Austro-French restaurant co-helmed by John Winterman, the silver fox formerly of Daniel, on the one-two liquor tip and Markus Glocker, formerly the executive chef at The London, in the kitchen.

Nieporent says “bâtard” refers to the region of Bâtard-Montrachet, not its English analogue, but who is he kidding? That would be like naming a restaurant “Mother Fokker” and saying it was christened after the mom of the Flying Dutchman. No, Bâtard means bastard, with all the charm and troublemaking the word implies.

Happily, Bâtard belongs to a line of illustrious bastards and iglets, taking the word literally as a child born out of wedlock, but often born of love. The intersection of a petunia’s worth of Venn diagrams, the 60-seat space dances somewhere between the restaurant’s well-known fine dining past and a more casual future, and more broadly between the history of New York restaurants and what’s to come. In other words, it feels very “now.”

Corton’s old hand-plastered wall, adorned with birdies and twigs, is still there, but its confusing gray carpeting, which undercut the restaurant’s extravagance with semiotic markers of a Motel 6, is gone, replaced by more fitting hardwood. Gone too are the tablecloths, and with them stuffy notions of fine dining. The clientele is mixed, composed one night of Bill Clinton and Robin Wright look-alikes, and on another of what appeared to be the young patrons of a Whitney event. Of course, it isn’t a bistro—the menu is still prix fixe, the technique still soigné. Dinner comes with a two- ($55), three- ($65) and four-course ($75) option. Go with the most inclusive. It’s the best deal at any restaurant that matters.

In a score of succinct but potent dishes, Glocker brings his formidable European training to bear on American ingredients, from rabbit “bouillabaisse” to the local lovage, infused in the white veal stock he uses to make a “Germanic potato salad,” which Anshlusses across the tongue like a starch Valkyrie.

Glocker grew up in a hotel family—his uncle ran the Klockerhaus, a Nationalparkhotel in Krimml—and worked under chefs such as Charlie Trotter and Eckart Witzigmann, not to mention the king of shoutiness, Gordon Ramsay. His Austrian home and German career have left him with an austere, serious sensibility. One of the most intriguing appetizers are Stella Bay oysters paired with fried pig’s tail and pickles. The pleasure isn’t in the preparations—though warm oysters have never been (so) pleasing, nor pig tail so coquettishly croquetish—as much as the unexpected juxtaposition. It’s a strange tapas, textural derring-do. In another success, the octopus “pastrami,” he nods to New York with pastrami spice, yet prepares his cephalopod terrine with ascetic simplicity. This Glocker serves with bits of braised ham hock, creating porky pleasing shmutz on the ocean floor.

Much of Glocker’s best work is tinged with illegitimacy. That rabbit “bouillabaisse,” inspired by a recipe by Witzigmann, plunges Thumper into a fish stew. Tender bits of rabbit tenderloin—including a tragic frenched medallion—arrive with a saffron raviolo like a punchy yellow purse and bits of turnips and carrots, presumably to feed the rabbit on his trip to the great beyond. Because the rabbit is so mild, the saffron so intriguing and Glocker’s skill so persuasive, the dish feels both thrillingly new and inevitable. A little later, and grander, that unimpeachable technique is reprised in a Lamb for Two, one of the most delicious of Bâtard’s offerings. However, the restaurant’s highest achievement—the assumption of chicken schnitzel into some Godhead material—isn’t even listed on the menu. Oh, you sneaky bâtard.

Even before Nieporent stepped in to father Bâtard, Winterman and Glocker were in cahoots. And Glocker says his menu is largely inspired by how his food fits with wine. But Winterman has also created a cocktail called Ol’ Dirty Bâtard, made with Jim Beam rye, punt e mes, cocchi rosa and mole bitters, which rendered me insensate to the charms of a Chardonnay. And even without the pairings, Glocker’s cuisine shines.

But the menu isn’t without missteps, which generally occur when Glocker seems to be playing it safe, such as with marinated artichoke, a pretty if vapid parabola of pleasant vegetables and veal medallions, which should be a victory lap, but feel instead like a relic from Glocker’s hotel days. One wishes he were a bit more bastardly there.

Nevertheless, transgressions are quickly forgotten with the arrival of caramelized milk bread, a dessert inspired by an Austrian Christmas treat, which has a consistency somewhere between brioche and angel food cake. Glocker adds some strawberries—this being strawberry fields forever season—and brown butter ice cream. Every bite is a month’s membership at the gym and an affront to your dental hygienist, but it doesn’t matter. This is one bâtard you can’t help but love. 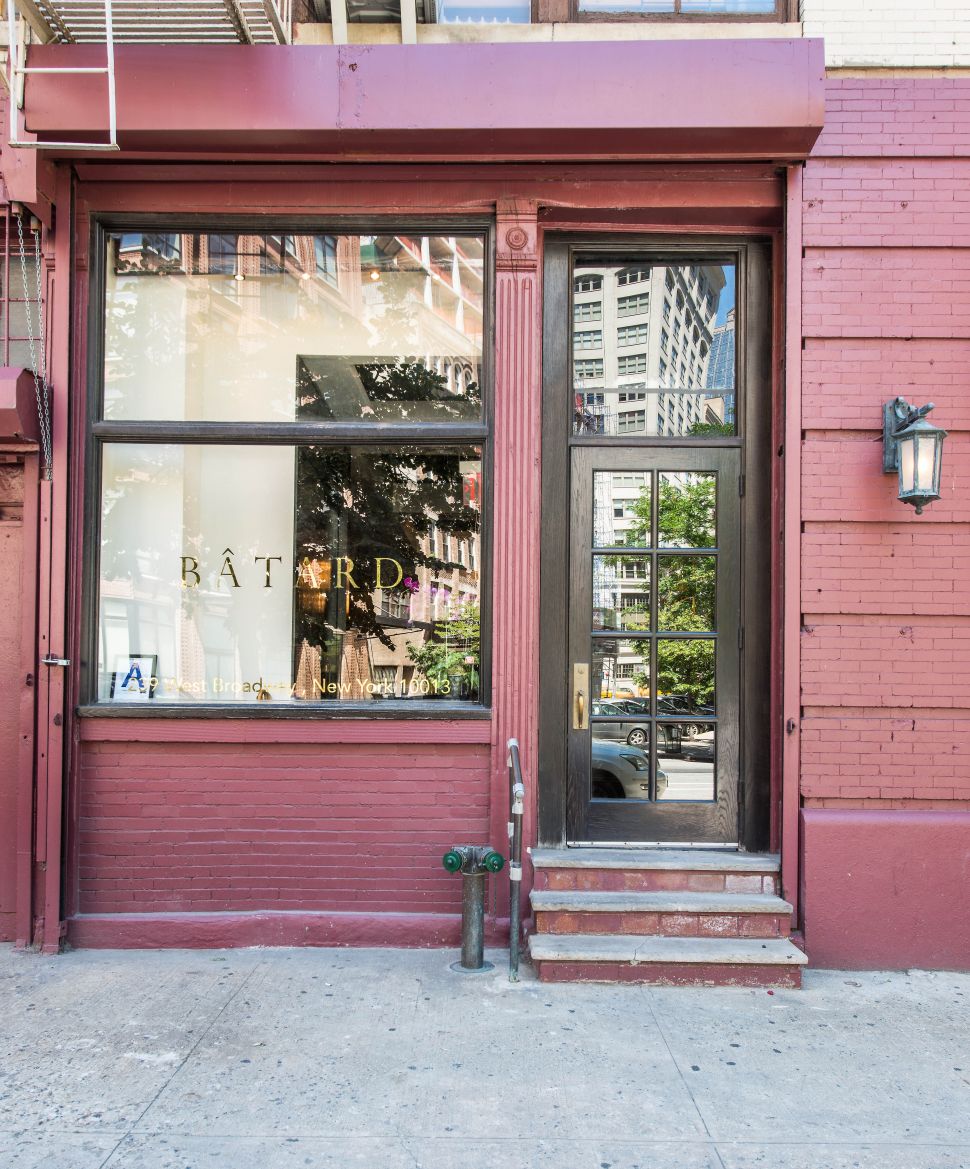