BAYONNE – With the fight to control Bayonne coming down the wire, some observers might say that Bayonne-based state Assemblyman Jason O’Donnell (D-31) is precariously positioned on a political high wire.

In his role as campaign manager for incumbent Bayonne Mayor Mark Smith, O’Donnell is one of the chief field generals tasked with holding back the rebel forces of insurgent candidate Jimmy Davis in the June 10 mayoral runoff election. Davis, a Bayonne police captain, came within two percentage points of taking out Smith during the May 13 municipal election. Now, with the runoff election less than 24 hours away, O’Donnell is engaged in what could be the fight of his political life to save his ally Smith from defeat.

Sources have told PolitickerNJ.com that O’Donnell’s political future could also be jeopardy. Tomorrow’s Bayonne mayoral runoff could be the start of political instant karma that will get O’Donnell payback for the blazes the Bayonne firefighter and public safety director has figuratively fought at the State House.

An assemblyman since 2010, O’Donnell was among 13 Assembly members that supported state Assemblyman Joe Cryan’s (D-20) failed coup d’etat against then-Assembly Speaker Sheila Oliver (D-34) in 2011. Cryan, the Assembly majority leader at the time, and the other rebels were angered by Oliver’s move to hold a vote on legislation that requires public employees to bear more of the cost of their pension and health care benefits.

With the battle drums sounding their dread tattoo as the fog of political war descends on Bayonne tomorrow, some political observers believe that the Bayonne mayoral runoff could be the death knell for O’Donnell, the Bayonne Democratic municipal chairman, and Smith, his main ally.

“O’Donnell and Smith played in the deep end of the pool and didn’t wear their swimmies,” one statewide Democratic source told PolitickerNJ.com on the condition of anonymity. “They made a lot of enemies that they didn’t have to make. If Smith wins, O’Donnell might still survive somehow. If Smith doesn’t win, O’Donnell is done.”

But in an interview with PolitickerNJ.com on the eve of the election, the song O’Donnell sang was not a funeral dirge, but a battle hymn.

“I can’t speak to anybody’s motivations. I chalk it up to politics. Why wouldn’t they want to take a shot?” O’Donnell, 43, said on Sunday night behind Smith’s campaign headquarters on Broadway. “[If Smith loses] I’d be worried for the town. Me? Listen – I lost my father, who was my best friend, when I was 23. That changed my perspective on life. I had a child who was born and was told that he had a ten percent chance to live, not seven years ago. That changed my perspective on life. At the end of the day, my dream job was second base for the Yankees. This is just as good, because I get to serve the people of the city of Bayonne. If I don’t, I’ll serve them in another way. Meanwhile, we’re on the edge of a knife, and success is not guaranteed. We have to work very hard for it, and continue the things that we’ve been doing.”

Minutes later, O’Donnell addressed a group of Smith volunteers before heading out into the Hudson County night for another Bayonne battle briefing.

“The other guys are going to throw everything at you on Tuesday – the kitchen sink, kitchen knives and all the mud that they’ve got,” O’Donnell said, sleeves rolled up. “And what are we going to do about they mess they make? We’re going to clean it up.” 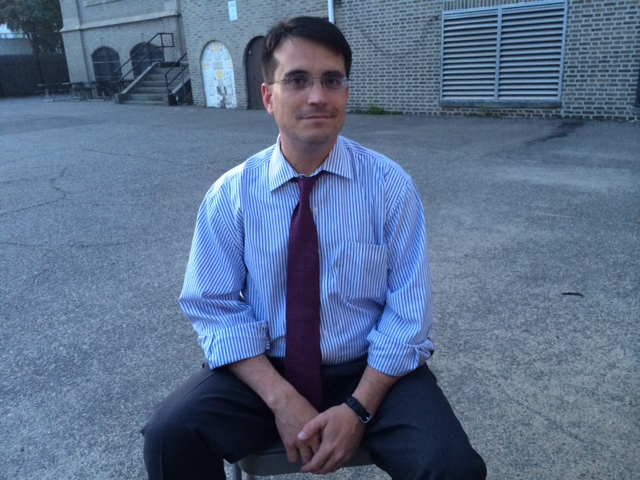