“Mark Smith is a friend, and I believe in him,” Codey told PolitickerNJ.com, referring to what many political observers believe could be a closely-contested runoff race on Tuesday after Smith edged Davis, a Bayonne police captain, by two percentage points in the May 13 Bayonne municipal election. “I don’t bet on friends. I support him.”

Codey explained that his backing of Smith was based in part on his belief that Smith would better serve the approximately 60,000 people of Hudson County’s Peninsula City.

“Bayonne has changed for the better. For Christ’s sake, every developer in the world now wants to come into Bayonne. It’s the next Hoboken,” Codey said. “Mark Smith understands that. He gets it.”

Smith paused from shaking hands with commuters and handing out palm cards at the 8th Street light rail station with Codey to address the contents of a New York Times article published yesterday that indicates the Port Authority of New York and New Jersey’s 2010 purchase of a 131-acre tract of land on the Bayonne city waterfront for $235 million was a benefit, not a bust, for Bayonne. This view is opposed to contrary statements made by Davis about the purchase, made up of part of the site of a former military installation known as the Marine Ocean Terminal at Bayonne, or M.O.T.B.Y.

“My opponent this whole election is saying that we gave [the tract] away to the Port Authority, that it was a bad deal,” Smith told PolitickerNJ.com. “I wish the article had come out a month ago. It bears out everything that we said then. It was a great deal for the city of Bayonne. Meanwhile, my opponent has no plan. He has no vision for Bayonne’s future. I do.” 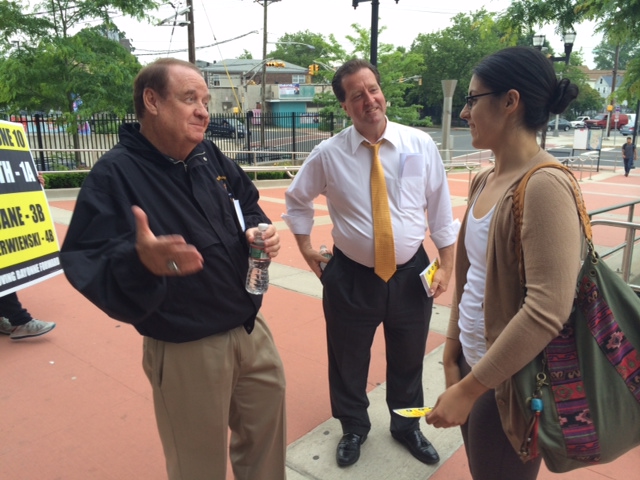