So, on the precipice of political battle, Davis addressed a packed back room of more than 100 supporters at the Victoria Tavern in the Bergen Point neighborhood of Bayonne. He spoke from the heart, as sharp as a rough-cut diamond, embedded deep in the rough and tumble world of Bayonne politics.

“I promise you that this is my last speech before we take City Hall,” Davis proclaimed to the roaring crowd on Monday night. “Without you, myself and my team would not be here. And now it’s time to finish the deal, seal it, and send their fate packing.”

Fate has led Davis and Smith into political hand-to-hand combat on Tuesday, separated after the May 13 Bayonne municipal election by only two percentage points. Earlier on Monday, Smith spoke out in praise of a New York Times article first published on Sunday that indicates the Port Authority of New York and New Jersey’s 2010 purchase of a 131-acre tract of land on the Bayonne city waterfront for $235 million was a bonus, not a bust, for Bayonne. This view is opposed to contrary statements made by Davis about the purchase, made up of part of the site of a former military installation known as the Marine Ocean Terminal at Bayonne, or M.O.T.B.Y.

But in the Bergen Point bar where his last Bayonne mayoral race rally was held, Davis held firm to his belief that the deal the city made with the Port Authority was bad for Bayonne.

“All this deal was, and it proves what I was saying all along, is that it was a backroom deal in favor of the Port Authority,” Davis told PolitickerNJ.com. “It was something that was done behind the citizens’ backs without them knowing. Nothing was brought to the people.”

In his campaign’s final moments, Davis brought his case before the people of Bayonne with one last unrehearsed verbal grenade lobbed at the Smith administration.

“Everybody has to get out and vote. It’s time for a change. It’s time to take back our city,” Davis said. “Send the bully and his puppets home.” 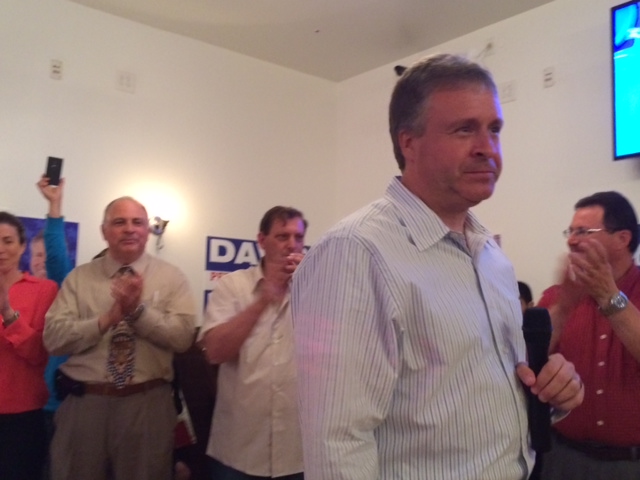