Mayor Bill de Blasio and the City Council agreed tonight on a $75 billion budget for the coming fiscal year, avoiding much of the acrimony that has plagued budget battles of the recent past.

Mr. de Blasio and Council Speaker Melissa Mark-Viverito, along with many council members, gathered in the City Hall rotunda to announce the deal. The exuberant pols repeatedly cheered each other on, celebrating the small increase in police officers on city streets, the introduction of a free lunch program for middle school students and new security funding for the city’s Housing Authority. The budget increased slightly from the previous year.

“The budget is a statement of values, the budget affects people’s lives at the grassroots,” Mr. de Blasio said. “We are very,very proud of this budget that will have an extraordinary impact on all 8.4 million New Yorkers. It signals a new direction for New York City.”

Many of the council’s lofty budget aims–adding a thousand cops to the police force and instituting free lunch for every public school student–were pared down in the final budget. Mr. de Blasio said only 200 police officers would be moved from desk jobs to street patrols, though Ms. Mark-Viverito still called the budget an “incredible victory.”

“This is an incredible victory and we should all be proud,” she said, noting the officers were doing clerical work before and now would be out on patrol.

The budget provides about $6 million for free school lunch to all middle school students starting in September. Mr. de Blasio and the council framed the allocation as a pilot program that could, in theory, be expanded further.

Mr. de Blasio, despite his repeated vows to end the member item system, also confirmed that council members would have discretionary funding that they can dole out to favored groups in the new budget. He said he and Ms. Mark-Viverito had reached a “détente” and that he was satisfied with how the council had worked to reform the process.

While many of the council members cheered on the mayor, the speaker and even staff–“finance staff” was one of the many chants heard tonight–comity could not be found everywhere. Two out of the three lone Republicans on the City Council, both from Staten Island, immediately blasted out a statement decrying the lack of new officers.

Neither Republican was in attendance tonight.

“We appreciate Speaker Mark-Viverito’s leadership and our Council colleagues for joining the fight for new police hires. However, we are extremely troubled by this administration’s unwillingness to compromise on this crucial public safety issue,” said Councilman Vincent Ignizio, the minority leader, and Councilman Steven Matteo.

“The alarming rise in shootings and the spike in crime in public housing and in our borough are evidence that an infusion of new officers is sorely needed,” they added. 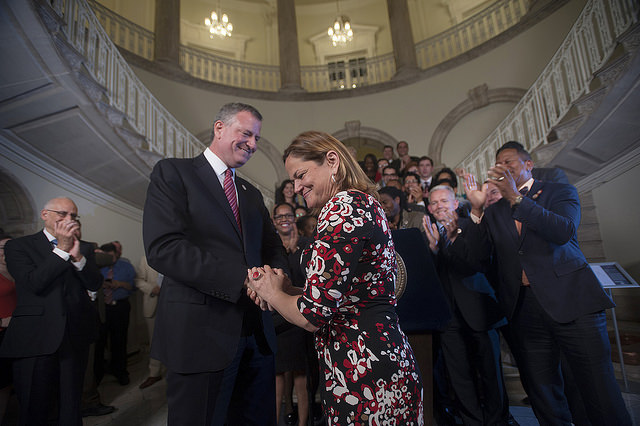