The city has reached a tentative agreement with the members of 1199 SEIU United Healthcare Workers East and New York State Nurses Association employed by the city – akin to the deal the city brokered with the teachers’ union, Mayor Bill de Blasio announced Wednesday.

The contracts – which cover nine years, including retroactive pay – weigh in at a gross cost of $879.3 million, though it will be offset by money in the city’s stabilization fund and through the healthcare savings required of the teachers union and approved by the Municipal Labor Council. The price is within the pattern set by the UFT deal, so it won’t require any additional expenditures beyond what the city has already budgeted for labor contract settlements, according to the mayor’s office.

It’s the first tentative agreement since the deal with the United Federation of Teachers, which struck a contract Mr. de Blasio promised would set a pattern for the rest of the city’s workers.

“Today marks another step toward restoring a productive, respectful relationship between the City and its workforce, while securing much-needed certainty that protects our long-term fiscal health,” Mr. de Blasio said in a statement. “These tentative agreements with 1199SEIU and NYSNA are consistent with the pattern we established earlier this year, including the unprecedented and guaranteed health care savings.”

While 1199 is a massive union — and one that’s having a good week after picking the winner of the 13th district primary, Congressman Charlie Rangel — this deal applies only to 1199 healthcare workers employed by the city, some 2,500 employees. It covers more than 8,000 nurses working for the city through NYSNA. Most of the employees from both hospitals work in city Health and Hospitals Corporation facilities.

The employees will also receive raises of approximately 2 percent annually for 2015 through 2018. Like the teachers’ deal, its unclear what, exactly, the healthcare savings required in the deal will be.

“The healthcare workers of 1199SEIU are thrilled that we have reached this landmark agreement that ensures we can provide quality care for New Yorkers,” 1199 president George Gresham said in a statement.

“Mayor de Blasio’s administration has ushered in a new era, in which the city’s workforce is listened to and treated with respect,” he said. “This approach to negotiations sets the tone for our entire city, helps to address the destructive inequality gap, and signals that New York is for everyone, not just the wealthy few.”

“This new agreement reflects what we can achieve when we work together with a progressive Mayor to make positive changes in the lives of city nurses and our patients,” she said in a statement. “For too long, city nurses struggled for a fair contract. Finally, we can put that struggle behind us. We are committed to working together to ensure that New York City’s public hospitals continue to be the best places to work and to receive care.” 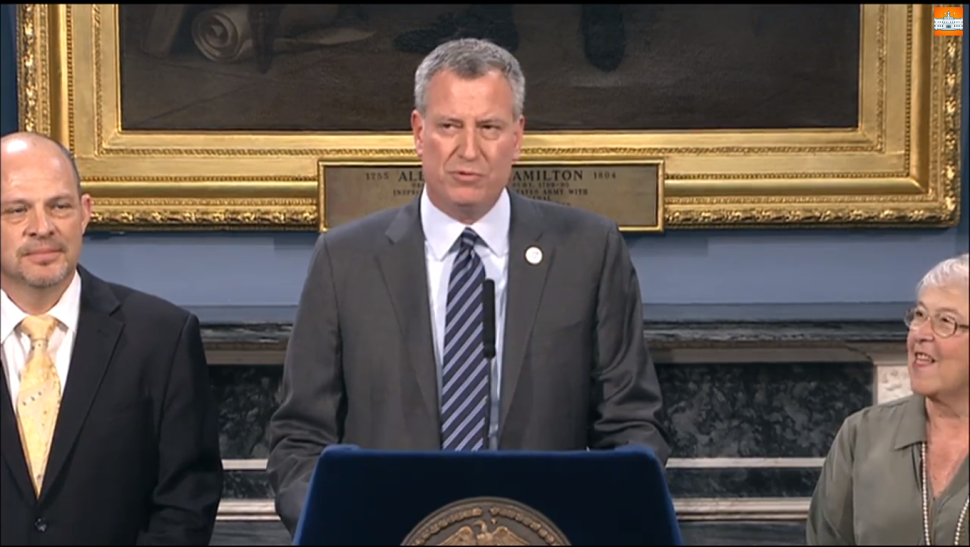