We brought a Dixie Cup full of daisies. Our neighbors brought china, a table runner and a gas lamp.

In true New York form, Saturday’s pop-up dinner in Prospect Park had all the hallmarks of a quasi-trendy event: you were in the know, but wildly inadequate.

There was no need to follow a yellow brick road to find the secret location released just two hours before the event. The parade of white-clad New Yorkers lugging enormous flower arrangements and Whole Foods paper bags led the way.

Mimicking the exclusive Le Dîner en Blanc, which has made a name for itself first in Paris and more recently Bryant Park, the Acura-sponsored dinner offered patrons the chance to escape from city life and join fellow New Yorkers under tea-lights to show off their finest table decorating and cooking skills.

“I was really stressed out about whether we would be on par with everyone else, and then the girls next to us had like pudding cups, and I was like ‘oh, we’ll be fine’,” Andrea Atehortua told the Observer, as she waited in line for the photobooth set up among the outlying trees.

And while those of the pudding cup variety were in the majority, a few party-goers came ready to win. Win what, we’re not sure, but the petticoats and three-foot candelabras surely stood out.

“We were hoping this was some sort of competition,” MasterChef winner Luca Manfe said, as he doled out grilled vegetables and meatballs from his glazed ceramic cookware to the friends gathered around his rustically decorated table.

“I pushed my daughters in their strollers and on the swings here, they played Little League baseball and soccer here and now that I’m an old guy, I ride my bicycle through Prospect Park,” said Senator Chuck Schumer before leading the crowd in a toast to start off the night.

The dinner, held right along the park’s lake, was a sight to behold, with many park-goers stopping along the picket fence (white, of course) to get a peek into the lives of New York’s bourgeoisie.

The ticket’s cost didn’t just cover admission though. There was also an appearance from indie singer/songwriter Ben Folds, who jammed on his piano in the center of the crowd after the sun set. While a few members of the crowd were singing along full blast, the majority of the crowd was happy to bob along amidst the gnats that decided to join the party.

“A bug just flew into my mouth,” Mr. Folds told the crowd. “I’m sorry but I’m killing bugs on this piano. Oh, that’s a green one.”

The few citronella candles burned through the tables as patrons crowded the stage, standing on chairs to capture the perfect Instagram photo as the strings of tea lights lit the meadow.

Mr. Folds, true to form, improvised a song for the pop-uppers, his voice echoing through the park.

“Let’s see what the fuck you’ve got,” he shouted, starting to sing. “We’re gonna rock this bitch in the park for an hour…. Let me tell you what its like to be dressed in white.” 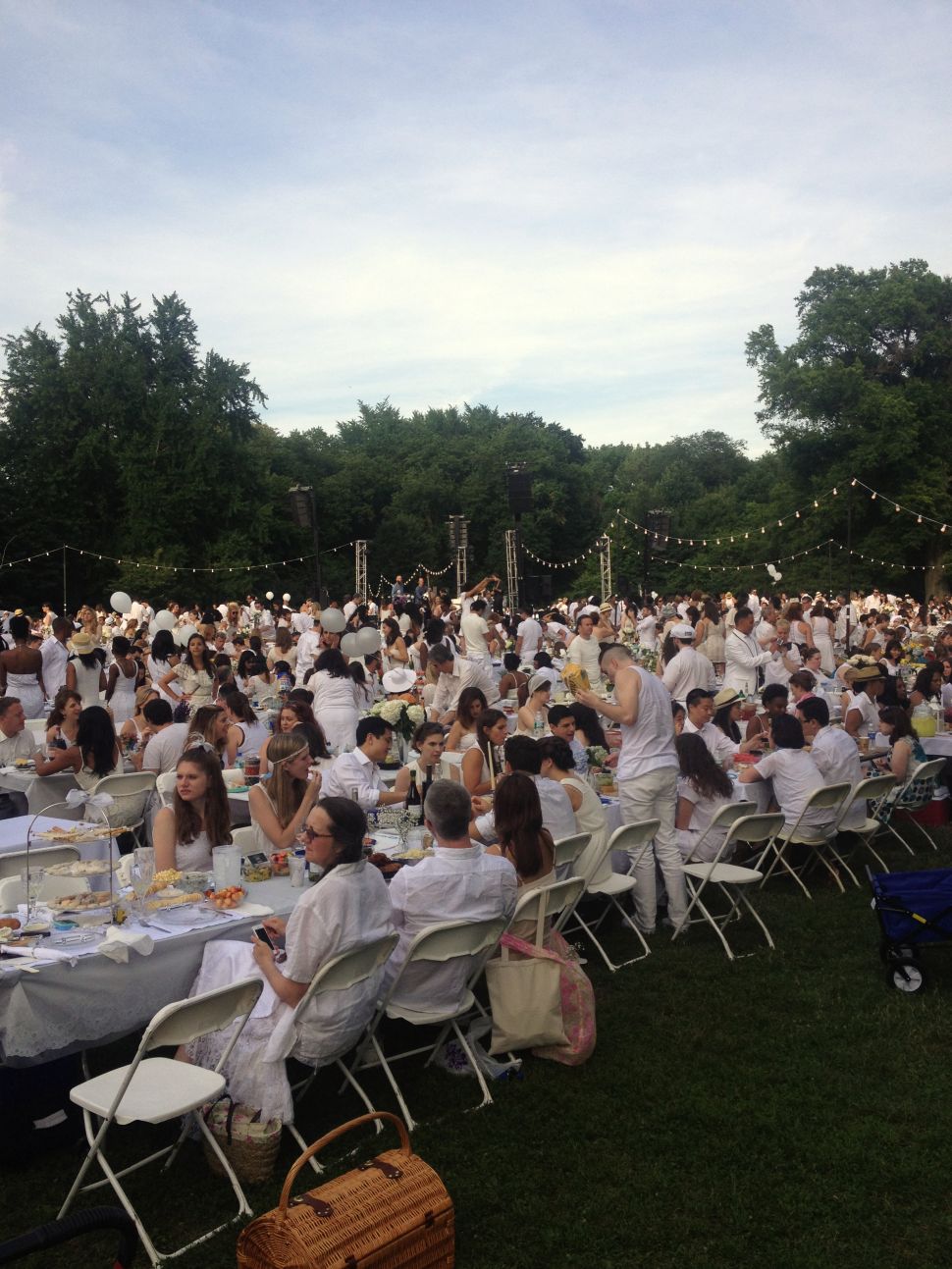