“As the business, creative and cultural Capital of the World, New York offers the Democratic Party the archetypal backdrop to showcase our ideas, our party members and our nominee to the American people in a Democratic state,” the letter to DNC Chair Debbie Wasserman Schultz led. “The Barclays Center is a convenient and exciting venue that has been well-equipped to host a multitude of sporting events and concerts since its opening in 2012, making it the ideal location for any large event.”

The letter curiously makes no mention of Manhattan, its destinations, or its accommodations–even recommending that attendees stay at hotels in Queens close to LaGuardia airport–even though several of the authors also represent the densest borough. Instead, the group simply sang the praises of the County of Kings as the perfect place to nominate a president.

“Brooklyn embodies the progressive soul of the Democratic Party and will provide the perfect backdrop to an exciting and inspiring DNC convention,” said Mr. Nadler, whose sprawling district includes Madison Square Garden but not the Barclays Center. “Not only will a 2016 convention hosted in the greatest city on earth help lead to a Democratic victory on Election Day, with some of the best hotels and restaurants in the world, the attendees will have a good time.”

The writers of the letter constitute all of Brooklyn’s representatives at the federal level, with the exception of lone Republican Congressman Michael Grimm, whose seat covers much of the southern end of the borough.

U.S. Senators Charles E. Schumer and Kirsten E. Gillibrand and Representatives Jerrold Nadler, Carolyn Maloney, Nydia Velazquez, Yvette Clarke and Hakeem Jeffries today launched a campaign for the Democratic National Committee (DNC) to select New York City’s bid to host the 2016 convention at Brooklyn’s Barclays Center. The representatives of Brooklyn urged DNC Chairwoman Debbie Wasserman Shultz to select the Big Apple’s application, given that the city is a diverse, cultural hub that embodies the spirit of the Democratic Party. The officials also noted Brooklyn’s proximity to hotels, restaurants and tourist attractions, and its access to the best transportation system in the world.

“Brooklyn’s new Barclays Center is the perfect spot for the 2016 Democratic National Convention and other cities should fuhgeddaboutit,” said Senator Chuck Schumer. “Brooklyn is a cultural center and is home to a diverse population that embodies the essence of the Democratic Party, in addition to having a wide array of transportation options and limitless attractions and hotels. Joined with Brooklyn’s representatives in Congress, we urge the Democratic National Committee to vote for Barclay’s Center in 2016.”

“New York City has shown over and over again from the Super Bowl to previous Democratic conventions that we are the biggest and best stage for a big event,” said Senator Kirsten Gillibrand. “Brooklyn is more vibrant than ever before and has everything you could hope for to ensure a memorable convention. I hope to welcome our party’s delegates to Brooklyn in 2016.”

“By hosting the 2016 DNC convention in New York City, we will be able to showcase our nation’s diverse cultural fabric and a platform that represents the best values of our party. Brooklyn embodies the progressive soul of the Democratic Party and will provide the perfect backdrop to an exciting and inspiring DNC convention,” said Congressman Jerrold Nadler. “Not only will a 2016 convention hosted in the greatest city on earth help lead to a Democratic victory on Election Day, with some of the best hotels and restaurants in the world, the attendees will have a good time.”

“No city is better equipped or better suited to host our party’s 2016 nominating convention than New York City in general and Brooklyn’s Barclay Center specifically,” said Congresswoman Carolyn B. Maloney. “Not only are Brooklyn residents, and indeed New Yorkers as a whole, civically engaged and supportive of the Democratic party’s core values, but we know how to throw a really great party. With all that Brooklyn has to offer — great space, superb restaurants, convenient transportation and, of course, fantastic, warm, welcoming people — this selection should be a no-brainer.”

“Brooklyn has emerged in recent years as a cultural and economic anchor of not only New York City, but also of the entire U.S., making it the ideal location for the Democratic Convention,” said Congresswoman Nydia M. Velázquez. “With its cultural and creative vibrancy and unparalleled diversity, New York would serve as the perfect backdrop for nominating our party’s next Presidential nominee.”

“Brooklyn has always been the starting place for the American Dream, where people from around the world have come to build a better future for themselves and their children. The same spirit that animates Brooklyn animates the Democratic Party: the belief that everyone should have the opportunity for full participation in our society. We are a diverse community that has much to share with our fellow Americans, as I believe the Democratic National Convention here in 2016 will demonstrate to the thousands of guests and millions of viewers at home,” said Congresswoman Yvette Clarke.

‎”The great strength of the Democratic Party is the fact we represent the broadest cross-section of America, in terms of race, religion, gender, sexual orientation and region,” said Congressman Hakeem Jeffries. “There is no better location to put on full display the gorgeous mosaic of our party than in Brooklyn, one of the most diverse places in the world. In times of great challenge, we know how to bring people together. That is why I strongly support the mayor’s effort to bring the convention to the county of Kings.”

The Barclays Center is a convenient and exciting venue with 18,000 seats that has proven well-equipped to host a multitude of sporting events and concerts since its opening in 2012. It can be reached by eleven different trains and eleven different buses. In addition to the NYC subway, it is located along the Long Island Rail Road and along multiple bike paths. Due to its various nearby transportation options, individuals can stay at hotels all over New York City and the surrounding metropolitan area, and reach the Center quickly and inexpensively. The Barclays Center is surrounded by a host of restaurants, theatres, libraries, museums and parks that highlight New York City’s importance as a cultural hub.

Beyond the advantages of the Barclays Center itself, the members of Congress also touted that there are two international airports in close proximity, as well as access to Amtrak’s Northeast Corridor, making the city central and accessible for those traveling from out of state for the events.

In addition to New York City, there are five cities in the final rounds of competition to host the 2016 DNC: Birmingham, Cleveland, Columbus, Philadelphia and Phoenix. New York City has hosted similar conventions in the past. Madison Square Garden hosted four successful Democratic conventions, including President Bill Clinton’s nomination in 1992, and one Republican convention, for President George W. Bush’s reelection in 2004.

A copy of their letter can be found below:

We are pleased to offer our support for New York City’s bid to host the 2016 Democratic National Convention at the Barclays Center in Brooklyn, New York. As the business, creative and cultural Capital of the World, New York offers the Democratic Party the archetypal backdrop to showcase our ideas, our party members and our nominee to the American people in a Democratic state. The Barclays Center is a convenient and exciting venue that has been well-equipped to host a multitude of sporting events and concerts since its opening in 2012, making it the ideal location for any large event.

The Barclays Center has the ability to seat 18,000 individuals, which will make it more than capable to handle the large crowds that the Democratic National Convention will draw. It can be reached by eleven different subways, including the 2, 3, 4, 5, B, D, N, Q and R trains. These trains connect individuals from all over New York City to the Barclays Center, making it an extremely accessible location. There are also eleven different buses that stop by the Center, a Long Island Railroad stop across the street and multiple bike paths that provide alternative methods of transportation. The Barclays Center is also surrounded by a host of amenities and attractions including restaurants, theatres, libraries, museums and parks that highlight New York City’s importance as a cultural hub. The up-and-coming areas of Brooklyn around the Barclays Center are home to a young, diverse group of individuals. The inclusion of diverse ideas and culture represent what’s best about our Party, while staying true to its ideals.

The Barclays Center has received multiple awards that make it an even more attractive venue, given that it is such a new facility. It also received a LEED Silver Certification for New Construction from the U.S. Green Building Congress, which gives it a unique status amongst similar venues in New York City. Its commitment to sustainable practices highlights some of the Party’s goals. 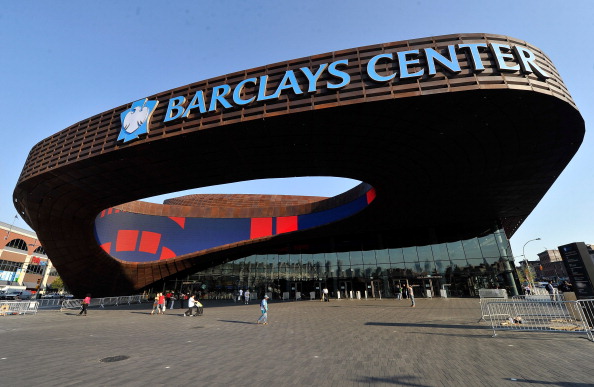