There are stones on a crypt underneath the main altar in St. Patrick’s Cathedral. The crypt contains the remains of Cardinal John O’Connor, archbishop of New York from 1984 to 2000. The stones were left as a tribute to the Cardinal from his many Jewish admirers, including, most famously, Ed Koch, who served as mayor during a portion of the Cardinal’s tenure in St. Patrick’s.

New York’s Jewish community embraced Cardinal O’Connor almost as if he were one of them. And now, it turns out, he was. The New York Times revealed the other day that the Cardinal’s mother was born Jewish, and was the daughter of a rabbi. By Jewish law, John Joseph O’Connor, the son of a working-class Irish family from Philadelphia and a product of Catholic schools, was, in fact, a Jew.

The Cardinal used to say that there was no such thing as a coincidence. He said he preferred the term “God-incidence.”

It would seem an appropriate way to describe his own extraordinary story, and the story of his historic bridge-building between Christians and Jews not only in New York but throughout the world.
New Yorkers of a certain age will remember that Cardinal O’Connor reached out to New York’s Jews in ways no cardinal had ever done before. (Although, speaking of God-incidences, the man O’Connor modeled himself after, 19th century Archbishop of New York John Hughes, once told his flock, “If the Jew is oppressed, stand with the Jew.”)

Cardinal O’Connor rallied New York’s Catholics to the cause of oppressed Jews in the Soviet Union—thus putting into action his predecessor’s words from the 19th century. He worked behind the scenes with Vatican officials to encourage Pope John Paul II’s equally extraordinary outreach to the Jewish community and, especially, to Israel. The cardinal, clad in the scarlet of his office, was a constant presence at Jewish community and civic functions. And he formed an unlikely friendship with Mayor Koch—in fact, the two of them wrote a book together.

They surely could not have been more gracious than the cardinal’s 87-year-old sister, Mary O’Connor Ward-Donegan, who said, “The basic fact is, my mother was Jewish. That means my two brothers were Jewish, my sister was Jewish and I am Jewish. Of that I am very proud.”

Her famous brother surely would have echoed those sentiments. 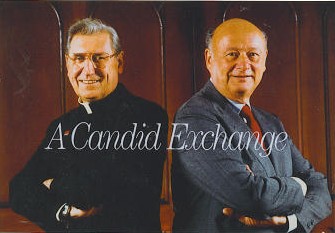