TRENTON – State Assemblywoman Bonnie Watson Coleman (D-15) rejoiced in her victory in the Twelth Congressional District Democratic prmary on Tuesday night, thanking supporters in this world and beyond while looking towards what she hopes will be a final victory in the November general election.

“To God be the glory,” said Watson Coleman in her first words to an estatic crowd of over 100 supporters inside the Lafayette Yards hotel ballroom in Trenton. “I was ready to give one speech, but instead I gave another. This is a big step to climb, but for November we will have time to plan and execute. I thank all my labor support – the Laborers, the Carpenters, SEIU, AFSCME and CWA all came out.”

“My hometown showed up,” shouted Watson Coleman with a smile as the crowd roared.

U.S. Rep. Rush Holt (D-12), whose retirement announcement earlier this year created the opportunity for Watson Coleman to potentially advance to Congress, pointed out that Watson Coleman’s win could not be attritbted solely to strong Mercer County support.

“She won all over the Twelth District tonight,” Holt said. “She had great supporters, and now she’s done it.”

Before partying with supporters, Watson Coleman looked ahead to the next critical race facing New Jersey’s capital city. 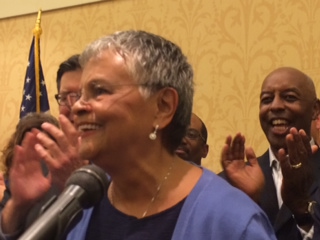