The state lawmaker, who endorsed Sen. Linda Greenstein (D-14), referred to the numbers that put Assemblywoman Bonnie Watson Coleman (D-15) over the edge to victory in the Democratic primary as “a little shocking.” DeAngelo was one of several lawmakers and officials who expressed an interest in pursuing Greenstein’s state Senate seat if the lawmaker clinched a victory.

However, a victory never materialized for Greenstein.

Instead, Assemblywoman Bonnie Watson Coleman (D-15) grabbed her party’s nomination to enter the general election in the left-leaning district.

Watson Coleman led the race by more than 4,800 votes with nearly 90 percent of precincts reporting shortly before 11 p.m., according to unofficial results from the Associated Press. 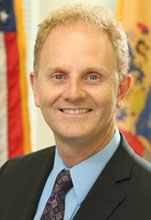