TRENTON – As the CD3 race between Republican hopeful Tom McArthur and Burlington County Freeholder Aimee Belgard gains momentum, supporters of the former are wasting no time — and mincing no words — in defining their candidate’s Democratic opponent.

Tomorrow morning, the National Republican Congressional Committee — devoted to “maintaining or increasing the 232-member Republican majority in the U.S. House of Reps” — is launching a robocall campaign with that mission in mind.

“Instead of communicating her own opinions about key issues to taxpayers in New Jersey, Aimee Belgard regurgitates the DCCC’s liberal and tired rhetoric that is sent to her every morning by Nancy Pelosi’s campaign organization,” NRCC Communications Director Andrea Bozek said in a statement obtained by PolitickerNJ but slated for general release tomorrow. “Belgard owes it to voters to stop relying on cookie-cutter talking points and start substantively explaining her support for Pelosi’s liberal agenda.”

The live calls will go out to residents throughout the district, which encompasses parts of Burlington and Ocean counties, and will run like this:

“I’m calling from the National Republican Congressional Committee with an urgent message about Democrat Aimee Belgard. Belgard wants to be elected to Congress, but when reporters ask her about where she stands on the issues she just repeats generic talking points from Nancy Pelosi and her campaign team. Voters deserve to know why Belgard supports ObamaCare and what fixes, if any, she would offer if elected. And will Belgard call for an independent special prosecutor to investigate the abuses and cover ups at the IRS? Call Aimee Belgard today at 609-760-2444 and tell her to start answering reporters’ questions.”

The robocall is the latest effort by MacArthur backers to call out Belgard — who MacArthur’s campaign team bashed in their own press release issued earlier today — on a perceived refusal to engage seriously in the campaign. They say she’s stuck doggedly to “canned, spoonfed stuff from the D-triple-C,” and has hid behind her campaign staff or emails when prompted with questions from reporters and MacArthur campaign staff.

Most recently, according to the Republican’s camp, she’s skirted requests to set up a debate between the candidates despite claiming in a statement issued last week that “voters deserve a robust debate of the issues.”

“I’ll let the NRCC speak for their own release but ours is along a similar line, which is we’ve issued a challenge, and we find it hard to believe that a campaign is too busy to talk about a campaign,” MacArthur campaign strategist Chris Russell told PolitickerNJ. “Tom MacArthur wants this race to be about the issues.  That’s why he challenged Aimee Belgard to debate starting in July.  Instead of engaging Tom on the issues, though, Belgard would rather attack him for being successful.  That kind of class warfare nonsense will fall flat with Burlington and Ocean County voters.”

But the anti-Belgard campaigns also raise questions in a district where MacArthur seems already to be trouncing the competition. With the exception of the late John Adler, who won narrowly the seat in 2008 on a ticket headed by Barack Obama, MacArthur, many believe, has the support of a district that’s leaned Republican for as long as anyone can remember.

A businessman and former Randolph mayor, he also has the money to self-fund. MacArthur reported $2 million cash-on-hand with two weeks to go before the Republican Primary, and is said to have already restored about that amount in the time since.

Belgard, comparatively, may have some name recognition in Burlington County’s half of the district where she serves as a freeholder, but lacks standing in its Ocean County side, where Republicans outnumber Democrats 53,492 to 39,619. She had $332,104 in the bank at last count, most of it from voter contributions.

So isn’t it a little early to be gunning so hard against an ostensibly inferior competitor?

“In theory it’s never too early,” Wyatt Earp, chairman of the Ocean County Democrats, told PolitickerNJ. “The Republicans will do anything they can to hold on to that seat.”

Earp, who along with the OCD threw his support behind Belgard back in March, fails to see anything amiss with the Democrat’s campaign thus far. Asked about the spoon-fed-by-DCCC accusation, he laughed.

“They’re accusing her of pushing the Democratic party line all the time, but I’d say she’s giving her CD-3 line all the time, which is just where we want to be,” Earp said. “People care about these issues — access to healthcare, rights for military veterans.”

Vin Gopal, a businessman and Democratic Party fundraiser who anticipates the race in CD3 to be “one of the most watched races in the country”, said the NRCC’s robo-call campaign hints at the fact that the race might be closer than anyone expected.

“It says they see her as a very serious threat,” Gopal said. “They’re spending all this money and resources and it’s only June. They must have some polling or data showing that this is turning out to be a very competitive race.”

Gopal, Earp and other Belgard allies argue that despite other advantages, MacArthur still lacks the local presence to beat out the Burlington County attorney. Both he and Steve Lonegan — MacArthur’s tea-party challenger in the Republican Primary — re-located quickly to the district after U.S. Rep. Jon Runyan (R-3) announced his retirement.

That might also explain the eagerness on the part of the NRCC to use tomorrow’s live calls to get MacArthur’s name out to unfamiliar voters.

“As someone who is not a known personality in the district, this is one of the key things that you do,” Monmouth University pollster Patrick Murray told PolitickerNJ, though he added he doesn’t put much faith in the maneuver’s payoff.

“Robocalls are much less effective than they ever were,” he said.

He also said it’s too early to trust polling numbers in the district.

“I don’t think anyone has any confidence in the polling coming out of either camp right now,” he said.

Russell, for his part, agreed on the polling point, adding that he doesn’t think the NRCC’s campaign is “a reflection of whether the race is close or not.”

“We consider Belgard a serious challenger and we’re going to take it that way,” Russell added. “But if she’s going to run a serious campaign then she should be willing to stand up with Tom MacArthur and debate the issues. She’s the one out there saying that this the closest race in New Jersey and this is one of the most watched congressional races in the country — that’s her promoting that. If it is those things, and she claims it is, then why would she not want to debate the guy? Why can’t her campaign engage us on setting up a debate for July? We’re ready to go.”

The Belgard Campaign struck back in a statement.

“Washington Republicans will do anything to distract voters from the fact that their hand-picked candidate made millions by helping AIG shortchange the victims of hurricanes and wildfires in a district where thousands of people are still displaced from Superstorm Sandy because of the same shady insurance practices,” said Campaign Manager Hannah Ledford.

“Washington Republicans chose MacArthur because they know if he wins, he’ll head to Washington and immediately take the side of the insurance industry and big corporations that ship American jobs overseas, and shift more of the burden onto the middle class. The choice in this election is between Aimee Belgard, a nationally recognized advocate for cancer research who has a strong record of standing up for her community, or an out-of-touch North Jersey insurance executive. It’s going to take way more than a pathetic robo call from terrified Washington Republicans to convince voters that their disastrous candidate is the right choice for the third district.” 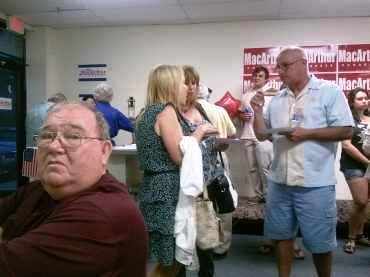