Congressman Charlie Rangel arrived late and seemed unsure of where he was at possibly the last campaign stop of his career.

Tish James and several union members stood against a backdrop of Mr. Rangel’s face atop a flatbed caravan at the corner of Mosholu Parkway and Jerome Avenue–the northernmost extremity of the mostly upper Manhattan contested district. One of the union members waved a pole with the flags of the United States and the Dominican Republic.

A pair of protestors held up signs lamenting the inability of registered independents to participate in today’s primary, and choose whether they want to be represented by Mr. Rangel, State Senator Adriano Espaillat, or Pastor Mike Walrond.

“We don’t mind them having [the primary],” said Jason Martinez. “We just mind paying for it.”

The crew of two dozen 1199 members occasionally broke into chants of “Charlie! Charlie!” Nobody was able to answer where Mr. Rangel was, or what was taking him so long to arrive. A few minutes shy of 5 p.m., Ms. James got down off the trailer and walked toward her vehicle.

“Tish, you leaving?” One woman called.

“No, I’m going to call and find out where he is,” Ms. James answered.

Almost as if by magic, a Lincoln Town Car carrying the congressman turned the corner and stopped. Press and supporters rushed toward the vehicle.

Mr. Rangel got out laughing and smiling, made a statement thanking Ms. James for her support, then asked the press if there were any questions. A reporter asked Mr. Rangel why he was late.

“Are there any real questions?” the congressman laughed in response.

The veteran legislator reiterated his call for a moratorium on subsidized luxury development, and argued instead for a greater focus on assisting the middle-class.

“Taino Towers could sure use it,” Mr. Rangel said, nodding toward the Tracey Towers, but referring to them by the name of the public housing complex in East Harlem where the incumbent will hold his party tonight. 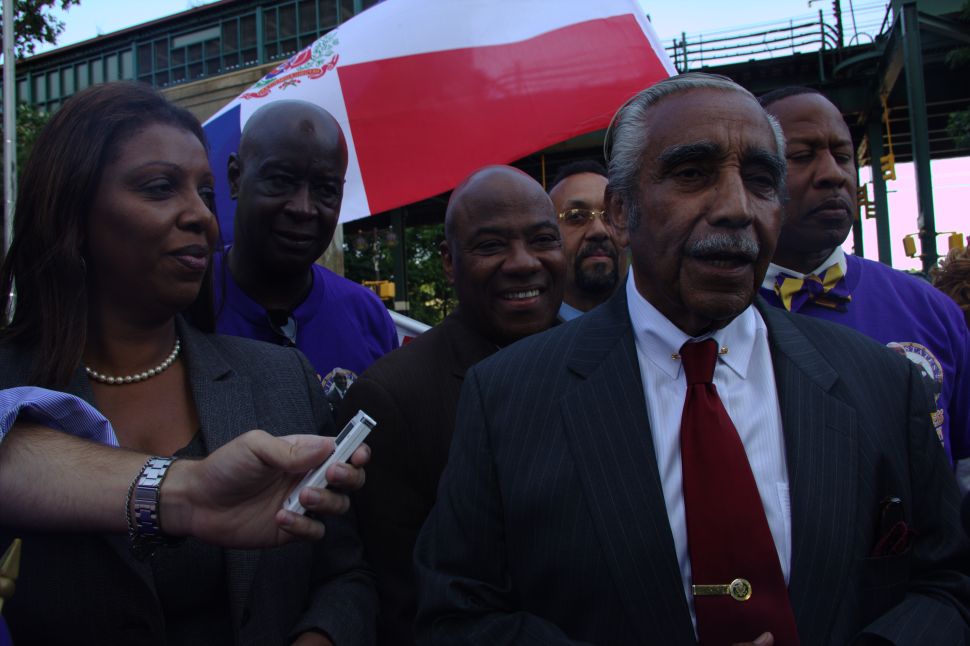