There may not be many Americans at Art Basel compared to the droves of Europeans, but this morning, the buzz here briefly centered around New York City when Lisson Gallery announced plans to open a brand spanking new 8,500-square-foot space in Chelsea, constructed under and around the High Line. Nearly 50 years after Nicholas Logsdail opened Lisson’s outpost in London, they will now have a permanent place across the pond.

The gallery will be run by Mr. Logsdail’s son, Alex, the young dealer who’s helmed Lisson’s Lower East Side office since it opened in 2012. After hearing the news, we dropped by their booth to find the dapper Alex standing with colleagues near a table with champagne, appropriately enough. He was clearly excited about the project.

“We’ll have these really monster skylights—like, really—and it’s the whole block, all the way through,” Mr. Logsdail said.

Though chatter has foretold Chelsea’s decline for a few years now, he said they looked all over town (well, Soho and the Upper East Side) but settled on the old reliable ‘hood.

“Chelsea’s not going anywhere,” he said. “There’s nowhere with that size, with that scope.”

In just its second year downstairs at the fair, Lisson did nice work—Mr. Logsdail told us 70 percent of the works were gone on the first day, including a large blue Anish Kapoor orb that the dealer called “not for the faint of heart.”

After a few minutes, another colleague came up with a glass of champagne, but with a few hours left of the second day of the VIP preview, Mr. Logsdail declined.

“We still have to sell some stuff,” he said. “We’ve got a building to pay for!” 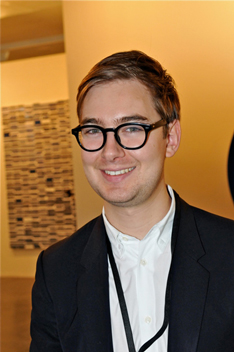