Am I excited that Denis Leary is returning to FX for the first time since Rescue Me ended in 2011? Yes. Am I 1000% more stoked that he will be rocking the most ridiculous-looking, Joe Dirt-esque mullet wig as main character Johnny Rock in Sex&Drugs&Rock&Roll? Yes, and look at this glorious picture and tell me you disagree.

I suppose if I must I should probably provide some more details on the show. Before I do, let’s look back up at that picture one more time, together. Okay, here we go.

Starring alongside John Corbett, Elizabeth Gillies, Elaine Hendrix and Bobby Kelly, Leary will play the aforementioned Johnny Rock, a washed up rock-star who was this close to being the next big thing in the early 90’s with his band The Heathens.. Now, 25 years later, Johnny wants to get the band back together. Dark, FX-style hilarity ensues.

“Our partnership with Denis and [Leary-founded production company] Apostle has been one of our most fruitful ventures, and this time out fans will definitely see a different Denis,” Fox Television Studios President David Madde said in a release. “As both actor and writer, Denis plunges into dazzlingly original arenas of dark comedy and, along with a stellar veteran cast, the results are just really funny.”

The show, created and co-executive produced by Leary, is set to premiere in 2015, and will film on location in New York. Which includes scheduling around my attempts to sneak on set and steal that mullet wig.

SPEAKING of the mullet wig, here is another fantastic picture featuring Leary and a white cardigan thing that my father probably wore to his prom. Consider me sold. 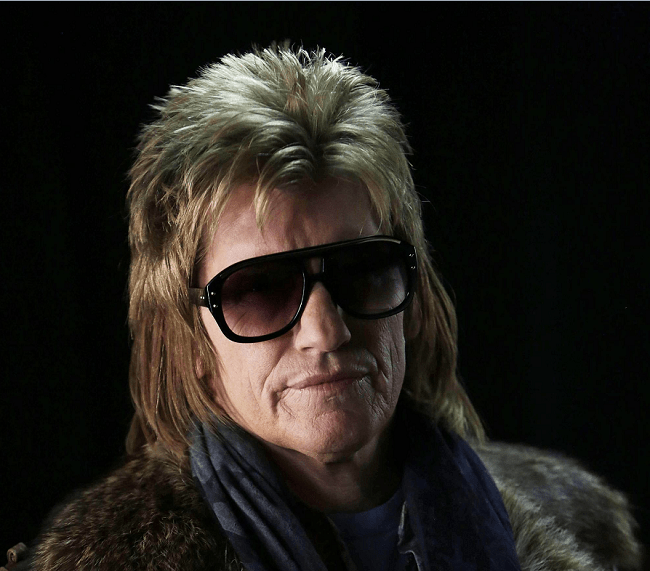