After three weeks of construction delays and gloomy weather, the new version of Coney Island’s Thunderbolt roller coaster will take its inaugural run this Saturday.

The original Thunderbolt was a staple at the Coney Island of yesteryear. Designed by John Miller, (known as the “Thomas Edison of roller coasters“), the wooden coaster stood at 86 feet tall. It operated between 1925 and 1982. In 2000, its skeleton was finally demolished.

The 2014 reincarnation of the Thunderbolt is bigger and better. Built and operated by Central Amusement International (CAI) through private investment, the upgraded version will sit on the site of the previous Thunderbolt, next to the historic B&B Carousell and the new Steeplechase Plaza. The 125-foot tall steel coaster features over 2,000 feet of track that takes thrill-seekers on a 90-degree vertical drop, 100-foot vertical loop and a corkscrew at speeds of 65 miles per hour.

“This is going to be the first steel custom roller coaster in Coney Island since the debut of the Cyclone in 1927,” said Valerio Ferrari, President of Central Amusement International, LLC.

The ride was slated to open Memorial Day weekend, but finishing touches couldn’t be completed in the rain, Metro New York reports.

Luckily, tomorrow’s forecast calls for clearer skies and a high of 79, making it a perfect weekend to take a thrill-ride down the Thunderbolt’s orange and white tracks. If you’re feeling a little scared, check out this New York Times video of a test run, featuring NYT reporter Andy Newman’s adorable 9-year-old daughter. 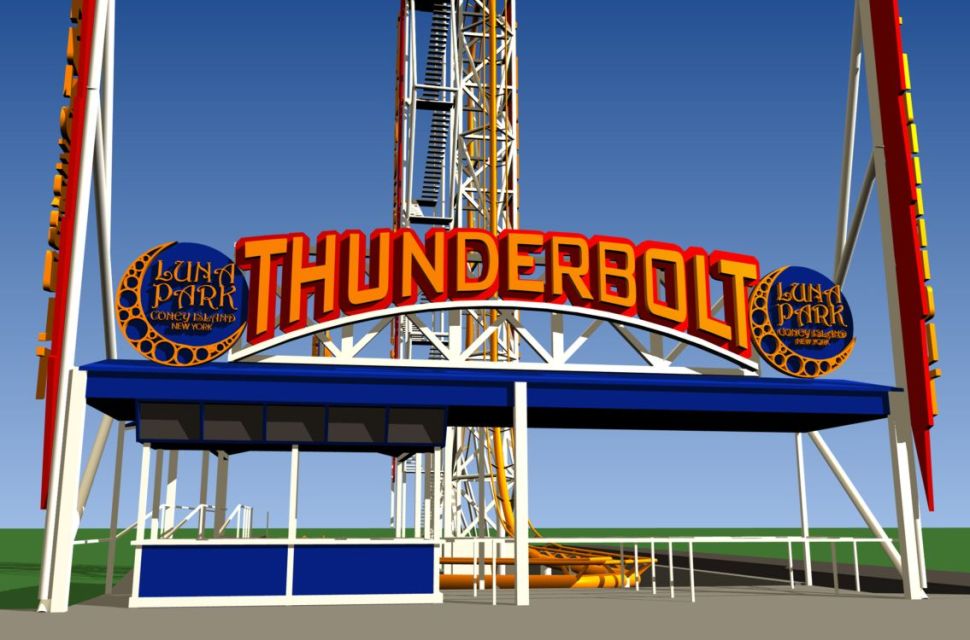