TRENTON – The Budget Committee this evening passed a bill (A-3487) sponsored by Assemblyman Joe Cryan (D-20) that would require the state to make quarterly pension contribution payments; on July 15, October 15, January 15 and April 15 of each fiscal year rather than making a single contribution annually.

“Our state’s public workers deserve better than the broken promises of this administration,” said Cryan, referring to Gov. Chris Christie vow three years ago to maintain pension payments, which he broke to address the state’s budget crisis.

A judge’s ruling on a suit by public sector labor against the governor’s pension-depleting budget plan is due tomorrow.

“Over the last few years, our teachers, police officers, firefighters and so many others who have served honorably in New Jersey have been penalized with a reduction in benefits by a governor who said he wouldn’t touch their pensions. Now, by deliberately disregarding the law and failing to make pension payments, he simply adds insult to injury with his budget proposal,” Cryan said. “The governor’s repeated abuse of power is just a Band-Aid response to his own irresponsible one-shot gimmicks.” 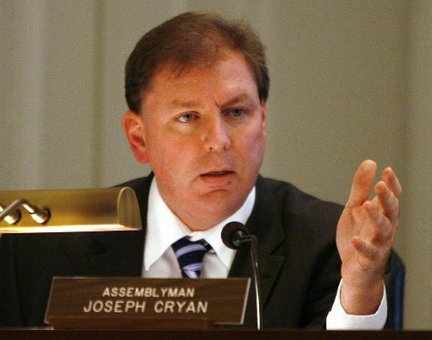