Comedian Dave Chappelle made his first Late Show appearance in ten years, and he used that opportunity to finally explain what happened with Chappelle’s Show, and what he’s been doing since. Kind of. Not really though.

You see, most headlines about this interview read something along the lines of “Chappelle Finally Puts to Rest Chappelle Show Rumors.” But this, directly from Mr. Chappelle’s mouth.”Technically, I never quit. I’m seven years late for work.”

Audience laughs, of course, but what? What does that mean? How is that allowed? Some other tidbits we learned from the interview: Mr. Chappelle walked away from an enormous sum of money when he left Chappelle’s Show. But during a dinner with his wife he realized money isn’t everything. He doesn’t regret walking away. Except the difference between $10 million and $50 million is $40 million, so of course he regrets walking away. But he doesn’t. But he does.

Well I’m glad its been put to rest.

Listen, I love Dave Chappelle, and really wish I was going to his Radio City shows that he was actually there to promote. Dave Chappelle may very well be a comedy genius. But much like some other, ahem, “geniuses,” he’s not very good at explaining himself Especially when he does bat-shit crazy stuff like leaving his multi-million dollar TV show and moving to South Africa.

Maybe Mr. Chappelle doesn’t really owe anyone any explanation. He most definitely doesn’t owe me an explanation. But that won’t stop me from being bitter that this was torn away from me forever. 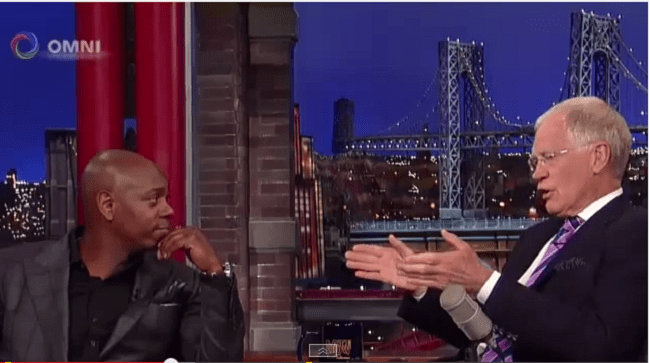