As the Washington correspondent for the Jewish Forward newspaper, I once drove the two hours south to Richmond to report a feature article about that city’s Jewish community.

The stop that sticks in my mind to this day was the Hebrew Confederate Cemetery. Thirty Jewish soldiers who fought and died for the South in the Civil War are buried there on a hilltop behind an elaborate fence made to look like a series of crossed rifles.

The contradiction inherent in the free descendents of Egyptian slaves (at least if you believe the biblical book of Exodus) fighting to preserve slavery in America was jarringly obvious, at least to this Northerner. Beyond that, though, the graveyard was a reminder that Jews have been in the South for a long time. And that while there is a certain apartness to the Southern Jews — the Hebrew Confederates are buried with their fellow Jews, as Jewish tradition dictates — there are also ways in which they mesh seamlessly with the surrounding culture.

It’s a point to recall amid the rush of speculation about whether the Judaism of the House Majority leader, Eric Cantor, played any role in his surprise defeat in the recent Republican primary. It was the “elephant in the room,” an analyst at the Cook Political Report, David Wasserman, told the New York Times, asserting that, as the Times paraphrased it, “Mr. Cantor, who dreamed of becoming the first Jewish speaker of the House, was culturally out of step with a redrawn district that was more rural, more gun-oriented and more conservative.” (Though the New Republic’s Jason Zengerle punctures that theory by pointing out that “Cantor actually won the less populous parts of Virginia’s Seventh. It was in the Richmond suburbs, which had always been Cantor’s base, where he got trounced.”)

Mr. Cantor’s own family came to Richmond some generations after the Civil War. As the congressman told the story in remarks prepared for delivery in 2011 at the University of Pennsylvania’s Wharton School, his grandmother arrived there from Eastern Europe at the turn of the last century. “In the early 20th century, the South wasn’t often the most accepting place for a young Jewish woman,” Mr. Cantor recalled. “Widowed by age 30, she raised my father and uncle in a tight apartment above a tiny grocery store that she and my grandfather had opened.”

Mr. Cantor wasn’t a Confederate Jew; he was a newcomer Jew. The relatives he spoke and wrote about weren’t soldiers in Lee’s army or cabinet members in the Jefferson Davis administration, but Daniel Cantor Wultz, his cousin from Florida who died at age 16 while visiting Israel for Passover in 2006, the victim of a terrorist bombing attack on a Tel Aviv shwarma restaurant.

The editor of Commentary, John Podhoretz, who calls the very suggestion that Mr. Cantor’s religion played a role in his primary defeat “appalling” and “repugnant,” as well as “especially disgraceful,” notes that the voters who were supposedly so anti-Semitic as to vote Mr. Cantor out were the same ones who had elected him for the previous 20-plus years.

There is indeed something unseemly about the eagerness with which the New York and Washington-based press corps and talking heads rush to ascribe anti-Semitic motives to rural Republican primary voters, even as this same press corps largely ignores the epidemic of genuinely ugly, non-imaginary anti-Semitism on display in, say, the campaign on elite college campuses and scholarly associations to boycott, divest from, and sanction Israel.

As for the successful challenger to Mr. Cantor, Dave Brat, he’s hardly some tobacco-juice-spitting redneck. He’s a professor of economics who is fond of Milton Friedman. Dave Brat grew up in Michigan, the son of a medical doctor, Paul Brat, who now lives in St. Paul, Minnesota. His voice, unlike Mr. Cantor’s, betrays no sign of a Southern accent.

In his campaign speeches, Dave Brat made much of the fact that he left the Arthur Andersen accounting and consulting firm to attend the Princeton Theological Seminary, where, he claimed, Virginia’s own James Madison also studied. It’s a bogus claim — Madison went to Princeton University, not the Princeton Theological Seminary, which wasn’t even founded until 1812, when Madison was already serving as president of the United States. Though Princeton is a Presbyterian seminary, Mr. Brat reportedly now attends a Roman Catholic church with his wife, who is Catholic.

The Constitution Madison crafted contains in Article VI an emphatic clause asserting that “no religious test shall ever be required as a qualification to any office or public trust under the United States.” No, ever, any.

Madison’s home at Montpelier is in the Seventh Congressional District of Virginia, where the Episcopal church was long dominant. The voters there apparently take the Constitution seriously enough that when it came time to vote out the Jew, they didn’t flinch at replacing him with a different politician who goes to Catholic church. Somewhere, Madison is smiling down on all of us, which may or may not be much consolation to Eric Cantor if he decides to take a walk on a sunny day past the Hebrew Confederate Cemetery as he ponders what to do next and wonders just how it was that a son of the South like him was unseated by a college professor from the North running anti-amnesty commercials urging voters to “take your country back.”

As identity politics go, especially in the South, sometimes it’s awfully hard to sort out what’s backsliding and what’s progress.

Ira Stoll is editor of FutureOfCapitalism.com and author of JFK, Conservative. 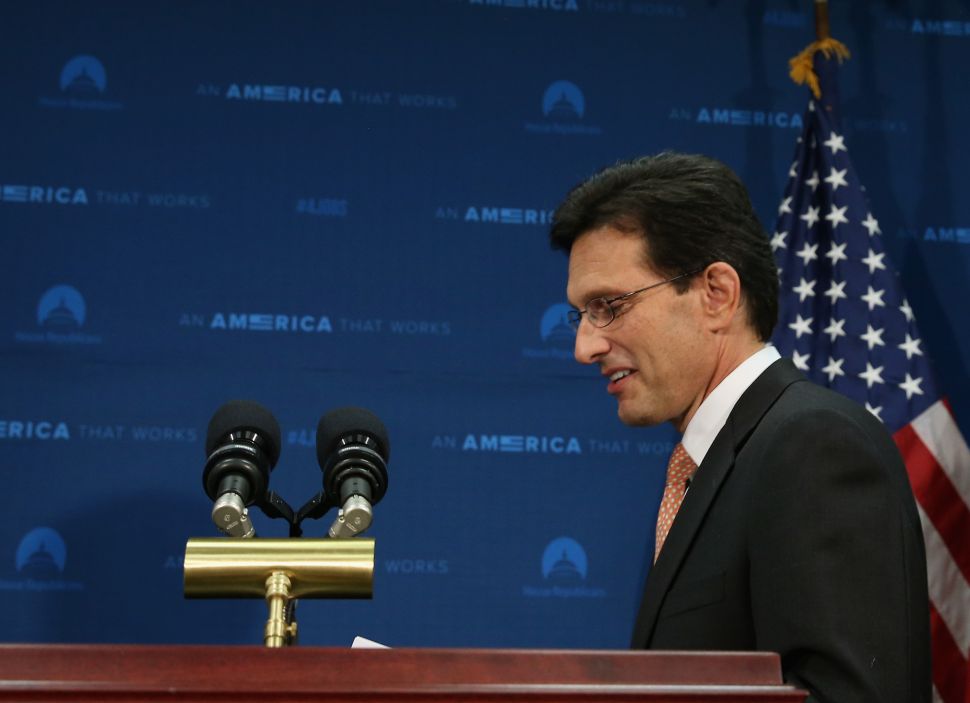