Last week on Faking It, Karma gave up her V-card to Liam in his feelings teepee. This week, they are still in the art room (maybe the art room is a Buffy-Riley sex trap of evil?) and living out somebody’s pottery-fueled Ghost fantasies. But seriously: does no one else at the school use the art room? Liam tells Karma that he’s really happy and wants to take their love public, but Karma starts humming “Secret Lovers” and reminds him that if he doesn’t want to get blamed for breaking up the school’s cutest lipstick lesbians, they have to wait until she and Amy can fake break up and have an appropriate mourning period and then she and Liam can go public. Then they make out in the art room some more before they must be separated for a few hours while Karma attends Amy’s mom’s wedding.

Speaking of Amy’s mom, while it hasn’t really been mentioned before, apparently she’s a bit of a marriage-oholic and has swapped rings with more than a few good men. Still, Amy assures her that “this dress is the best one yet,” and that’s all a good Christian Texan meteorologist needs to hear! While Amy braces herself for another of her mom’s big day, Karma is secretly texting Liam and lying to Amy about it. Not telling your BFF about losing your virginity to the hottest guy in school is the most unbelievable thing on this show and that’s saying a lot. And yet: Amy has no idea that Karma and Liam are engaged in a pants-free collaborative art project.

Meanwhile, Shane is getting a steady stream of texts from Pablo, Lauren’s dance partner/GBF, despite the fact that Shane uncharacteristically rebuffed his advances. When Liam realizes that Pablo is at Amy’s mom’s wedding, he decides that they must crash the wedding. They sneak into the wedding, grab cater waiter uniforms and start working the crowd while actually working as non-paid staff, because that’s a thing that teenage boys do (in sitcoms).

Amy’s mom makes Amy promise not to gay it up too much in front of the wedding guests.

Then she tasks her with the job of keeping her nana sober, which is hard. Lauren’s dad assures his bride that her mother has no clue that Amy is gay and that she “couldn’t pick out a lesbian at a Melissa Etheridge concert.” Wait, is Melissa Etheridge gay? WHAT ARE YOU SAYING, SHOW?!

Speaking of Lauren, she tells Pablo that she’s down in the dumps because her dumb jock boyfriend dumped her after Shane started the rumor about her pill use. Shane, who overhears the convo as he passes out champagne, thinks Pablo’s crush on him is dunzo now that he knows what he did. Liam is having better luck, though, as he and Karma start making out behind some shrubbery. Their surreptitious kissing is interrupted by the dulcet strains of Paula Abdul’s “Straight Up” which is apparently Karma and Amy’s song. Karma ditches Liam and meets Amy on the dance floor for a fully choreographed routine that ends with them lying on the floor giggling. Amy’s mom grounds her for acting too gay. Amy plots her revenge, but Karma reminds her that she humiliating her mom at her wedding won’t help anything.

Then Liam pulls Karma under a table and they make out while the wedding party toasts the bride and groom. When Liam makes her promise to always tell the truth, Karma pinky swears that she will., which is, of course, a giant lie. If this was the old testament times, Karma would be getting smited any second now.

Lauren’s toast brings tears to everyone’s eyes, of course. When Amy takes the stage, she flounders until she sees that Karma has crawled out from under the table. Amy decides to speak from the heart and her mother looks terrified at the prospect. Amy’s speech makes Karma finally realize that Amy has actual feelings for her.

But just as the realization hits, Liam crawls out from under the table, too, and Amy sees he and gets her pissy face on.

When Karma goes to talk to her about it, Amy just starts hollering.

But at least now Karma knows the reason for Amy’s extreme feelings. Amy is so excited to finally tell Karma about her feelings, that she simply won’t listen to Karma’s protestations of heterosexuality.

She finally gets it when Karma tells her she slept with Liam.

Lauren, of course, was eavesdropping.

Liam tells Shane that he is falling for Karma, which Shane thinks is a terrible idea. Since he’s feeling guilty about spreading rumors about Lauren, he decides to burst Liam’s bubble and tells him the whole truth about Karma, Amy and their fake relationship.

Amy is trying to drown her sorrows in champagne and a waiter is actually helping her do it, which seems legally actionable. Lauren brings her cake and empathy. Amy is naturally and wisely suspect but the two newly-minted step-sisters console each other over their break-ups.

Karma goes to comfort herself with Liam, but he’s done. Liam pulls up his big boy pants and tells her that Shane told him everything and he doesn’t believe anything she says. Karma looks stunned as Liam grabs a bottle of champagne (seriously, is no one monitoring the stash?) and walks off alone to get loaded.

For god knows what reason, Shane is still at the wedding. Pablo finds him and it turns out that he’s still very much interested. Pablo tells him, “I’m celibate.” Shane shrugs, “I’m a Gemini.” And they make out.

Karma kries on her mom’s lap and her mom still thinks she’s a lesbian and Karma doesn’t bother explaining, because she is pretty sure that her fake sexuality is the only thing her mother finds interesting about her.

Back at the wedding, Amy and Liam drunkenly stumble into each other.

Then Amy and Liam drunkenly hook up, which should make things extremely awkward come season two. 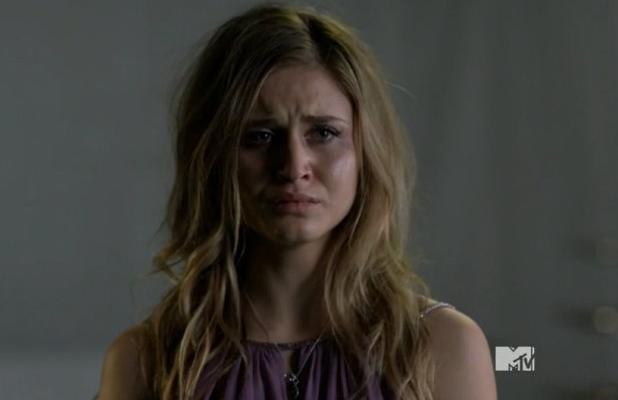