CAPE MAY COURT HOUSE – The worldview of State Assemblyman Bob Andrzejczak (D-1) was inexorably shaped in Iraq. A proud son of South Jersey, Andrzejczak, 28, has served in the Assembly since 2013 after serving with the U.S. Army’s 25th Infantry Division in Iraq from 2005 to 2010. During his second combat tour in 2009, Sergeant Andrzejczak lost his left leg during a grenade attack.

Andrzejczak has lost his patience in recent days because of two Iraq-related events.

Despite some initial professional difficulties, including working at a Cape May fish market when other jobs were hard to find, Andrzejczak successfully adjusted to civilian life. But Andrzejczak was not at ease with the results of this week’s Monmouth University/Asbury Park Press poll regarding the experiences of returning Iraq and Afghanistan war veterans.

Fully 8-in-10 (81%) New Jerseyans say that veterans of Iraq and Afghanistan have a difficult time landing a job when they return home. Only 6% believe they have an easy time finding employment. This comes despite the fact that 73% believe the skills and leadership learned in military service can be applied in a variety of work settings. Only 16% say that those skills apply mostly to military situations.

Another major issue is PTSD or post-traumatic stress disorder, according to the poll. About 7-in-10 New Jersey residents believe that at least one-quarter of those who served in Iraq and Afghanistan probably suffer from PTSD. This includes 47% of state residents who say at least half of returning vets are affected and 22% who say between a quarter and a half are affected.

For Andrzejczak, the 6% figure indicating those who believe Iraq and Afghanistan veterans have an easy time finding employment is especially galling.

“I can assure you that it’s not all hunky dory,” said Andrzejczak during a telephone interview with PolitickerNJ.com. “When I came home, I couldn’t find anything at first. On top of that, everybody always claims that disabled veterans have it best because whatever they apply for, they’re guaranteed to get it and be put at the top of the list. In reality, that’s not really true. Being a disabled veteran, you’re overcoming your disability and competing with able-bodied people. An employer might not see you as physically capable, or might see somebody else better suited for the position, so they’re going to go with them instead of you.”

Cape May and Cumberland counties, where many of the municipalities in the First Legislative District lie, have higher unemployment rates that the rest of New Jersey, but there are some jobs available, Andrzejczak noted. Yet the psychological transition to tasks far different that those found in military life is still jarring.

“How many veterans really want to go from defending our country and fighting for freedom to working at a fast food place?” Andrzejczak said, who is working on developing a job-training initiative for veterans that will help them transfer skills learned in the military to civilian life. “Those jobs are there for them, but at the same time they want to have more purpose than flipping burgers. This is why when a lot of veterans come home, some of whom have PTSD, some drown out the pain with alcohol and drugs. That’s when you hear about veterans getting in trouble. But if a veteran has a job, even if he has PTSD, he has a function. His mind and goals are set toward what needs to be done, rather than on his past experiences. He has a purpose.”

The question of purpose is definitely on Andrzejczak’s mind as the world now watches the rapidly deteriorating situation in Iraq. While the forces of the radical jihadist group Islamic State of Iraq and the Levant (ISIL) advance on Baghdad, threatening to fracture the already-fragile Iraqi state, Andrzejczak, who literally left part of himself in Iraq, looks on from South Jersey, shattered.

“It’s absolutely frustrating. My first deployment, my battalion lost about 30 guys. In my second deployment, I ended up losing my leg,” Andrzejczak said. “Looking at this stuff on the news and reading about it, what was it all for? Why did our guys have to go over there and die? You have families that are suffering, and for what when everything that we’ve done over there was basically for nothing.”

U.S. President Barack Obama announced on Thursday that he would send 300 military advisers to Iraq to assess the shifting situation while he considers other options.

“Obama is supposedly talking about going in and doing air strikes and taking these guys out. OK, that’s fine. But if we’re willing to do it now, why haven’t we already been doing this?” Andrzejczak said. “Why do we have to have our guys on the ground, fighting and losing lives, when it’s OK to go in and do air strikes now? Do I think we should go in and do air strikes? Yeah, I think we should have been doing them. But at this point, I don’t know what we would even be able to do.” 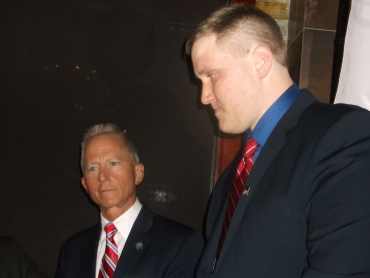