Hand injury. Brain tumor. Colorectal cancer. Aortoiliac bypass surgery. A (different) bout with cancer. These are just some of the interruptions the classic rock band Foreigner has overcome during its nearly 40 year career. Watching them slog through hit after giant hit, with perfect musicianship and a crowd filled with MILFs belting out every single “Urgent,” it’s fair to wonder when is enough enough for a rock n roller?

In his terrific book Rock ‘Til You Drop, former New York Press editor John Strausbaugh offers one extreme—rock is for, by and about the young. It’s the same extreme that used to form the critical “hope I die before I get old” leitmotif of one of the bands most guilty of wringing all life from its over-performed catalog.

In a marvelous essay on Salon entitled “When I’m 64,” Brian Doherty took the opposite view. He defends the inalienable right of over-the-hill rockers to drag their Depends out on stage as long as fans are willing to cheer. The bands he cites—The Who, the Rolling Stones, the Other Ones (Grateful Dead successor)—are still playing today, 12 years after his essay first appeared. After maximally enjoying Judas Priest despite the unthinkable retirement of Rob Halford, Mr. Doherty concludes that “Anyone who says rock ‘n’ roll is just about youth is a critical fascist.”

I get that. And I get that no rock band that’s been playing for 40 or so years is going to meet the criteria of “all original members” that purists demand. If a band has four or five guys survive 40 years, they aren’t really rockers. So reacting to the experience ought not boil down to “The new singer just isn’t the old singer.” You knew that going in. And you have to draw the line somewhere, and that’s different depending on why the band resonated with you in the first place.

I’d never dream of seeing Journey without Steve Perry or Led Zeppelin without John Bonham or The Clash without everyone or The Jimi Hendrix Experience without Jimi Hendrix. I don’t even think I can do the Replacements without Chris Mars and Bob Stinson—it’s just not what I need from them. So it’s a moving target.

Styx was pretty darn amazing. Playing without founding keyboardist and author of the band’s biggest ballads, Dennis De Young (not to mention drummer John Panozzo, who succumbed to cirrhosis in 1996), the Chicago pop group still put together a credible, highly entertaining show. The guy they got to replace Dennis De Young, Lawrence Gowan, was pretty damn good. Not only is he about the best piano player you’ll ever see in a rock group, he also brought exactly the right amount of silly theatricality, in that he could sub for the often annoying Mr. De Young without imitating him. He even danced a little bit. But not too much, you know what I mean? And he has that goofy high vibrato voice that only Dennis De Young and Freddie Mercury used to do but now, influenced by American Idol, is done by everyone, all the time.

So having most of the real Styx there, minus their most irritating member and replaced by someone who did his songs probably better than they sounded in 1980—that worked just fine for me. James Young still delivers these long speeches between each song and even dished a kind of odd, kind of touching patriotic riff. Tommy Shaw is still super short and super awesome singing what for Styx passes as their more rocking songs.

When they played “Come Sail Away,” it all came together for me. It was like a smell, how vividly it brought me back to dancing in the basement with my sister. And it really was a smell because in a nice bit of nostalgia amid today’s cigarette-free arena experience, where everyone lamely holds their iPhone up instead of a lighter, many rebellious near-seniors were lighting up joints and passing them around. For four glorious minutes, I was transported to the pilot of Freaks and Geeks and my lifelong willingness to be the one boy to stay on the dance floor when a slow song turns fast.

It was, if not magical, at least a big upside surprise. I knew I’d enjoy it, if only for the kitsch value and the memory lane stuff and the musicianship. But it was way more than that – although Styx only played for about an hour and although their voices are somewhat shot (except for Mr. Gowan, who performed a silly medley of classic rock choruses I could have done without), they really did appear to be more than phoning it in. And the sheer weight of hearing hit after hit, where even if you hate the song you know every single nuance, has its own mesmerizing effect.

In some ways, it was almost the opposite of everything enjoyable about Styx. It’s like a Journey situation – seeing Foreigner without Lou Gramm is just such a letdown. The new guy, Kelly Hansen, was … he was fine. He’s actually an accomplished vocalist with a lot of hard rock credits to his name. But it was like they put an ad in the Voice that read: “Wanted: Rock group with worldwide sales of more than 80 million records and dozens of hit singles needs generic rock singer who can hit the high notes on ‘Waiting For A Girl Like You’ and do that thing of cupping your hand to your ear in the universal gesture of ‘I can’t hear you, Newark!'”

To add insult to literal injury, Mick Jones didn’t even play the first three to four songs! The fake Lou went into this ramble about how Mick’s been ill but now he’s healthy so let’s welcome the genius of Foreigner and then Mick, profiled earlier this month as sort of a dandy in the Times’ insufferable “Sunday Routine” column, wobbles out with his George Costanza hair.

This guy wrote “Double Vision,” for Christ’s sake. What’s he doing out there? No doubt, Mick Jones still shreds like crazy on guitar but the whole Spinal Tap of it all is just impossible to ignore when they do stuff like “Star Rider” (“I stole a ride on a passing star / Not knowing where I was going How near or how far.” Yes, the rhythm guitar player Tom Gimbel played the flute.)

It’s such a shame because I really loved and respected Foreigner. This was a band totally incapable of hitting me where I live emotionally. But I’m automatically respectful of craftsmen who “crack the code,” and the ability to crank out hit songs in a few styles (hard rock, fusion, sappy ballad, power ballad, epic “story song,” even disco) is something I admire because of its rarity as much as for the product itself.

When is it time to say “no thank you”? I guess if people pay, you play. There is no shame in performing to a 40% full Prudential Center. But there is a kind of shame to beating these songs to within an inch of their lives.

On the stage, there was a gigantic digital clock pointed not just at the band but the audience, that counted down from 1:05, meaning we knew when Foreigner began that they would play for exactly 65 minutes. And that’s what they did.

I remember my brother, age 15 in 1978, telling my dad that “Hot Blooded” was the best song ever recorded. And then when the band “changed direction” and put out 4, I remember my friend’s brother Steve telling me and my friend that “Urgent” wasn’t about a failed love affair as we assumed, but was actually about a drug connection. Our eyes were like saucers at the majesty of rock and the mystery of roll.

So what’s the answer? When should a band pack it in? It’s simple. When its audience can no longer close its eyes and be transported to that special place you were when you first heard the song. Styx cleared that bar. For Foreigner, at least on Thursday night in New Jersey, it didn’t feel like the first time. 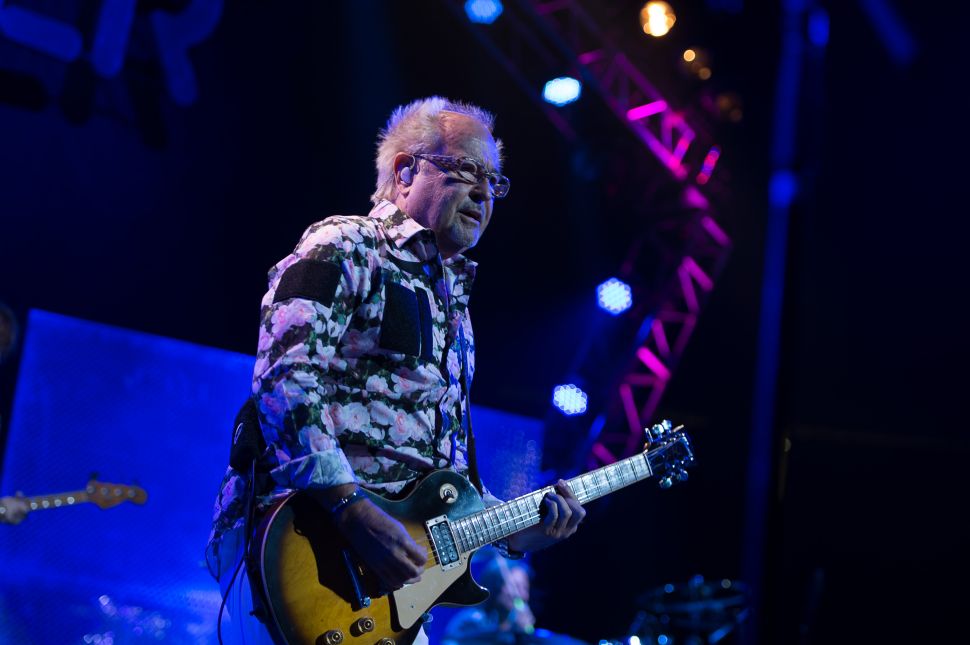