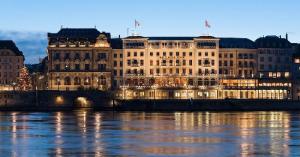 Since it was founded in the 17th century, Basel’s Rhine-side luxury hotel Les Trois Rois (The Three Kings) has seen its share of nobility. Napoleon stayed there. So did Queen Elizabeth II, Thomas Mann and Picasso. Last week, however, in the midst of the party scene that has come to surround the annual Art Basel fair, it saw something that, for this stately building, is considerably more exotic: a bouncer.

At 12:30 a.m. on Wednesday, the well-known art dealer Gavin Brown, in the lobby of Les Trois Rois and surrounded by a screaming, mewling mess of long dresses and colorful suits, was one of those who went unrecognized by the bouncer. Dozens of well-heeled patrons of the arts tried in vain to get into what had, almost overnight, become the hottest club in Basel. The only people to gain entry after midnight were those Larry Gagosian personally came by to vouch for and carry past the doorman. Mr. Gagosian had to leave his perch at the bar, which came complete with sparkly arm candy, several times.

All of this fuss just to join an over-packed balcony and pay 50 francs for a glass of champagne, watch gorgeous women with thick accents cling to the arms of megacollectors, and overhear chest-thumping over sales.

Doesn’t it seem odd that this stately old inn on the water would become a hopping nightclub, complete with fistfights, lines, bottles service and drinking until the wee hours?

“I have never seen this before,” said Michael Kampmann, the head bartender of The Three Kings, when we caught up with him the next day (things were calmer by then, everyone had left for Athens). “We have never, ever needed a bouncer at the door. I guess people were celebrating.”

Yes, only in mind-blowing boom times would a Swiss chalet with cocktails pricier than plane tickets work this well. There’s nothing like celebrating buying expensive things by buying more expensive things. The Three Kings bar has always been a place for power players to mingle quietly, but it’s never hosted a rager. It brought to mind the relatively recent annexation of the Bemelman’s Bar at the Carlyle—it’s one of the classiest places in town, but in recent years, if there’s an opening at Gagosian or Adam Lindemann’s gallery Venus Over Manhattan across the street at 980 Madison, the art world will drag their wine-tipsy selves over and drink rowdily for hours.

But, in Basel, perhaps there’s simply nowhere else to drink after dinner. There’s always the Kunsthalle, but talk around town said the kids have come up from behind, and that it’s more packed and loud and silly than usual. (Or, as dealer Lorcan O’Neill told The Art Newspaper, “You can almost smell the pheromones in the Kunsthalle bar after midnight.”)

And of the pop-up clubs from last year, none of them showed up. There was no Le Baron and no Kanye West this year. French dealer Emmanuel Perrotin hosted a bash on the docked party boat Das Schiff, where Le Baron usually sets up shop, but even the usually peppy Mr. Perrotin told us that it was less hopping than he would like. “Maybe try to go to the dance floor?” he suggested. We did, and then left soon after.

What about Silencio, the Paris club opened and designed by David Lynch? They had a rollicking set-up at Art Basel 2013.

“We won’t be in Basel this year,” said Coralie Gaultier, the nightclub’s spokesperson, when we visited the club in Paris last week.

And needless to say, despite some rumors, Kanye West did not make an appearance at Art Basel 2014— last year, he threatened to upstage the entire fair with a last-minute decision to hold the world premiere of his monumental album, Yeezus, here in conjunction with the fair.

Thursday night began auspiciously: Tolga Albayrak, a nightlife lifer who’s been with Le Baron since day one, was throwing a party at Hinterhof, a giant club outside of town. When we arrived, there were rickety iron stairs that led to different levels, long skinny corridors plastered with vintage soccer posters, and a tiny room where a girl with a half-shaved head played slow, heavy dub remixes of Rihanna songs. Promising start! And then we were led to a giant warehouse, where the young crowd was indeed yelling, carrying on, doing drugs, slamming beers and making out. It was more Berlin than Basel.

There behind the DJ booth, shimmying with the normal people, was Art Basel Director Marc Spiegler who, seemingly as part of his job, has to be everywhere. From the looks of it, he appeared relieved to be out of The Three Kings, and onto the dancefloor.