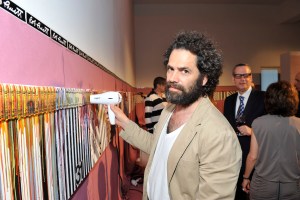 In December 1993, a young artist opened a solo show at the year-old David Zwirner Gallery in Soho. There were offset prints, sculptures of books, a piece involving a mirror and, in the back room, a photograph of the artist’s apartment on 97th Street.

That artist was Gavin Brown.

Last year, Milwaukee’s Green Gallery convinced Mr. Brown, who these days is far better known for his gallery, Gavin Brown’s Enterprise, than his art making, to do a show. It took place in January, and on the evening of June 25 Mr. Brown will show that very same artwork, a new two-channel video projection, in his gallery on Greenwich Street.

“In the end I was pleased with the results” at Green Gallery, Mr. Brown told Gallerist this afternoon. “I thought, ‘If I were invited to show elsewhere, where would I most like to show?’” His own space, of course. “It seemed obvious.”

The U.K.-born Mr. Brown was an artist before he became a dealer. He attended Newcastle Polytechnic and Chelsea College of Arts before moving to New York in 1988 to continue his studies at the Whitney Museum’s Independent Study Program. He began organizing exhibitions in the early ‘90s, including one for 303 Gallery in 1991, and opened his first gallery in Soho in 1994, the same year his own Zwirner show closed.

Earlier this year, in an interview in Art Review magazine, Tom Eccles, executive director of Bard College’s Center for Curatorial Studies, asked Mr. Brown why he’d stopped making art. “I stopped because I didn’t feel compelled to make,” Mr. Brown replied. “Also, I didn’t trust my own voice. Since then I have come to miss that conversation one has with oneself. The artist, in my mind, is the ultimate human being. The human being we were made to be.”

As it turns out, he’s been quietly making for some time. “I’ve been doing things here and there,” he told Gallerist, somewhat vaguely, adding, “This is the first time I’ve been happy enough to put something out there.”