The pranksters posed for the scene, which shows one man — axe-in-hand —  walking away from another lying face down on the sidewalk, when they saw the Google Street View car coming down the street.

“It was in the spur of the moment,” Dan Thompson, the garage manager, told The Independent. “It seemed like the obvious thing to do so I threw myself on the ground and Gary grabbed a pick-axe handle from the garage.”

After Google Street Viewers reported the scene, which can still be seen here, officers tracked the location and found Mr. Thompson, who played the dead man, alive and well.

Mr. Thompson and his fellow prankster Gary Kerr, hardly remembered the 2012 gag when the officers came knocking but claimed,“We only had about 20 seconds – it was all we could think of.”

Lucky for them, the officers had a sense of humor .

“They thought it was a really good laugh and in five minutes they were gone,” Mr. Thompson added. 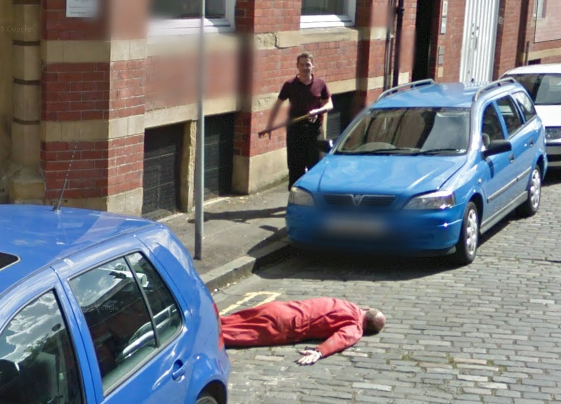