Titled after the classic Atari 2600 open-world video game “Adventure”, last night’s episode of Halt and Catch Fire was anything but. The season is about half way through AMC’s initial 10-episode order but still feels sophomoric in its progress and themes since the pilot.  The show finally has an explanation for its characters’ self destructive, impulsive and sometimes childish behavior: They all have deeply-seeded daddy issues. This would come as no surprise to anyone who has invested their time in previous hour-long serials like Lost or Mad Men, but the not-so-subtle rollout is more eye-rolling than revelatory.

The paternal arcs played out in this episode came as neither a payoff nor a reveal for those following since the pilot. We knew Joe MacMillan’s father is an IBM employee, and that fact plays into both his complex hatred and need to defy the behemoth company. The clues and cookie crumbs dropped throughout the first half of the season were not enough to leave me curious or invest in the mystery of Macmillan’s troubled past. Instead of a character that struggles when compromising his morals, or a character that surprises you with empathy from time to time, we get Joe Macmillan: a 1-dimensional anti-hero whose actions are becoming more and more predictable as the season progresses.

What have we seen from Joe so far? He has scars. He likes to break things. He’s narcissistic and violent.  The combination of character flaws in Macmillan as well as the textbook behavior of Howe and Clarke seemed to have trapped the characters into a routine of bad judgment that must be explored in EVERY episode. You can expect when you tune in each week that Joe will manipulate a situation with a potential client or business interest, Howe will rebel against someone in the company and Clarke will blur the lines between his work and family life while jeopardizing the stability of both. With all these same tropes playing out week after week, the revelatory payoff of each character’s paternal woes doesn’t even come close to answering the real questions posed by its viewers. “Why do I hate all the main characters?” or “Why do I care how this story plays out?”

There is one character that keeps me coming back every week and that’s Donna Clarke, the beautiful and cultured genius wife of the increasingly pathetic Gordon. While the last two episodes centered around her innovations and willingness to help her husband (and Cardiff Electric), this time subtle hints are given as to where her character may be heading. We are treated to a painfully flirtatious late-night phone call between Donna and her ex-flame/boss that could signal trouble for the Clarke family. As we learned from the fallout of last week’s episode, Donna is quoted in the Wall Street Quarterly article, another sign that her engineering prowess will play an integral part of the show’s overall arc of building a revolutionary machine. So far though, her career is still in jeopardy as she struggles with her role at Texas Instruments and a complex relationship with her boss. With Gordon continuing to disappoint her with his inconsistency and apathy towards their family life, one could see the justification for Donna’s flirtation. Will the changing rapport with her boss affect her limited role with the company? Or will it eventually push her towards permanently joining Cardiff Electric? Whatever the career outcome may be, expect her relationship with her husband to change dramatically.

Gordon Clarke continues to stumble through this season as the character that doesn’t seem to grow or learn from his experiences.  As with the previous episodes, this one begins with a smile on Clarke’s face as we see him successfully boot their emerging PC using Howe’s BIOS code. On queue, MacMillan immediately discontinues his celebration by reminding Clarke how far they are from their goal. It’s more of the same: Clarke celebrated a small developmental victory and MacMillan interrupted with his grandeur vision and more seemingly impossible demands. With a reminder that the new PC must dramatically reduce it’s weight, Clarke conjures up a plan to incorporate an LCD screen into their design after he witnesses the smaller and lightweight applications of the technology through a product that his father-in law is now selling in their electronics catalog. In their initial interactions, Clarke is generally indifferent towards his wife’s father but realizes he must engage him in order to form a relationship with the Japanese-based LCD company Kuzoku. Successful in getting the meeting as well as temporarily impressing MacMillan, Clarke is again and immediately out of his element as they both sit with the Japanese Businessmen to make a deal. While MacMillan closes and the deal as he usually does, Clarke drinks far too much and let’s his insecurities and emotions get the better of him. Unaware of how to navigate the geopolitical decorum and tradition when dealing with a foreign company, he slurs and slanders on about his stepfather to Kuzoku’s developer and blows the deal entirely.

Early on in this episode we see MacMillan save his managerial rival Bosworth in a meeting with potential vendors by providing a showy pitch about that proverbial “third shelf” where this magical PC will one day sit and make all those involved super-rich. Seemingly successful in his presentation, MacMillan is riding high until he learns that his father is in town. Now from what we know they have a strained relationship that centers around MacMillan leaving his job at IBM, a job we learn that his father gave to him. What did we learn about their relationship from this episode? Almost nothing. MacMillan Jr. avoids MacMillan Sr. the entire episode and only communicates through Cameron Howe, who happens to encounter MacMillan Sr. We learn a few things in their scene together: Howe’s father died in Vietnam and IBM supposedly thinks Howe is the next *insert famous female programmer here*.  Not much to go on in deciphering the motivations behind Howe’s actions and methods, but I guess it’s a good start.  While I wasn’t pleased with how that reveal went down for Howe, I was satisfied with her character’s individual progress as the writers have given her some more like-minded personalities to play with. Returning from a small vacation in Cincinnati (Was Cincinnati nice in 1983? Because it’s a hell hole now,) Howe comes back to work rested and showered but finds that an entire software department has spawned and she must fall in line with the team. Battling with Macmillan about this new arrangement, she eventually gets her way after citing “Brooks Law,” a term coined by Fred Brooks in his book “The Mythical Man-Month”. The law states that adding programmers to a project that is in its later stages will only make it longer. Howe proposes that they could finish the project in less time with half the cost and then fires most of the coding team, keeping those she knows she’ll play well with.

One thing I appreciate about Halt and Catch Fire is the attempt at the twist at the end of every episode. There was the “Macmillan’s dad works at IBM?!” the “MacMillan is gay?!” and from last week, “MacMillan actually set all this up and lied to everybody?!” This week’s reveal was far more understated and much more digestible. When the smoke is cleared and the man-made crisis resolved, MacMillan is ready to embarrass Clarke in front of his development team by claiming he saved the deal that was ruined by Clarke’s bad judgment. Instead, MacMillan learns that the deal was fixed before his practiced speech about respect and honor to the Japanese. He learns that Clarke humbled himself to his father-in-law and begged for him to fix the deal.  This may be the one advantage Clarke has over MacMillan, and will play to the how the writer’s choose to wrap up this season’s “father” arc. At the end of the day MacMillan cannot confront his personal problems or his past and would rather brush it under the table in favor of focusing on his ambitious project. This could be a problem not only for MacMillan but the show in general. These short bursts of revelations and the crawling development of the characters leaves very little to want more from. Yes, I’m intrigued to see this new machine and I am rooting for the characters (mainly Donna Clarke) to succeed, but what will motivate me to return to the show next season after these hurdles are crossed and all we are left with are these characters we cannot relate to or care about? 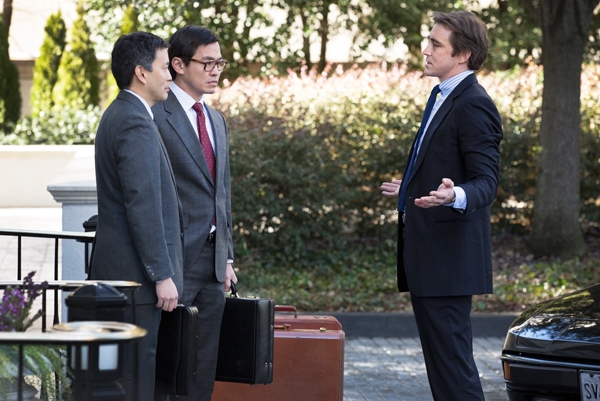