For me, the words conjure up actual camping on an island by the small lake in Michigan where I grew up. On summer afternoons, we used to row over to it in a leaky rowboat, with a sack of hotdogs, canned beans, pancake batter, a rusty frying pan, a couple sleeping bags and pup tent. There was the gathering of kindling, the frustrating attempt to make fire with damp wood. Finally, as we abandoned all hope, the rewarding smell of smoke. Peeing in the outdoors at twilight. Snuggling in sleeping bags by flashlight, telling stories about the maniac who escaped from the asylum one night and slaughtered all the campers.

I know summer camp means something a little different to New Yorkers.

It is the place in Pennsylvania or Maine or Vermont where you spent seven weeks every year until you, with cabins and songs and bunks. Now it’s the place where, when schools stop doing their job, you can ship off little Max and Sophie for your own seven weeks of child-free beach and city time, interrupted by a parent visiting day and trips to the post office to mail care packages.

In evolution of the human child, working our way inexorably toward the Wall-E era, camp can now also mean a place that has little or nothing to do with nature and the outdoors, let alone “camp-fires” or “camp-ing” with tents.

I speak now of the “techcamp” or computer camp, a place where American kids can be transformed into the real-life Wall-E worm-human, all summer long. There are hundreds of them sprouting around the country. For instance, iD Tech, which claims to be the “#1” tech camp outfit, has sessions at NYU along with 80 institutions around the nation.

According to their website: “At NYU, we offer two distinct programs: iD Tech Camps, and iD Programming Academy. We guarantee a maximum of 8 students per instructor for personalized learning, and use the best brand name products from industry leaders like Adobe®, Apple®, Autodesk®, Google, and Microsoft®. Innovative courses. Your pace. Your internalDrive.”

I don’t blame iD-Tech’s founding family for spotting a trend and capitalizing on it. The cost of tuition varies depending on the course, location, and camp option that you choose. Basic Day Camp ranges from $799-$1029 per weeklong course. There are additional costs for program add-ons including lunch, overnight camp, and weekend stays.

Two impulses are behind the growing popularity of shipping kids off to sit in front of computer screens for their summer weeks. On the kids’ side, it’s what they would rather do. Primo, my first-born, is, like every other young male American teen, hooked on video games. Hale and hearty enough to bike, run and swim outside, he’d rather not be outdoors. When he is not personally at the X-Box controls, he prefers to watch YouTube videos of other kids playing video games and generally doesn’t indulge in any other form of entertainment.

Computer camp? If he had the funds, he’d pay me to send him.

On the parental side, the preference for bathing offspring in the glow of a desktop screen rather than sunshine during summer is probably rooted in the meme that American kids are dumber, fatter, and spending fewer hours in school than Chinese and Indian kids.

Freaked out by the awesome discipline of the Tiger mothers and their task-mastering offspring, American parents of a certain high-competitive ilk, panic and plop their kids into math, engineering and computer “camps” for the sweltering months. While their beta peers loll in parks, play ball and waste time, little alpha superachievers are shuttled off to gulags of computer camps, where under fluorescent light, they can work on early-stage, mouse-induced carpal tunnel syndrome.

Tech and computer camps promise parents that kids will not waste their summer-time mindlessly lolling in the grass, singing campfire songs, whacking a ball around. They will learn something about coding and math, something that will propel them up the ladder of global success.

America. Falling behind. Well, not my kid!

Some of that fear may be true. Our kids are fat. But Chinese kids are catching up in the obesity department as their parents grab the industrialized nation brass ring of packaged food and gas-guzzling transport.

It turns out American kids are NOT spending less time in school, DOE Sec. Arne Duncan’s fears notwithstanding. According to an article published by the Center for Public Education, data from the OECD and the World Data on Education, students in China and India are not required to spend more time in school than most U.S. students. The Center’s researchers found that most states require between 175 and 180 days of school and/or between 900 and 1,000 hours of instructional time per year, depending on the grade level. That compares favorably with instructional time in China and India in the five states that enroll a significant portion of U.S. students—California, Florida, New York, Texas, and Massachusetts.

Many countries also score higher than the USA on the Program for International Student Assessment (PISA) tests. Finland, South Korea, and Singapore usually come out on top.

But at what cost in creativity are these stellar scores achieved? Indian-American tech entrepreneur Vivek Wadhwa, writing in Businessweek a few years ago, observed: “America has an inferiority complex about its education system. You hear the sirens every year, we start blaming our K-12 teachers for not teaching enough mathematics and science; we begin worrying about the millions of engineers and scientists China and India graduate.”

Children in China and India are shamed and terrified into rote memorization of extremely advanced subjects from a young age. Thus you meet 5 year olds who can play a perfect Chopin sonata without sheet music, and 10-year-olds working out college level physics problems.

That’s great for getting into the best schools. But there might be a reason why there is no Apple in China, no Google sprouting in India. Some American-style goofing off may give children the seeds for a different way of dealing with problems. As Mr. Wadhwa wrote: “The independence and social skills American children develop give them a huge advantage when they join the workforce. They learn to experiment, challenge norms, and take risks. They can think for themselves, and they can innovate. This is why America remains the world leader in innovation.”

Summers in the country for me meant going months without shoes. When I got tired of running around in the woods, I retired indoors, where I encountered an infinity of boredoms, hot, unsupervised, long afternoons, staring at the sky, that I managed to survive with marathons of reading. Boredom drove me to everything from Bram Stoker to Richard Wright to feminist anthologies and encyclopedias on my parents’ 1970s bookshelves. I became a reader then.
There is a type of time-wasting, that, I would argue, is healthy, if not downright necessary, for well-rounded kids. It starts on grass, in fields and streams, around trees and animals.

Richard Louv, author of the 2005 bestseller Last Child in the Woods, coined the phrase “nature deficit disorder” to describe a sad phenomenon, the separation of American children from nature. Some time in the last several decades, we have moved our kids en masse indoors. Not just city folks – even people who live in houses with lawns and fields. The indoor-ization of the American kid is a huge change, and like the changes wrought by the digital revolution, we don’t know its long-term effects.

I agree with Louv that the child-nature separation doesn’t bode well. “Americans around my age, baby boomers or older, enjoyed a kind of free, natural play that seems, in the era of kid pagers, instant messaging, and Nintendo, like a quaint artifact,” Louv wrote. “Within the space of a few decades, the way children understand and experience nature has changed radically. The polarity of the relationship has reversed. Today, kids are aware of the global threats to the environment—but their physical contact, their intimacy with nature, is fading. That’s exactly the opposite of how it was when I was a child.”

Like the coming mass extinctions in our Anthropocene era, the separation of children from nature is a phenomenon we should fight with our last breaths. We will grieve it deeply when it is gone. 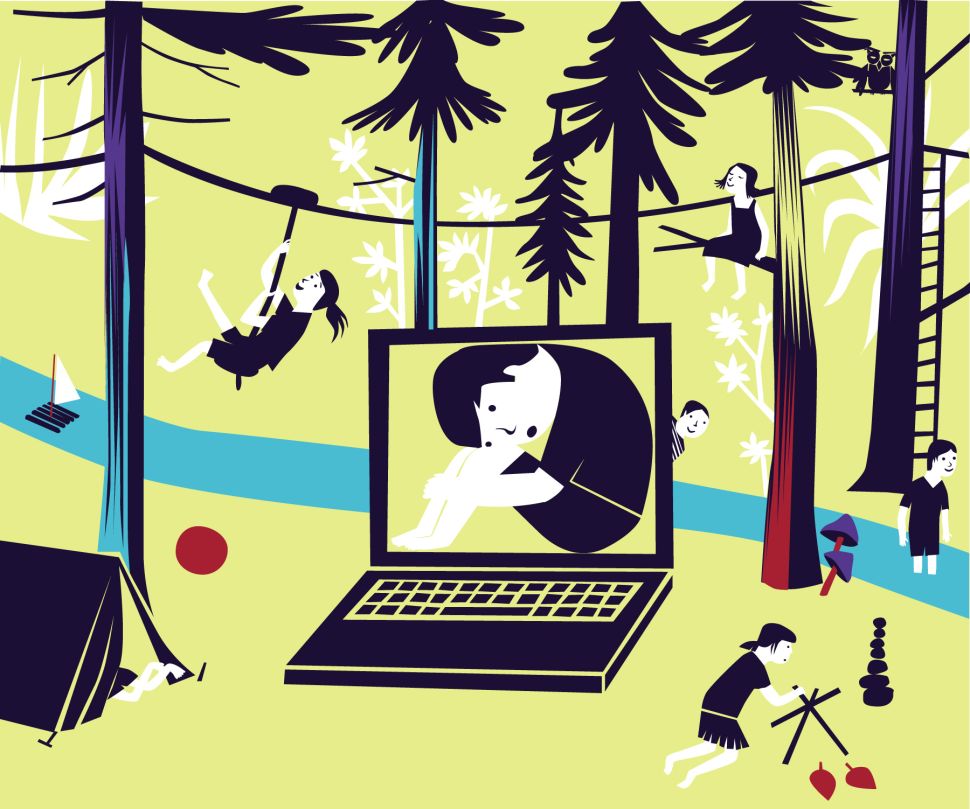 Filed Under: Business, the bombshell