A few weeks ago, before World Cup fever had gripped America — or, more precisely, before ponderous pieces about why America was immune to World Cup Fever gripped America — President Obama went on NPR  to clarify some of the remarks he made during his major foreign policy speech at West Point.

Perhaps it was his public radio hot interlocutor Steve Inskeep’s background as a sportscaster or perhaps it was Obama’s desire to explain our non-intervention in Syria in ways the common man might not find insane, but he relied, as he often does, on sports metaphors to do the job. In particular, he swung for the fences on baseball metaphors. He also called an audible and threw in a bunch of football metaphors too.

Obama spoke of blocking and tackling in foreign policy, of advancing the ball on human rights, national security, energy independence, both gridiron football metaphors. He wanted to put the ball in play, a pan-sport term. Then he closed big: “Every once in a while, a pitch is going to come right over home plate that you can knock out for a home run. But you don’t swing at every pitch.”

Metaphors in politics are, of course, nothing new. “At the core of political communication,” writes Jeffery Scott Mio in Metaphor and Politics, “is the ability of the politician to use metaphor and symbols that awaken latent tendencies among the masses.“ So it makes sense for Obama — or any other US politician — to stick with America’s favorite sports. According to a recent Harris poll and national duh, it’s clearly football. If they had to choose just one, 46% of Americans  consider football — both professional and college — to be their favorite sport. Baseball clocks in at 14%  and soccer — what the rest of the world calls football — at a measly 2%. Clearly, explaining the partisan criticism of Kerry’s botched mideast peace deal as “Thursday morning tippy tappy” would not be an effective means of communication.

Still, as we’re inundated with think-pieces on how a nation’s style of play reflects their national character I can’t help but wonder what or how might the United States foreign and domestic policy shift if, instead of relying on football and baseball, perhaps the President thought of the field of international events as a soccer pitch. Granted, there aren’t a lot of soccer metaphors but what does he pay his speech writers for anyway?

Football and baseball are both heavily schematic games. It isn’t just television — though it doesn’t help — that gives football its frustrating start-stop tempo. There are downs to achieve, play clocks to mind, trotting back to the line of scrimmage. According to a WSJ study, the ball is, to borrow an Obama metaphor, in play for only 11 minutes per broadcast. Baseball’s a little better but even in baseball, what one might call the hors de combat bureaucratic architecture is quite heavy. America’s favorite sports are characterized by stillness punctuated by brief spurts of action.

And so it might be with our foreign policy. No one can seriously argue that the metaphors we use don’t affect how we think of the issue at hand. “Each metaphor intensifies selected perceptions and ignores others,” wrote political scientist Murray Edelman in Politics as Symbolic Action: Mass Arousal and Quiescence. Also, Mass Arousal, heh!

If one thinks of the US foreign policy vis-a-vis the invasion of Iraq or Afghanistan, or the non-invasion of Syria, or the currently intractable situation between Israel and Palestine, or the Arab Spring or this mishegoss in Ukraine as mere plays, a set of X’s and O’s moving around board before the referee calls a halt, we go to commercial break and then return to well ordered field, it’s no wonder the country seems to often back-footed and bewildered.

As opposed to football and baseball, on the other hand, soccer is a fluid game. One action seamlessly and endlessly blends with the next. In other words, the ball is always in play. Also, unlike in baseball or football, anyone can score at any time. Though defense and offense do exist — in the form of backfield, midfield and forward players — they are not, as in football, two teams of adversarial autonomous men but a team unified. All men are on the field at once. It’s an ever-shifting butterfly effect of a sport. It’s a long range, context-driven and historically minded sport.

So, as the World Cup gets ever more full, one wonders what might a US policy look like through soccer metaphors? What if international events aren’t thought of as possessions, or quarters or innings, if each decision — whether to invade a country or stand by idly as one devolves into civil war — isn’t imagined as a solitary ball whizzing over the plate setting into motion a discreet highly-choreographed chain of events with a discreet end but rather as one moment among many in a dynamic fluid environment? What if Americans saw the world as a soccer field as opposed to a gridiron or a diamond?

Alas since the purpose of metaphor is to communicate, this will never happen, at least in political speech, until soccer becomes more popular. And soccer will never become popular until the United States begins to win at it. This, more than national boosterism or knee-jerk patriotism, is the real promise of a United States victory at the World Cup and it is a worthy GOOOOOOOOOOOOL indeed. 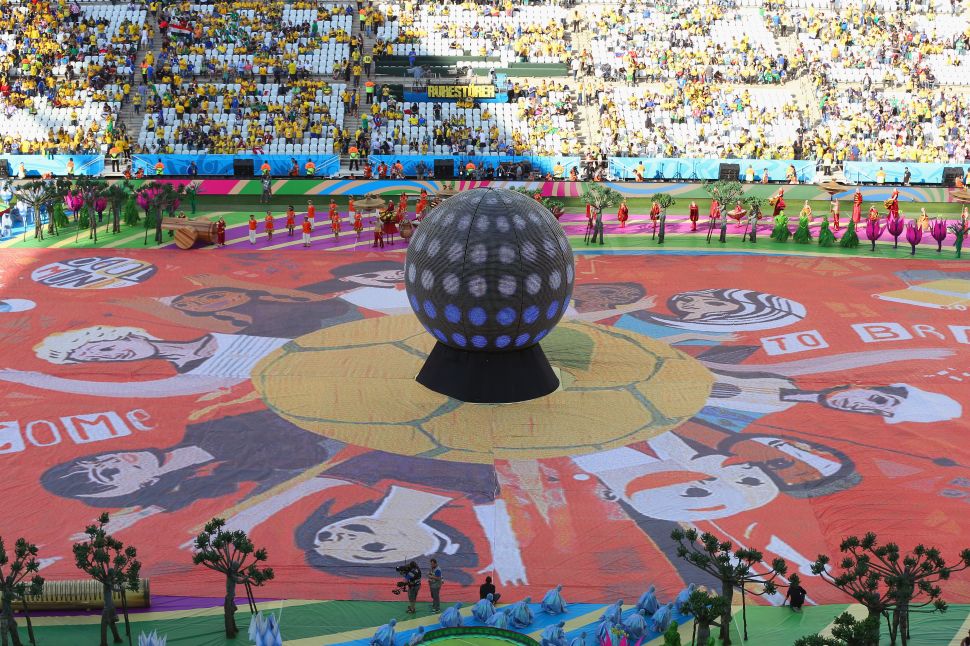