JERSEY CITY –  Hudson County Freeholder Third District candidate Gerard “Gerry” Balmir Jr. felt that his effort to unseat incumbent Jeff Dublin was going well both through his own efforts and with the help of his political friends.

“I do feel the strength of being on the Hudson County Democratic Organization (HCDO) line, but I haven’t taken that for granted,” said Balmir, 38, who has the support of Jersey City Mayor Steve Fulop. “We’ve done grassroots organizing, worked with the block associations and put a coalition of people together who felt that they’ve been neglected over the years. I’m here to be an advocate for the community, and Mayor Fulop and the people I have are a team of hard workers.”

“The Laborers are supportive, the Carpenters are supportive, SEIU 32BJ is supportive,” Balmir, who is the director of government and community relations for the Laborers, which are headed by prominent labor union leader Ray Pocino. “They’re all here today helping me out. Right now, I’m very optimistic as to where turnout is going to be.”

“Jeff Dublin has his own base, but Gerry Balmir is a true fighter,” said Fulop operative Jason Solowsky, who was by Balmir’s side in front of a Pacific Avenue polling station on Tuesday in the Greenville section of Jersey City. “With the collaboration with Steve Fulop, we’re going to pull it off. We’re rocking and rolling.” 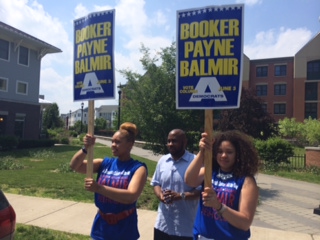