“What’s harder than a one-man show?” griped actor Michael Urie, who has gone on tour with his off-Broadway hit, Buyer & Cellar. “How about pitching in a major league stadium!” In Chicago, the Ugly Betty star was asked to throw the first pitch at a Cubs game. “It was a complete and surprising thrill,” he gushed afterward.

As for the reaction across America to the snarky humor in the show? “Audiences are very different in New York than Chicago, that’s for sure,” he sighed. “But all are enjoying the play, which I’m still having a ball performing,” he said with a wink.

Back in New York, Shindigger caught up with Yankees manager Joe Girardi at BTIG’s 12th Annual Commissions for Charity Day, an event that attracted old teammates Mariano Rivera, Jorge Posada and Mark Teixeira to raise money for charity. We asked Mr. Girardi if he was superstitious as a player.

“I was more a creature of habit. I eat the same thing every morning: egg whites and ham with dry wheat toast,” said the manager. Reggie Jackson, also on-site, liked his routines as well. “I wore long-sleeve shirts, a certain T-shirt,” recalled “Mr. October,” before proceeding to a high-level analysis of the current state of the sport we pretended to follow.

Later, Shindigger joined footballer Victor Cruz, looking suave in a fitted Calvin Klein suit (yes, we were caught looking) as he took sanctuary in a catering lounge after double-teaming the phones on the trading floor with model Petra Nemcova.

“I’m not really superstitious,” he confessed as we guzzled a juice blend we wished was red wine. (Where’s infamous imbiber Mickey Mantle when we need him?) “I do have a routine I stick to. Otherwise, I feel a bit off,” he conceded. “And I do have my dancing,” he said laughing and previewing some of his salsa shakes. Moving on to baseball, Mr. Cruz disclosed his passion for the Evil Empire:

“Could you ever be a Red Sox fan?” Shindigger asked the UMass alum, feeling we had already whiffed.

“That’s blasphemy!” he retorted, wide-eyed. “Even in school, I was Yankees all the way through.”

Having maxed out on stocks and chaos, Shindigger spoke with Eli Manning, undoubtedly the most popular athlete in the room and also a Yankees devotee.

“It’s kind of controlled chaos in here!” he marveled. “I don’t know what’s going on or what I’m selling, but I know it’s all going to great charities.” Shindigger threw the quarterback a curveball about Michael Sam and the NFL welcoming its first openly gay player.

“I’m excited for Michael and all the players that were drafted,” he replied judiciously. “I look at people as football players and as people, and we’re going have to play St. Louis this year, and he’s gonna be on the opposing team. We have to block him, and hopefully he doesn’t get any sacks.”

As for Mr. Jeter himself, Shindigger had never set foot in the Sheraton New York Times Square Hotel, but we gladly did so on June 1 to see him and his Turn 2 Foundation raise more than $1 million for Youth Programs. (Full disclosure: the private Robin Thicke concert was a major pull.)

“This is something I really look forward to all year,” Mr. Jeter said. “It helps make so much of what we do possible. The incredible outpouring of support we received will make a profound positive impact on the lives of the young people our programs serve, and we are truly appreciative of everyone who stood behind us tonight.”

These guys need a Red Sox game, we thought. It’s getting way too nice around here. ν 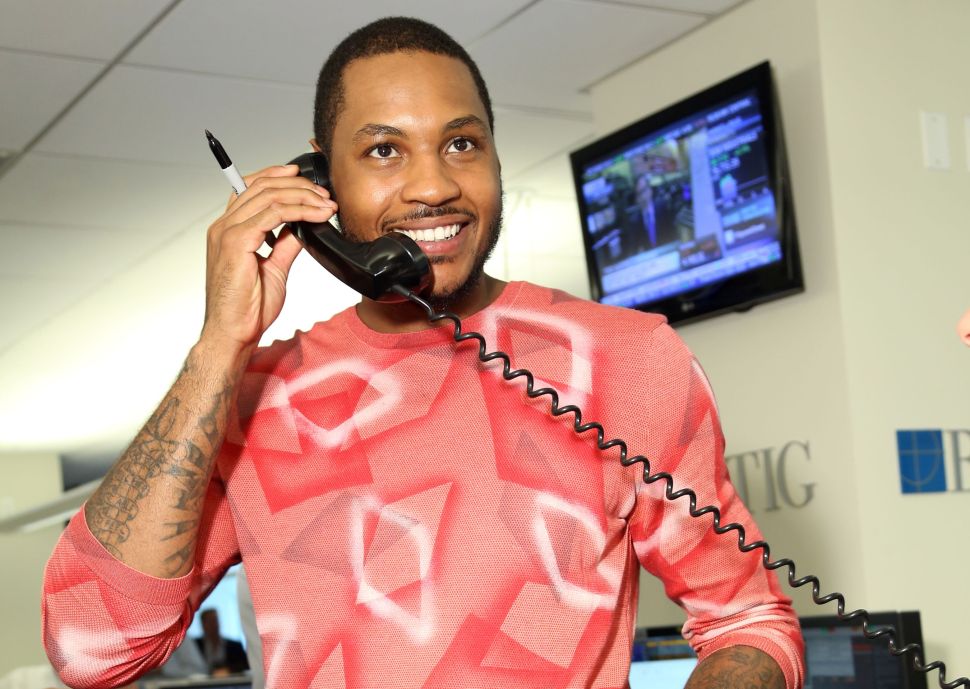