Johnny Utah’s self-proclaimed title as the “Best Country Bar” seems like a load of non-mechanical bull.

As of Friday, six former Johnny Utah’s bartenders are suing the establishment for persistent sexual harassment and degradation, according to the Daily News.

The suit characterizes the Midtown bar as “a hyper-sexualized work environment that increases the defendants profits by exploiting, degrading and humiliating its female employees.”

The ex-Johnny Utah’s bartender and “Daisy Duke girls” were subjected to daily degradation that included managers forcing them to participate in cranberry wrestling matches, lap dances, topless bull-riding and co-worker make-outs. The women were also made to dress provocatively, forced to remove engagement or wedding rings in order to seem “available.”

If the women failed to comply, male managers would call them “ugly” or “stupid,” notes the suit.

They were also subjected to verbal and physical abuse at the hands of male patrons, which they had to endure to be “team players.”

The Observer went to investigate this pleasant-seeming environment at Johnny Utah’s firsthand.

When we attempted to speak with a server clad in denim cutoffs and a knotted plaid shirt, she said she was working there only until she can return home to Ireland. Mid-sentence, a manager barked at the server ordering her not to speak.

But from this poster, it seems like old habits die hard. But hey, if miscegenation and degradation is your thing, Johnny Utah’s wants you: 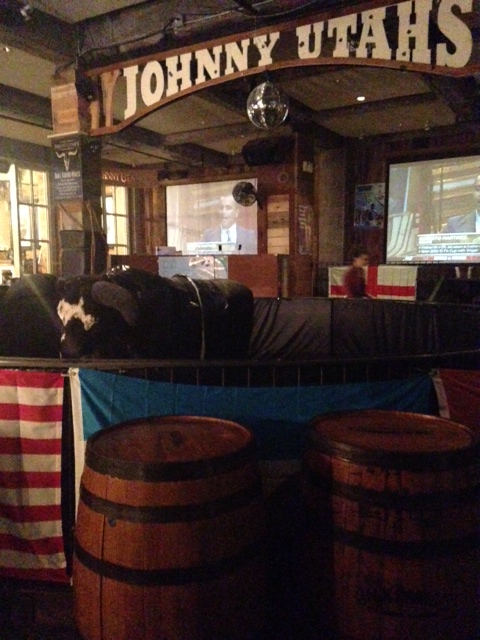