At a press conference announcing the foundation of his National Network Against Gun Violence–a group made up of legislators from across the United States seeking to fight firearm-related crimes–Mr. Williams criticized the media for suggesting a connection between the passage of the police-regulating Community Safety Act and the outburst of bullets that left four people dead and 21 wounded citywide this past weekend. The pol pointed to statistics showing that gun crime ebbs and swells independent of police policy.

“There is no correlation between the amount of stops and the number of shootings,” Mr. Williams argued. “I ask you to stop trying to connect those dots.”

Mr. Williams was among those who pushed hard to pass the 2013 legislation that installed an inspector general atop the NYPD and made it easier for citizens to sue cops. The councilman went on to argue that, even if stop-and-frisk was a successful approach to combating crime, it would still be a violation of basic civil rights and would put an unfair burden on communities of color.

“Even if it did work, we as a society have decided that the constitution does mean something, and we don’t want to live in a police state,” the elected said. “Do not ask black and brown people to live with something you would not ask of any other community.”

Mr. Williams announced shortly before making his remarks that two people had been shot in Brooklyn since the press conference had begun.

“I don’t even know what to say, it’s ridiculous,” the councilman muttered.

Mr. Williams and his allies in the NNGAV envision the new group as a way for lawmakers nationwide to share and compare proven policies for reducing shootings.

“The goal of the National Network Against Gun Violence is to create a repository where people can communicate their best efforts,” said Mr. Williams, adding that he still does respect the Second Amendment. “Not ones that remove the constitutional right to bear arms, but that allows people the right to live their community.”

At least one fellow councilman, however, disagrees with Mr. Williams. In a statement today, Councilman Eric Ulrich, a Queens Republican, said a decrease in stop-and-frisks is directly tied to a recent spate of shootings.

“New Yorkers deserve to live in a safe city. The rash of gun violence this weekend, leaving three dead and many others wounded, should serve as a wake up call to Mayor de Blasio and his administration,” Mr. Ulrich said. “These shootings contradict two decades of crime reduction in our city and make the strongest case for bringing back stop, question and frisk.” 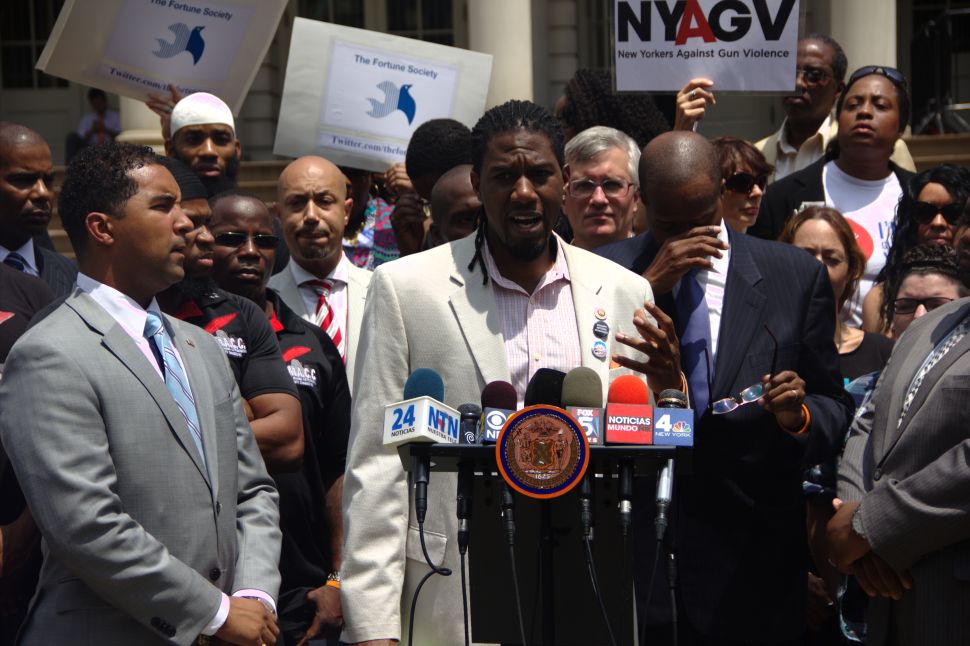