Even Kartoon Kim’s weave looks better than yours. (Screengrab via Instagram)

The Legend of Zelda. Super Mario Brothers. Call of Duty.

These are some of the most popular and most successful video games of all time, the leaders in their field.

Or at least, they were — until Kim Kardashian updated her Instagram this afternoon with a photo and caption that imply she’s working on a video game of her very own.

The game’s Instagram teaser has garnered 287,000 Instagram likes so far, which, while it isn’t close to Kim’s record 2.92 million for a snap of her recent wedding, is pretty formidable for a vague game teaser. So what could the game possibly be about? Let’s speculate.

The photo shows a cartoon version of Kimmy standing on a red carpet in a white dress (it’s probably couture), hands on her hips and that trademark squinty-sexy look on her face. “KIM KARDASHIAN Hollywood,” the photo reads. Her name also appears on the backdrop behind the red carpet, and the famous Hollywood sign in the background has been replaced with KARDASHIAN.

It seems like Ms. Kardashian is alone in this drawing at first glance. She’s not. A mass of proletarians stands behind a barricade, beckoning her from afar. But she can’t make out their faces, and neither can we. Who would want to, anyway, when the contouring on Kartoon Kim’s visage is so superb?

“Sneak peek from my upcoming project!” Ms. Kardashian gushes in the photo caption. “Super excited about this! #KimKardashianGame.”

So what could the game, KIM KARDASHIAN Hollywood, possibly be about? Red carpet posing? High-profile marriage proposals? Sibling rivalry? How to land a Vogue cover? How to “take” the Hamptons?

Only time will tell. In the meantime, we’ll just have to re-watch Kimmy’s “how to take a selfie” news brief for the 900th time.

Sneak peek from my upcoming project! Super excited about this! #KimKardashianGame 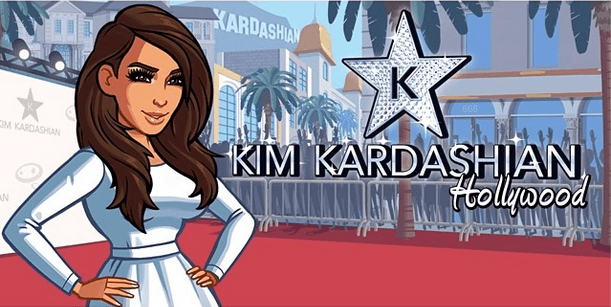