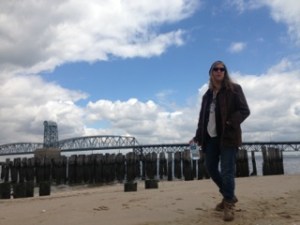 Klaus Biesenbach stood in the middle of the crowded chapel at Fort Tilden on Sunday, and when chatter threatened to drown out the angelic sounds of The Forty Part Quartet, an installation from 2001 by Janet Cardiff, he raised his hands like a preacher, swung them down and let out a great loud “SHHHHH!”

The talking stopped at once, and the only sound was that of the 40 voices from 40 speakers, and the rolling waves from the beach in the background.

Mr. Biesenbach, the director of MoMA PS1, had reason to ask the sun-drunk kids in beachwear to tone down the giddiness before the altar. Working beside the Rockaway Artists Alliance, the National Park Service and the Jamaica Bay-Rockaway Parks Conservancy—along with his friend and fellow Rockaway resident Patti Smith—Mr. Biesenbach spent the last few months scrambling to set up an ambitious public exhibition, “Rockaway!,” that spans different spots within Fort Tilden, the secluded old military base that was roped off after Hurricane Sandy.

The results are certainly worth a trip to the last stop on the A train, and there was a huge turnout for the opening. In addition to the mob inside the installation by Ms. Cardiff in the renovated chapel, a line four dozen deep snaked out from a ramshackle rusty building on the edge of the small abandoned village. Ages ago, it was a locomotive repair facility, but the spot’s become a space littered with useless shells of machines, warped wood and iron, and strangely, chairs from some bygone auditorium.

Currently, it hosts artwork by Ms. Smith. The people waiting anxiously to enter the barely standing heap of metal ravaged by time and Sandy were a stark mix, half plucked from the corner of Grand Street in Soho where Acne Studios abuts Team Gallery, half leather-faced Rockaway lifers with their deep borough brogues cutting through the typical art world chatter. After standing in the hot sun for some time, those in line were led into a long-abandoned spot where even the graffiti seemed ancient, and in the middle was Ms. Smith’s installation Resilience of the Dreamer, a four-post canopy bed, its white linens flapping over a gilded frame.

“What am I supposed to do with this?” said a heavily tattooed man. He was pointing to a tub filled with smooth rocks, another work by Ms. Smith, called Font and installed in a cubbyhole nook elsewhere in the dilapidated factory. His buddy, in a leather jacket, shrugged. (You were supposed to take the stones.)

Out of the factory, there’s an exhibition of Ms. Smith’s photographs, mostly of the modest possessions of her favorite dead writers—Rimbaud’s spoon! Bolaño’s chair!—and, inevitably, their graves. Ms. Smith was on hand herself, there to read a few of Walt Whitman poems alongside fellow artist James Franco, another of Mr. Biesenbach’s close confidants. Mr. Franco—straggly beard, sunglasses, Deth Killers of Bushwick jacket—had arrived just in time for the reading, and made his way toward the stage through a throng of young women screaming and snapping selfies. Mr. Biesenbach introduced Mr. Franco and Ms. Smith with a story about traveling out to the Rockaways shortly after Sandy had destroyed a large swath of the waterfront.

“James and I wanted to surprise Patti—as a birthday surprise!—and we said can we pick you up at 8:00 in the morning on your birthday,” Mr. Biesenbach said. “So, we ended up getting a car, and this was just a couple of weeks after the hurricane hit, and we said, we’re driving out to the Rockaways…And then we went to Breezy Point. And there were these toys and photo albums on the ground, and pieces that were so dear to people who owned them. And then we drove back to the Rockaways, and there’s Riis Beach parking lot, and there was all this wooden furniture, and there was a pile of old mattresses. Knowing Patti, and knowing how much a bed is a place to be safe warm and dry—I think that really inspired her.”

After Mr. Biesenbach finished his remarks, Mr. Franco joined Ms. Smith on stage, opting to not remove his sunglasses. At this point, Mr. Biesenbach had walked to a different part of the stage, taking selfies from various angles. Mr. Franco played up the physical nature of the racier sections of Whitman’s Leaves of Grass, drawing out certain words for emphasis and at times performing tiny thrusts.

“I celebrate myself and sing myself,” Mr. Franco said, and several young girls started cheering.

“Hips, hip-sockets, hip-strength, inward and outward round, man-balls, man-root, strong set of thighs…” Mr. Franco said, and the catcalls burst out from the audience.

“Oh… my… body!” Mr. Franco said, and now everyone was cheering.

The poetry portion was followed by a full-on performance, before which a nearly unrecognizable Michael Stipe, in a voluminous beard and big sunglasses and bright ski cap, took the stage.

She was joined by her longtime guitarist, Lenny Kaye, and her daughter, Jesse Paris Smith, and they played a mix of classics and ballads. The seemingly indefatigable Mr. Franco appeared to be taking a nap. Ms. Smith closed with a rousing rendition of “People Have the Power” featuring Mr. Stipe, Mr. Biesenbach, Mr. Franco (now awake) and MoMA PS1 board member Agnes Gund on backup vocals. Hell of a supergroup! (Not all the people had the power, however—one woman managed to sneak onstage as the song ended shouting “I wanna talk to Patti!” only to be escorted away by Visionaire co-founder Cecilia Dean).

After the performance, Ms. Smith told us she was too tired to talk. She was sitting with friends in the gallery space, surrounded by her photographs. After a few moments, Mr. Biesenbach appeared looking as sharp as ever—the only guy who goes to the beach in a suit.

“It was all so good, it made me very hungry!” the PS1 director told us. He wasn’t kidding—Mr. Biesenbach proceeded to consume an entire tub of hummus after four fist-sized scoops of pita chips, before immediately tucking into the second tube, devouring half of that one, too.

The party migrated to the Rockaway Beach Surf Club, a hippiefied joint where “Rockaway!” will present works by artists such as Marina Abramović, Elizabeth Peyton and the Bruce High Quality Foundation, among many others. “People Have the Power” had been switched out for a DJ blasting “Turn Down for What,” so we left for a more intimate gathering at Mr. Biesenbach’s house, on 86th Street. It was a decidedly beachside affair—cans of Budweiser and Heineken mini kegs in ice, bags of Doritos in their bags on a picnic table, a rare sighting of Mr. Biesenbach without a blazer on.

Filed Under: Arts, art by the sea