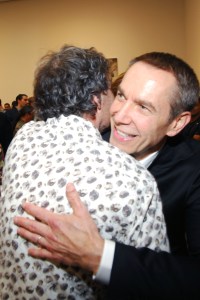 If you’ve been having trouble sleeping lately, it’s probably due to the unquenchable feeling of excitement and anticipation roiling the city—if not the world—in the lead up to the Whitney Museum’s “Jeff Koons: A Retrospective.”

Shortness of breath? Nausea? Nervous tingling in your extremities? Sounds like you need a little Jeff Koons for what ails ya! Reader, we’ve got a problem here, and the only remedy is a heaping pile of Koons. JEFF KOONS.

Remember that time Jeff Koons was interviewed by Naomi Campbell for Interview magazine and he called Michael Jackson a “contemporary Christ”? Oh, Jeff. You so crazy!

Remember that time Jeff Koons accepted the U.S. Department of State Medal of Arts from Hillary Clinton, then Secretary of State, only after telling Peter Schjedahl of The New Yorker “I can’t vote for Hillary Clinton” in the 2008 presidential election? Koonseyface, you devil.

Remember that time when Jeff Koons–like everyone’s favorite overpaid, under-qualified boss–said of his artistic practice “I’m basically the idea person…I’m not physically involved in the production. I don’t have the necessary abilities, so I go to the top people”? The idea person! Koons is up in the ivory tower, all of us are just down on the streets, working for him. You might say our whole lives—no, the entire world is dedicated to advancing the Kareer of Koons!

People, there are less than 24 days before “Jeff Koons: A Retrospective” ushers in a new era of enlightenment and peace.