Louis CK is a comedian who obviously thinks a lot about difficult issues before he portrays them in his surrealist New York comedy-ish program, Louie. That’s not to say that he’s always to pull off the trick of showing that Louie (the creator of the show) is different than Louie (the character in it). The episode with Sarah Baker this season, where a plus-sized love interest literally proclaimed that she was speaking on behalf of all fat women, felt particularly preachy and misplaced, even if you could practically see Louie’s good intentions waft through the scene.

But at least when Louie swings, it swings big. Take last night’s episode for example, where Louie (the character) tries to force himself on his longtime lady friend, Pamela, leading her to conclude “This would be rape if you weren’t so stupid. God! You can’t even rape well!”

It was a disturbing scene, intentionally so. Unlike the episode of GIRLS last year, where Adam’s actions towards Natalia were described by many as an instance of “grey rape,” Louie couched this scene with a seven-minute monologue about the threat men pose to women in the dating scene. Though this episode was written and shot before Elliot Rogers and #YesAllWomen, last night’s episode draws from the same well-source, and it’s hard not to be impressed by Mr. CK’s cajones in putting his own face to such a despicable, everyday form of assault.

But the question is: how do we go on from here? We’ve talked about unlikability in characters before–everyone from Hannah Horvath to Walter White to Don Draper–but even on Mad Men, Don’s never crossed that line, and the character who is portrayed a rapist gets sent packing to Vietnam. (Bye, Joan’s terrible husband!) GIRLS would be the closest analogy, where Adam’s comeuppance comes in the form of an amazingly foul-mouthed Amy Schumer as Natalia’s best friend, but even then, his sexual misconduct is swept under the rug, and the focus is on his dumping of Nadia, not the fact that she protested that she didn’t like the rough play.

There’s a reason for that rapists aren’t portrayed in the realm of cool antiheroes: because their actions are so despicable, it immediately alienates the audience from any empathy they might feel with a character. And even if you don’t like Walter White, you’re supposed to identify with him. It’s going to be interesting to see how this is handled in Louie, where our hero has always had schmuck-like tendencies. Louie’s saving grace, as he’s repeatedly told by other characters, is that he’s a good father to his two young girls. It’s going to be hard to reconcile that statement after seeing him try to molest Pamela, who had been babysitting Jane and Lilly, who were in the house at the time. And though Louie has a tendency towards dream-logic, where his sister(s?) can be played by a variety of actresses and situations are often left unresolved, never to be referred to again, it’s hard to imagine the consequences of Pamela not reverberating throughout the rest of the show. (Well, especially since the episode was called “Pamela: Part 1.”)

Even if they never mention last night’s episode, ever again, Louie won’t be the same program about a lovable schmo anymore. The question is: what will it be? 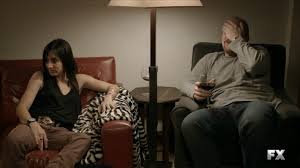